Wellness Checks Are All Over The News—But What Are They?

Police intervention in mental health crises have long been problematic, even fatal. Advocates are pushing for alternatives. 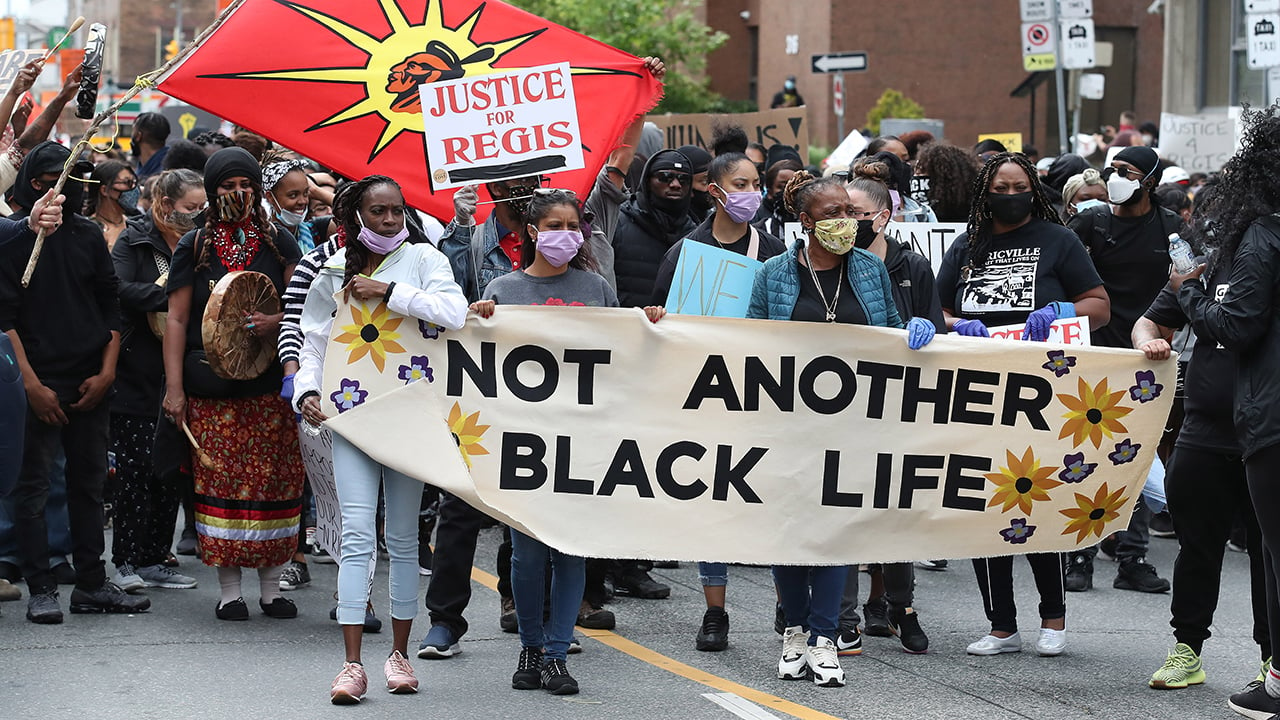 A march to police headquarters in Toronto on May 30, 2020, in honour of 29-year-old Regis Korchinski-Paquet, who fell from the 24th-floor balcony of an apartment building during an interaction with police. (Photo: Steve Russell/Toronto Star via Getty Images)

Here’s a list of BIPOC people who have died during mental health-related interactions with Canadian police in the last three months:

On June 20, Ejaz Ahmed Choudry, who was 62, was shot and killed by police in his apartment in Mississauga, Ont., after police were called to “check on [his] well-being.” On June 12, Rodney Levi, a Metepenagiag Mi’kmaq man, was shot to death by RCMP in Sunny Corner, N.B., in the backyard of a church minister, where he had gone to ask for mental health help and guidance. On June 4, Chantal Moore, a 26-year-old woman from the Tla-o-qui-aht First Nation in B.C., was also shot dead by police in New Brunswick, by an officer who came to conduct a wellness check at her Edmunston home. On May 27, Regis Korchinski-Paquet, a 29-year-old Indigenous and Black woman, fell from the balcony of a Toronto apartment after her mother and brother called the police for help as Korchinski-Paquet was experiencing severe mental distress. On May 5, Caleb Tubila Njoko, who was also Black, fell from a balcony in London, Ont.—after his mother called the police because she was concerned about Njoko’s mental health. And On April 6, D’Andre Campbell, a 26-year-old Black man living in Brampton, Ont., was shot in his home after he called 911 for assistance during a mental health crisis.

Interactions between police and people in mental distress have been problematic for a long time. According to a 2018 CBC report, more than 460 people in Canada died during police interventions between 2000 and 2016. Of those killed, 42 percent of them were mentally distressed.

That’s particularly troubling because police-involved deaths of Black and Indigenous people are disproportionate to their numbers in the population. According to the Globe and Mail, more than a third of the 61 people fatally shot by the RCMP between 2007 to 2017 were Indigenous. In 2016, they made up only 4.9 percent of people in Canada. A CBC report showed that of the 461 victims of fatal police interactions between 2000 to 2017, 43 were Black. Black people accounted for about 9.2 percent of cases, while they make up just 3.5 percent of the Canadian population.

Non-emergency calls to police regarding mental health crises are often called “wellness checks,” but the term has never been very well defined. And considering how often they end in tragedy, particularly for Black and Indigenous people, advocates have long been pushing for alternatives.

What are wellness checks?

There is no standard definition or protocol for wellness checks across Canada. “A wellness check is a very general term,” says Meenakshi Mannoe, the Criminalization and Policing Campaigner at Pivot Legal Society in Vancouver. She says police have also used the term “in reference to things like street stops and carding,” which are not related to mental health. That said, the term has become strongly associated with mental health calls as police intervention in such crises has risen in Canada.

According to a 2015 report laying out a mental health response strategy for the Ontario Provincial Police, the service has seen a steady growth in calls for services related to mental health, from 8,682 in 2007 to 12,337 in 2013—a 42 percent increase. That’s meant “a resulting increase in total officer hours spent responding to these occurrences by 65 percent,” the document states. This trend is true across the country, according to the Mental Health Commission of Canada.

According to Mannoe, this increase is a result of Canada’s underfunded mental healthcare infrastructure, which has rendered police officers mental health first-responders. “They’re working within a system that’s super under-resourced, and they’ve become the line of defence,” says Mannoe.

What are some of the criticisms of wellness checks?

One major criticism revolves around police training in mental health response. Researchers and critics point to the lack of quality training in “de-escalation,” or techniques that can calmly resolve situations of psychiatric distress. “From what I’ve heard…the attendance of a uniformed armed police officer when someone is in psychiatric distress just serves to escalate the situation,” Mannoe says.

Police know this, at least in Toronto, where former Supreme Court Justice Frank Iacobucci studied encounters between the force and people in crisis. In 2014, he reported that many officers had “a lack of knowledge or ability on how to de-escalate effectively.” That lack can result in the use of force.

Then, there are the issues of racial profiling and over-policing of Black and Indigenous communities. A report commissioned by the City of Montreal, for example, found that Black and Indigenous people were four to five times more likely to be stopped by the police than white people between 2014 and 2017.

While some police do receive training in the unconscious bias that can lead to racial profiling, Mannoe says that’s not enough. “We know that one-time training is totally inadequate for addressing these really deep-rooted societal stigmas,” says Mannoe. This week, CBC reported that Vancouver police training on anti-Indigenous racism consists of a 45-minute video and a one-day session with Indigenous elders.

Because this history of over-policing and violence has led to a deep distrust of law enforcement in Black and Indigenous communities, wellness checks have also been criticized as a barrier to good mental healthcare.

“The last thing you do if you’re Indigenous and you have a family member in crisis is call the RCMP,” says Rod McCormick, a professor of Indigenous health at Thompson Rivers University and the director of the All My Relations Centre in Kamloops, B.C. He points to recent mental health calls on B.C. reserves as an example of why. “In one case, over 50 cops from Kamloops and all the surrounding areas came and shut down the highway. It was a psychiatric incident, but they thought it was hostage taking or something.”

What are some alternatives to wellness checks?

Better mental health care is one of the reasons given for calls to “defund the police” in order to re-allocate taxpayer money that goes towards law enforcement into community services.

“We live in a world where hospitals were short personal protective equipment during a pandemic, but the police force has unlimited money for tear gas and tanks and other militarized things,” said Syrus Marcus Ware, a core member of Black Lives Matter-Toronto, in a recent interview with TVO. He touched on the recent resignation of Toronto police chief Mark Saunders. “We don’t need to spend $400,000 on a new police chief. We need to reinvest that money into our community.”

Mannoe says that peer-led mental health programs, through which community members respond to people in crisis, would be far more effective than police intervention. She says it’s an alternative that is entirely possible—and has worked for decades in Vancouver, which has been hit hard by the overdose crisis.

“Again, we’ve failed to see meaningful action from the government to address root cause issues like safe supply and decriminalization of drugs, but peers have stepped in to create their own networks of care,” she says.

McCormick says that support workers within the community are needed as culturally relevant “bridges” between those in crisis and the larger mental health system, to help them navigate what services are available and be advocates for those too ill to advocate for themselves.

“If communities had a position like that, they could not only know what mainstream services are out there and how to access them, but they could also be aware of what traditional services are available, like which elders or medicine people do what, what sort of healing ceremonies are available,” he says. The ultimate goal, for him, is that Indigenous people in need of mental health care have someone better to call than the RCMP.