We dare you not to smile: Five famous moments that will make you happy

Some believe that greatness inspires greatness. By that logic, does happiness inspire more happiness? It's impossible not to smile watching these moments 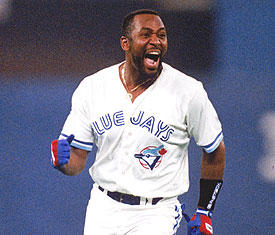 Some believe that greatness inspires greatness. By that logic, does happiness inspire more happiness? If so, have a look and be moved by these five famous happy moments. We challenge you not to smile.

1. Joe Carter’s 1993 World Series home run: Now I’m not a huge sports girl, but I am a baseball fan and this might be my all-time favourite moment in baseball—probably because I was a new resident of Toronto at the time and, like virtually the rest of my Torontonians, was following the Jays’ uber-successful season that year. Sure, the Game 6 home run that scored the 1993 World Series win was a happy moment in itself—but personally, I love the joy on the man’s face as he runs—well leaps and jumps to the bases.

2. Florencio Avalos emerges: I debated this one—which one was the happiest moment–when Avalos, the first of the 33 Chilean miners, arrived safely above ground after 69 dark, desperate days of being trapped in the San Jose mine? Or when Luis Urzua, the miner’s shift commander and the last person to come up from underground emerged and we could breathe easy again knowing all the miners had made it out alive? In the end I selected Avalos not only because of his emotional reunion with his wife and son seen here, but because his rescue gave us the hope that the other 32 men would make it.

3. Sailor gets a smooch: The scene was New York’s Times Square, 1945 and it was the end of the six-year World War II. LIFE magazine photographer Alfred Eisenstaedt just happened to be in Times Square to capture this iconic moment on film—the joyous celebratory kiss between a random sailor and nurse. While the sailor was unfortunately never identified, the nurse, Edith Shain, died this past June at the age of 91.

4. Boyle Belts it out: Okay, a bit of a schmaltzy moment and they may have just set us up as an audience, but how could you not smile when you the frumpy 47-year-old Boyle, who the audience was clearly smirking at and muttering about, sang I Dreamed a Dream from Les Miserables so unbelievably beautifully and movingly on Britain’s Got Talent.

5. Roberto Benigni wins an Oscar: Oh, there were so many Oscar moments to pick from (Sally Fields’ “You like me, you really like me!”/Halle Berry scoring the first Oscar for a black actress/Cuba Gooding Jr.’s happy but odd acceptance speech and many, many more…) but it’s Benigni’s win for Best Foreign Language Film for the tragically beautiful Life is Beautiful at the 71st Annual Academy Awards that will make you crack a smile again. After all, at an event so full of dignified behaviour and forced smiles, how often do you see an Oscar-winning actor climbing on chairs and jumping up stairs like a five-year-old to celebrate his win?

6. Bonus item! Oprah’s Craziest Audiences: While I like the next woman loves free stuff, it’s the audience’s  reaction at Oprah’s Favourite Things episodes that just makes me laugh every time this show is on. Enjoy!