The Case For Good-Enough Sex

My husband and I teeter dangerously close to the sexless marriage threshold. But at 39, I'm not willing to throw in the towel on my sex life.

* Yes, this is a pseudonym.

It’s a February tradition for some women’s magazines to offer easy ways to spice up your sex life: Eight new positions to blow your mind! Ten lacy thongs to help you strut your stuff! But now—perhaps out of a recognition that for people in long-term relationships, cheap tricks are no match for the deadly combination of familiarity and fatigue—a new category of tips has emerged that’s focused less on spicing sex up and more on making sure it happens at all. We’re told to schedule it (presumably into our shared calendars, between grocery shopping and getting the car serviced) or to do it in the morning, when we’re not as tired. Then there’s the oxymoronic suggestion of planning to be more spontaneous.

These tips can work, if success is measured by getting the deed done. I know, because I’ve tried them all. But let’s be real: Scheduled sex sucks. It becomes just another transaction with your partner, at a time when nearly all your communication feels that way. That’s not exactly a recipe for climax. And spontaneous sex has its own pitfalls. The last time my partner and I had 20 minutes of found time, we raced upstairs like rabbits on speed. I tried to overlook that he was slick with sweat from a just-finished jog. He tried to ignore that I hadn’t showered and had two cherry Tums on my breath. Neither of us was entirely successful. 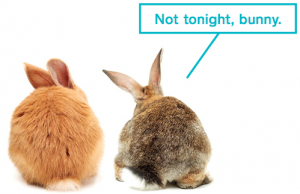 Doing it in the morning works great—until you have kids. They know when you’re horny. It’s some kind of sexual sixth sense. The first time I set my alarm for 6 a.m. to squeeze in a pre-dawn shag, my kid peed the bed at 5. The next time I did it, she was awake an hour before, puking. There’s only so many times your morning sex can be derailed by a third party’s bodily fluids before you throw up your hands. But while I can accept the death of morning sex, I’m not, at 39, willing to throw in the towel on our sex life entirely. I miss it. My partner misses it. When we collapse in bed at night and immediately fall silent, it’s hard not to mourn the way things used to be. We never believed we’d reach the stage in life when “not tonight, honey” sounds hopeful, in that it doesn’t rule out the whole month. But here we are.

We’re not the only ones struggling with how to get more. An infamous 2003 Newsweek cover story announced that 15 to 20 percent of couples have sex no more than 10 times a year, which meets the popular definition of a sexless marriage. A New York Times article pointed out that Google searches for “sexless marriage” were three and a half times more common than those for “unhappy marriage.” And in Chatelaine’s own survey of 1,000 Canadian women between the ages of 35 and 45, 31 percent said they have sex less than once a month.

My husband and I teeter dangerously close to the sexless marriage threshold, pushed there by the demands of our jobs and our family, our constant exhaustion and perpetual lack of time—to sleep, to exercise, to take care of ourselves. Our unambitious “sex schedule” is the only thing that keeps us from going over the edge. More than once, we’ve gotten stuck in the thorny chicken-and-egg admission that we’re both tired of not getting enough sex, but also too tired to do anything about it. Sex is the thing we ignore because, unlike so many other demands on our lives, we can. But the truth is, there’s a wedge between us that’s never been there before.

It’s a common problem heard by Caroline Pukall, a psychology professor at Queen’s University, both at her sex-therapy clinic in Kingston, Ont., and in the halls, where some colleagues have quietly broached the topic. “The first thing we have to do is validate how people are feeling,” she says. “You keep waiting for something to change. But guess what: You have to force the change.”

I get that; hence all the scheduling and alarm-setting and antacid-scented attempts. But none of it has resulted in having great sex, which doesn’t exactly leave either of us hotly anticipating our next encounter.

Part of the problem, Pukall says, is that people tend to focus solely on the act itself. Just do it, the thinking goes, and you’ll want to do it again. What gets lost is the fact that desire needs to be cultivated. “People think desire will be spontaneous and completely natural. It’s not,” she says. These days, we expect our needs to be met immediately, the way Siri jumps right on our questions and an UberEats lunch is just a tap away. “We almost expect our bodily responses to be instantaneous. And it’s really unfair,” Pukall says. “Most people work from a place of sexual neutrality. We’re not turned on all the time, and you can’t expect [to be] just because you’re having a date night.”

So if you’ve scheduled a night to have sex, she says, send some steamy text messages to your partner a few times throughout the day. Flirt a bit through dinner. “Keep that momentum going,” she says. “Hold on to those really good feelings and look forward to it.”

Looking forward to it is one thing, but when sex is infrequent, the stakes are high. The pressure to have it be good can be insurmountable. If it’s not good for both people, despite best intentions, that disappointment is going to last. “And if your partner is having a great time and you’re not, that’s damaging to your partner as well,” Pukall says. “If he or she realizes that you’re not feeling pleasure, it’s like a sledgehammer to the knee.”

So now I have to worry about pulling a sexual Tonya Harding? How can good sex, between two committed people, be so hard to figure out? Says Pukall, “The more pressure we put on ourselves, the worse it is.”

Maybe that’s the key. There are plenty of areas in our lives where we forgive ourselves for failing to reach a certain bar. For instance, instead of cleaning the bathroom, I pee with my eyes closed. I make loud declarations about embracing my grey when I don’t have time to touch up my roots. My husband and I used to experience huge amounts of stress over figuring out dinner after a 10-hour workday, and then we agreed not to sweat it: Sometimes it’s home-cooked, sometimes it’s takeout, and sometimes it’s cheese and crackers.

Maybe we need to agree that we won’t sweat the cheese-and-crackers sex, either. Maybe that will allow us to reap the benefits of just being together. Acknowledging that the goal at this stage should be maintaining sex—rather than expecting to excel at it—could liberate us from the feeling that we’re failing.

Research on sexual motivation and outcomes by Amy Muise, a social psychologist who studies sexuality and relationships at the University of Toronto Mississauga, supports this idea. She says that people feel anxiety not just over how much sex they’re having but also about whether it’s being performed in a certain (read: acrobatic and multi-orgasmic) way. “It’s important to maintain a sexual connection, but you should have realistic expectations,” she says. Muise’s research shows that when people engage in sex to avoid a negative outcome—for example, making sure it hasn’t been too long between business times—the result is less positive. “But when people reframe the idea to focus on positive outcomes, such as ‘I really want to feel closer to my partner,’ that leads to positive sexual experiences and feeling better about the relationship.”

In other words, just do it—but not because you think you should. Not because you’ve found nine minutes after the kids have gone to bed and your phones have fallen silent, and before exhaustion has completely robbed you of the will to move. Do it because it’s a chance to spend time with your partner, an opportunity for a rare, intimate (and non-transactional) interaction. Maybe you’ll climax, maybe you won’t. Go into it knowing that it’s the showing up that counts.