The CBC power couple sharing life on (and off) the air

They share a house, a marriage and three young sons. Now CBC's Rosa Marchitelli and Rob Brown are also sharing a newscast. The couple chats candidly about what working and living together is really like. 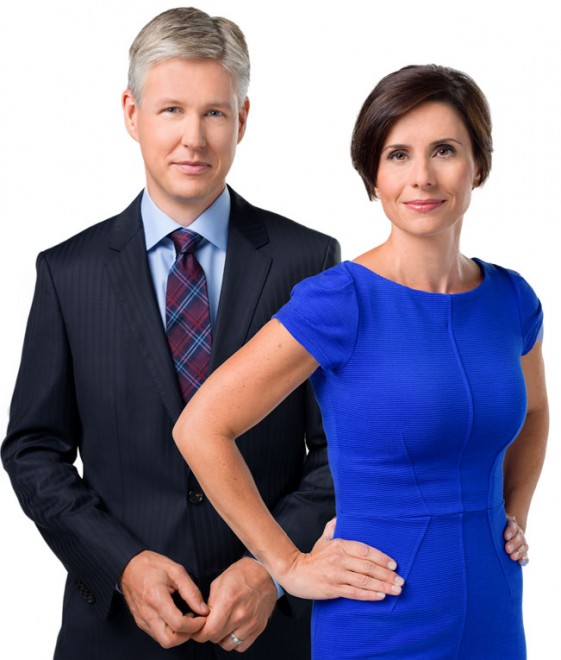 Husband and wife duo Rosa Marchitelli and Rob Brown are the new face of CBC News Calgary. As one of the industry’s only on-air couples they’ve been leading the Calgary evening news since their show launched in September.

Here we chat with Brown, a former CTV News reporter and anchor, and Marchitelli, a journalism instructor and former anchor at CBC Vancouver, about their new gig, that allows them to work side by side.

Q: What’s the story of how you met?
Rosa: Rob and I met in an Edmonton newsroom. I first really noticed him during one of his live hits. He was so smooth and confident I thought, “I have to get to know this guy.”
Rob: I met Rosa through her resume tape. It made for an impressive introduction. She was applying for a reporting job in a newsroom I worked in. My boss asked me to look at her tape and give him my thoughts. After seeing her on camera I not only thought she’d be a good fit for the newsroom but for me too! Six months after she arrived she came to the same conclusion about me. Took her long enough eh?!

Q: Was hosting together a dream of yours?
Rosa: We would sometimes joke about the husband and wife team, but never talked about it seriously until the CBC Calgary opportunity came up.

Q: The show’s been on since September. What do you love most about working together so far?
Rosa: I rarely carry cash — and Rob always has it. So I often dip into his wallet for lunch money. Seriously though, the best part about working together is having him right next to me on those stressful work days.
Rob: The feeling that we are in it together. It makes the successes more fun to celebrate and the failures easier to swallow. We understood what the other is going through at work better than we ever have before and that is making us stronger as a couple.

Q: Do people have misconceptions about what life’s like as a couple that lives and works together?
Rosa: It’s funny — everyone seems to have an opinion on it. When we took the jobs, we heard it all. Some people thought it was crazy, others thought it was brilliant. I think both sides were right.
Rob: The most common misconception is that we must be super easygoing to be able to spend so much time together and not be at each other’s throats. We do get along most of the time, but not all of the time. We have our moments of tension.

Q: At work is your relationship different than it is between yourselves and the other employees?
Rosa: We share one dressing room before the newscast. It that too much information?

Q: How do you avoid taking your work home?
Rosa: We try to do that by setting up parameters. For example, we can talk about work at work and on the drive there and back, but not at home. Sometimes we’re successful.
Rob: The simple answer is that we don’t. But we are trying to compartmentalize as much as possible. If there is an issue at home with one of the boys it’s hard not to have it on the mind at work. The same is true about issues in the newsroom making their way home with us. The trick is to flick the switch and commit to keeping work at work and home at home. It’s a daily balancing act.

Q: What’s the most surprising thing you’ve learned about the other person since working together?
Rosa: What a perfectionist Rob is. Rob holds himself to a very high standard.

Q: What’s the best piece of advice you received from someone before starting this new chapter?
Rob: We have received remarkably little advice. The truth is very few people have ever been in this position of working together so closely and so publicly. But you can be sure we’ll have plenty of advice for the next broadcasting couple to come along.

Q: Finish this sentence, “My partner’s strongest talent as a journalist is…”
Rosa: I could write you a list. He is unshakable on live television. He is curious, smart and has an excellent sense of the editorial. If I had to pick one, it’s his passion for journalism. He believes in accountability and has no problem asking the tough questions.
Rob: Rosa has a very keen sense of what stories people will be drawn to and what they will care about. It helps serve the entire newscast because unlike a lot of journalists who write or broadcast for other journalists in an inside baseball kind of way, Rosa never forgets who we are serving and why.