I Have PMDD. Perimenopause Radically Improved My Life

I’ve spent nearly 30 years suffering from horrific mood swings and suicidal ideation from PMDD. Having fewer periods has finally brought me some relief 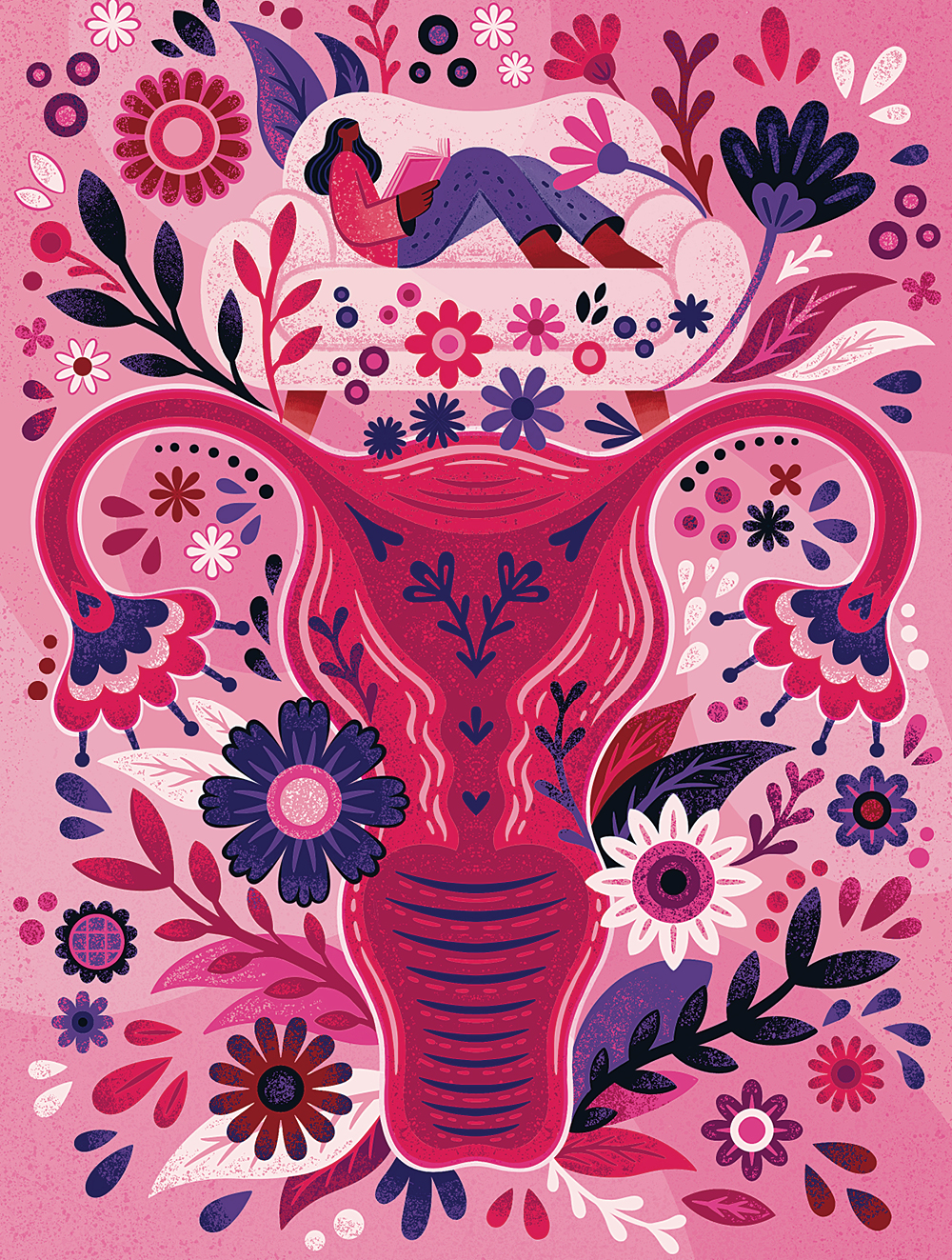 Before I realized what was happening, I was back there again. First, as we were getting ready for bed, I snapped at my partner for turning off a light. Soon after, I was standing ankle-deep in snow on my balcony, bare-legged, while a blizzard swirled around me: my self-imposed punishment for having lost my temper.

This time, I was lucky. It didn’t take long for me to recognize I was encased in the fog of a PMDD episode. The only way I can describe it is like a series of dry riverbeds in my brain suddenly filling up with a viscous liquid of self-hatred. It overtakes me, possesses me. On this particular night, I forced myself to return to bed, where my cat, sensing my emotional state, calmed me by purring on my chest. By the next morning, I was back to normal.

PMDD, or premenstrual dysphoric disorder, is a severe form of PMS that afflicts between three and eight percent of people with periods. Its hallmark symptoms, which usually start in the seven to 10 days before menstruation, are both physical and emotional, including bloating, headaches, high irritability, difficulty in interpersonal exchanges and suicidal ideation. As a recent addition to the Diagnostic and Statistical Manual of Mental Disorders (DSM), PMDD now has several treatment options—including combinations of antidepressants, birth control and therapy. But the first steps to finding relief are being aware of the condition and then getting a proper diagnosis, which can be hard to come by. Dr. Tory Eisenlohr-Moul, a clinical psychologist and associate professor of psychiatry at the University of Illinois Chicago who is studying the effects of the menstrual cycle on mood, behaviour and emotion, attributes slow or missed diagnoses to a lack of awareness, as well as stigma around discussing menstruation and suicidal ideation. “They are uncomfortable topics to talk about,” she says, “but people who have these severe hormonal sensitivities really need [a clear diagnosis].”

I’ve had PMDD all my life, but because no one thought to tie my behaviours to my cycle, I was only diagnosed when I was 39. Until then, I’d thought my nearly 30 years of regular breakdowns were a personal failing, not something caused by an actual physical condition.

I’ve always admired women older than me, primarily for their confidence. Over time, I assumed I’d develop the same self-assuredness I saw in them. And for the most part, I did. Then a day would come where I’d have to scream into a pile of pillows before work or talk myself out of jumping in front of the subway (with the reasoning that I’d make others late), and I’d be back to square one. Every time one of these episodes occurred, it diminished my blossoming confidence. How could I call myself an adult, a professional, I wondered, if I couldn’t just keep it together? I was a failure. Everything was my fault. My fault, my fault, my fault.

This cycle is not unfamiliar to other women who suffer from PMDD. “Usually, about three days before my period, I would have one day, maybe two days, of sad crying. I started getting suicidal thoughts. I’d think, ‘I guess that was just a weird week.’ Then it would happen again. And I had never in my life thought about suicide before,” says Jenny Serwylo, a 38-year-old wedding planner in Toronto, who has suffered from PMDD for about six years. Once her period started, those thoughts would vanish. “It was done. I was fine, everything was good.”

Dr. Jennifer Taylor describes her experience similarly. “I have anxiety generally; the 10 days leading up to getting my period is when it can get really bad. I feel very overwhelmed, like I can’t manage things,” says the 42-year-old, who is a sessional lecturer at York University and holds a PhD in music. “That usually leads to the weepies. Any small thing [can set it off], and sometimes nothing at all. Sometimes I just wake up feeling like that and within 10 minutes I’ll be crying.”

This lines up with the understanding most doctors have of PMDD. “Different people can experience some kind of mild premenstrual symptoms; [those] in the more clinically significant severe range we call premenstrual dysphoric disorder,” says Dr. Jovana Martinovic, a psychiatrist in the Reproductive Life Stages program at Women’s College Hospital in Toronto. “The mood disturbance can look like low or depressed mood, but [also like] more emotional sensitivity.” People may also experience changes in sleep and appetite, as well as in emotional regulation and irritability, which can lead to increased interpersonal conflict. “It reaches the level of PMDD when it’s causing clinically significant distress or functional impairment,” she says. “For some, it can even bring up suicidal ideation.”

Most of my symptoms were emotional, which makes diagnosis tricky. I started using an app to track my episodes against my cycle and realized that my emotional outbursts didn’t line up with my lived reality. I could be experiencing a completely calm, stress-free day and suddenly my sense of self-worth would plummet and I’d invent problems and crises that hadn’t existed a few minutes prior. After Taylor, who is a close friend, told me about her own diagnosis, I went to my doctor with the results of my tracking. She confirmed that PMDD was likely my diagnosis, too.

Finally having a diagnosis made me feel like I could take control of an increasingly untenable situation, but I didn’t know what to tell people. Calling work to say you can’t come in because you feel suicidal isn’t an option for most of us. Nor could I easily explain away a ferocious burst of anger. Over time, I’ve learned to catch myself at the onset of an episode and warn my loved ones to stay away until it passes. And even though I still find myself reciting endless descriptions of my worthlessness, I’m much better at recognizing what I’m doing and attributing it to PMDD. I’ve also found a community of other PMDD sufferers, thanks to people like Laura Teare-Jones, a North Wales-based PMDD advocate, coach and trainer.

“People really do want to talk about this. It’s not that they can’t or don’t want to, it’s just there’s no outlet. Or there’s too much shame or stigma,” she says. Her podcast My Hormones My Health provides community for PMDD sufferers, many of whom, like Serwylo, are just starting to educate their family and friends on the support they need during episodes. “Insecurities really did balloon,” says Serwylo. “Just having the awareness that this is the PMDD talking, I’m now able to say to my friends, ‘Hey, I’m having PMDD.’”

Taylor was lucky. She had a compassionate GP whose curiosity about her regular emotional dips, and the more severe physical symptoms she experienced in the days leading up to her period, led to her diagnosis. But less enterprising doctors may turn to the prescription pad instead of searching out the root of the problem. It’s common for people who menstruate to be dismissed by doctors who attribute symptoms of PMDD to vague “hormonal changes” or general anxiety, and such dismissal can be compounded by the systemic marginalization experienced by racialized women.

Following my diagnosis, my doctor put me on an intermittent course of a low-dose antidepressant. This is a standard approach, taking the drug two weeks prior to the onset of menstruation, when symptoms typically arise. When I had trouble managing the emotional upheaval and sleep disruption that resulted from going on and off the medication, we decided I would start taking it every day. Unless I am under a great deal of strain or have a particularly extraordinary response to my hormonal shifts, this approach has helped a lot, reducing my confidence dips and suicidal thoughts.

PMDD’s inclusion in the DSM also means that better research is underway. This past spring, Eisenlohr-Moul headed a study examining the impact of PMDD on suicidal ideation. Her findings showed that 34 percent of sufferers have attempted suicide at least once in their lifetime—an astounding statistic—while on average waiting 12 years for a diagnosis. “We weren’t sure if the PMDD itself would be associated with these high levels of lifetime suicidal thoughts and behaviours,” she says. “But it really seems to be, at least in our preliminary analysis.” Rates of related behaviours are equally shocking: Suicidal ideation affected 72 percent of sufferers; 49 percent had planned suicide at some point; and 51 percent had engaged in non-suicidal self-injury.

PMDD is already miserable enough, but what happens when you throw the hormonal ebbs and flows of perimenopause into the mix? Typically, says Martinovic, the condition can become more unpredictable. “You’re already sensitive to cyclical hormone changes,” explains Eisenlohr-Moul. “And then now, on top of that, you’ve got more fluctuations coming on.”

As Serwylo got older, she noticed her symptoms changing. “Sometime within the week before my period, I [start having] a day where I just cannot focus,” she says. “During ovulation, I have another day of sadness, depression, anxiety.”

For me, perimenopause brought relief. Now that I’m 44, my PMDD episodes are the exception, rather than the norm. The
night of the blizzard came after a several-month stretch of freedom, the longest I’d experienced a relatively even keel. I’d discovered I was a fundamentally happy person. There were no interruptions to my normal routine or diversions from my ability to cope, at a time when work was more stressful than ever thanks to the pandemic. I was more comfortable giving advice to others and I pushed myself to take professional leaps where I might have hesitated before. Correspondingly, my periods were becoming intermittent. “Could it be,” I wondered, “that menopause might bring about the relief I’d yearned for my whole life?”

There is reason for hope. “Post-menopause, when there isn’t that same variability in hormones, there does seem to be some relief from PMDD and those sorts of symptoms,” says Martinovic. “The brain is still going to be hormone-sensitive,” adds Eisenlohr-Moul, “but the ovaries are no longer going to be hitting you with this wallop.”

I usually know now whether I’m facing a PMDD day when I wake up. If dark thoughts immediately crowd in, then I know I’m going to struggle. But if I wake up and feel optimistic about the day ahead, I don’t have to worry. Luckily, for me, the good days now far outweigh the bad. I can’t wait for the full bliss of menopause.