Is The Peloton Bike+—The At-Home Spin Bike With A Hefty Price Tag—Worth It? 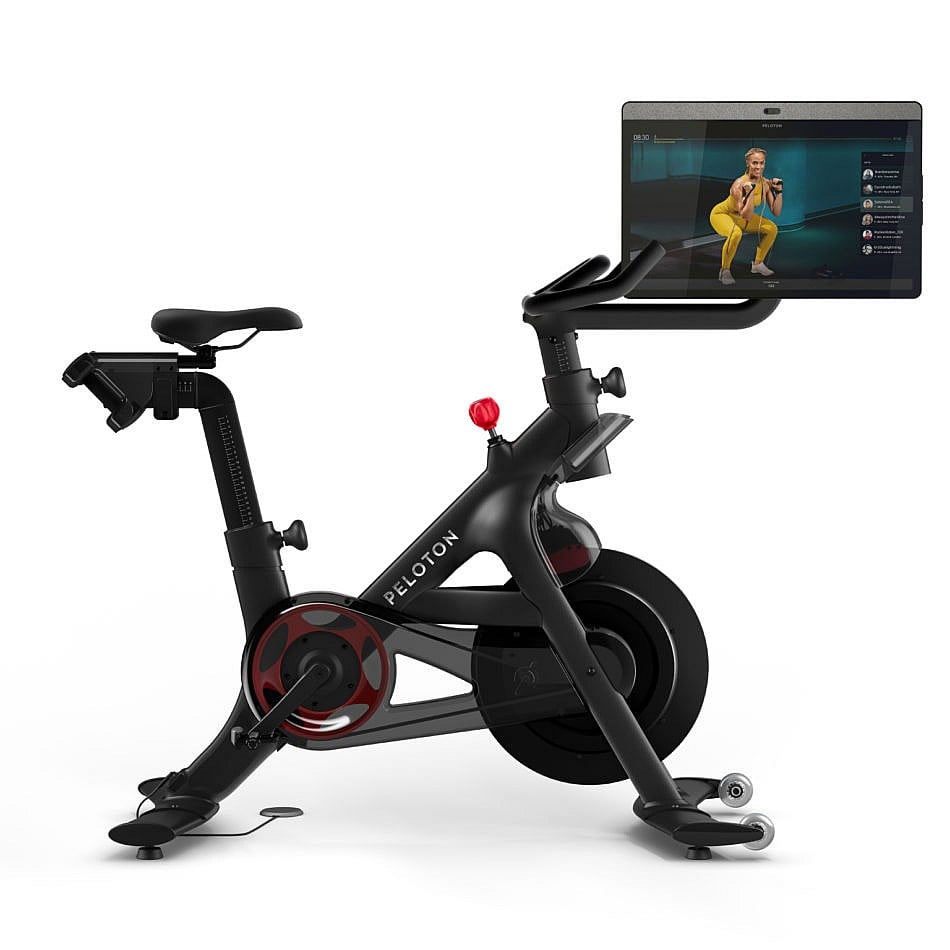 I’ve taken enough spin classes in the past decade to know what makes for a stellar workout: dynamite music, a charismatic instructor and a sweat-drenched, climb-filled routine. I’ve experienced this to various degrees at dozens of studio classes I’ve attended over the years. But I’ve now attained similar spin nirvana from the comfort of my home, thanks to the Peloton Bike+.

The pandemic was tough for people who love group fitness, myself included. (I fully realize this is a highly trivial problem.) Pre-COVID, interval classes at Orangetheory were my preferred workout, but during Ontario’s first lockdown I reverted to running. I returned to the gym briefly in August 2020, before I got scared straight by the super-spreader event at the Hamilton, Ont. spin studio that, from all accounts, appeared to have done a good job of following what were then the public health protocols. Enter the Peloton. I was offered a chance to try out the just-released Bike+ for a three-month period starting in September 2020. The timing could not have been better.

For those not familiar with Peloton, here’s the lowdown: the company is best known for its wi-fi-enabled stationary bike, which lets you stream live and pre-recorded instructor-led classes that you watch from a HD touchscreen attached to the bike. Classes are filmed in studios in New York and London which are, in non-pandemic times, open for Peloton users to attend IRL on the row of  bikes behind the instructor’s ride. The company  bills itself as bringing “the community and excitement of boutique fitness into the home,” as riders can compete with one another on the digital leaderboard–or hide it altogether—join groups who share common interests through the use of tags (#WorkingMomsofPeloton, #TrueNorthStrong) and virtually high-five other riders (a little awkward, but then again, so is the real deal).

There’s no denying the Peloton Bike+ is fancy, and it comes with an equally fancy price tag: $3,295 for the Bike+; the original Peloton Bike—which has fewer bells and whistles, more on that later—was discounted to $1,895 from $2,495 in August 2021. (There are also monthly payment plan options for both; and you also also search out used options on Kijiji and Facebook Marketplace.) In addition to the bike itself, you’ll also pay a monthly “all-access fee” of $49 for unlimited spin classes—as well as running, yoga and strength training workouts, which can also be accessed via the Peloton app, which is a mere $16.99 per month. Despite the hefty price tag for its bikes, Peloton sales soared during the pandemic (but have since slowed).

The $3,295 question: is the Peloton Bike+ actually worth it? I clipped in to find out.

The Peloton arrived at my house in a sleek, black, Peloton-branded van and was set up by two technicians within half an hour; mine came with clip-in spin shoes, two sets of free weights and a yoga mat to try the full suite of Peloton classes. (These extras, if you’re so inclined, add another $200 to your bill, but if you already own spin shoes they should be compatible with the Peloton.) After the technicians left, I quickly created a profile and jumped on for my inaugural ride.

My first impression: I’ve never ridden on a smoother spin bike. I also couldn’t believe how many classes were available in the library–varying from 10-minute climbs to 45-minute intervals-and-arms classes to 60-minute long rides. There are usually around six live classes a day, but there are also dozens of pre-recorded classes to try. In my experience, hundreds of other people are usually riding in real time on recent pre-recorded rides, which is good if you can’t make a live class but want to compete with others on the leaderboard. Similar to Soulcycle, many Peloton instructors have attained celebrity status among loyal riders; my personal favourite is Emma Lovewell, a crunchy granola earth goddess with intensely kind vibes and an obsession with ’90s music. And speaking of music, there’s a Peloton class for most tastes: ’00s rock rides, Bon Jovi-themed rides, new music listening parties, etc. (The company spends a literal fortune in music rights.)

As the weeks wore on—and gyms shut down again in Toronto, where I live—I realized there was no better antidote to a dreary pandemic day than sweating bullets to Sophie B. Hawkins while admiring Emma Lovewell’s impeccable abs. Sure, the community element isn’t the same as a group class, but I loved competing against other riders virtually, and the analytics the bike provides—both during the ride (cadence, watts, resistance, speed, distance, calories) and afterward—are superb for competitive types. After an initial period of shyness, I started high-fiving up a storm and joined #TeamLovewell, a tag which which could help me find other Emma obsessives to do group rides with in real time, if I was so inclined. 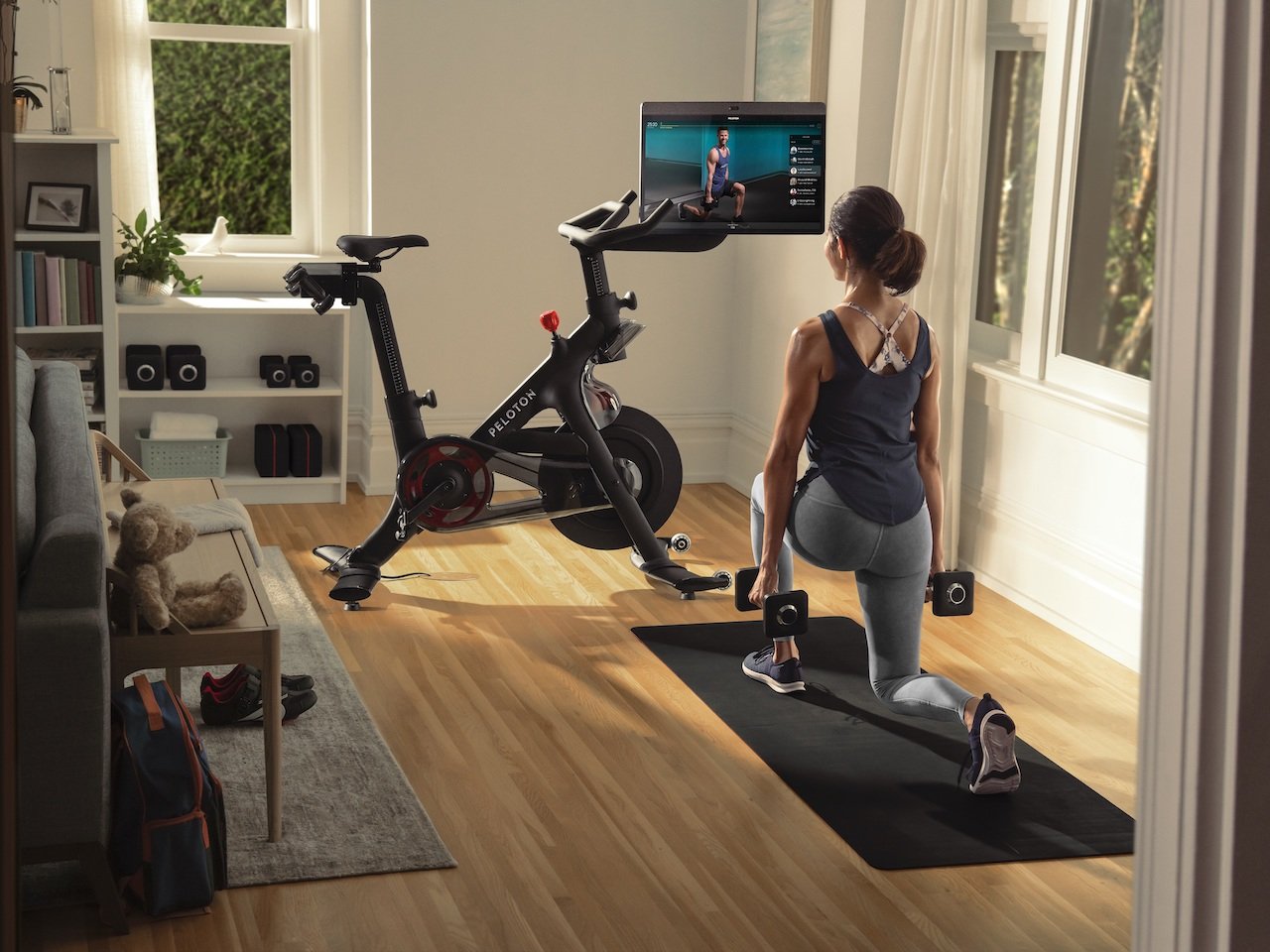 The Peloton Bike+ screen rotates so that you can also use it for off-the-bike workouts.

I typically did 30-minute rides—which left me so winded I’m sure my neighbours could hear me heaving—but I also tried a Bike Bootcamp, in which you do blocks of spin interspersed with full-body weight sessions on the floor. I was excited to try it because it was the closest I’d get to Orangetheory at home, but switching between spin shoes and running shoes for the strength intervals felt a little clunky. (Intervals-and-arms classes, where you lift weights while on the bike, are more seamless.) During my loan period, I typically spun four times a week. My husband, who loathes all forms of group fitness, also used the bike several times, in regular sneakers, for scenic rides through various locales viewable on the touchscreen—like the French countryside or Golden Gate Park.

But the $3,295 question remains. I’ve never tried the standard Peloton Bike, but for comparison’s sake, here are the main differences between the Bike and the Bike+:

In my experience, the only truly useful Bike+ feature is auto-follow resistance, which ensures you’re not coasting when you should have the resistance cranked. Otherwise, the added features don’t, for my purposes, justify the added cost.

As my three-month trial drew to a close in December 2020, I convinced myself to say goodbye to the Bike+—and even booked a time for it to be picked up. But as the pick-up date drew near (and Ontario gyms remained closed) I had a change of heart. One year later, I have absolutely no regrets. I ride the bike at least four times a week and I’m also a regular in Emma Lovewell’s Crush Your Core classes. I truly love the Peloton experience, although I think the basic Bike is a smarter and slightly more affordable purchase. (The only reason I decided to purchase my Bike+ and not downgrade to a Bike was because at the time, the waitlist for a basic Bike was several months long.) Most shocking of all, I quit my gym membership. For me, the ability to get a great workout with zero commute time—and zero scheduling—is truly impossible to beat.