It wasn't until after I had eagerly hopped into the kayak, shoved my life jacket into the boat's cavity and grabbed my paddle that I realized what an odd moment this was. 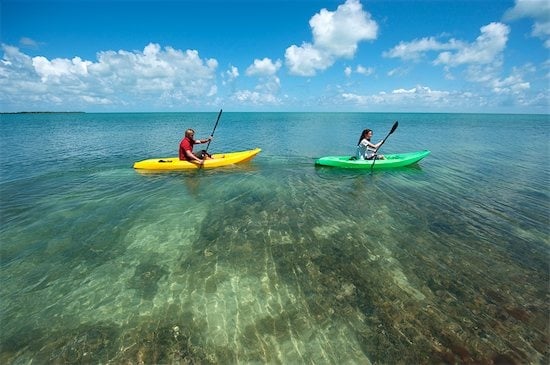 It wasn’t until after I had eagerly hopped into the kayak, shoved my life jacket into the boat’s cavity and grabbed my paddle that I realized what an odd moment this was. After all, I hate kayaking. But there I was, on the soft-sand shores of Turks & Caicos, about to drift into the mangroves to search for stingrays and pelicans. And I couldn’t wait to get paddling.

I was traveling for a story and staying at Amanyara, a blissfully exclusive, private, dramatic and romantic resort on the west end of the island of Providenciales. While still engaging in many of my long-time favourite pursuits – reading, checking emails, sampling cocktails, eating, perusing menus, talking about past/impending meals – I also noticed how drawn I was to physical and outdoor activities. I wanted to stay in motion. Instead of simply dunking myself in the shallow end of the pool to cool off, I wanted to swim laps until I was nearly breathless. I joined a yoga session and found myself disappointed when the hour came to an end. And I found it almost unbearable to be inside, working outside with sunglasses to fight the ever-present glare, and sucking in as much fresh air as possible.

These instincts are new to me, and unrecognizable from anything I felt 10 years ago. As a kid, I was sent to a series of after school activities and summer camps – from horseback riding to performing arts to sports and dance – and I almost universally disliked them. The activities highlighted my lack of coordination, the girls were all sportier and had silkier hair, and the food was almost always awful. The days stretched out before me like a neverending gym class, as I occasionally faked sick and constantly prayed for all of it to be over so I could go home and read books in the privacy of my room.

My friends have long made jokes about the impossibility of taking me camping, I was a complete liability on skis, and I have passed up more intramural sports invitations than I can count. A year and a half ago, about to board a rudimentary bamboo raft tenuously parked on a river bank in the south of China, a friend glanced down at my feet and, amused, said, “Well, you’re dressed for this.” I was wearing leather boots with a considerable heel – which didn’t seem at all inappropriate to me at the time.

But change can sometimes sneak up on you. And sitting in that kayak – barefoot in a bathing suit, paddling through clear turquoise waters and picking up the occasional conch shell – I realized that I was completely content doing something that I used to hate. And, part of the reason that I’m now more into swimming and kayaking and yoga is because over the years I’ve developed a greater interest in being stronger and healthier. Becoming aware of that change, and knowing that it’s possible to embrace positive habits that previously seemed too hard or off limits, made me very happy. And it’s even inspired me to both unroll my yoga mat and hit the pool a little more often – between cocktail samplings and menu readings, of course. (Some things never change.)