The Easiest Kind Of Exercise To Fit In Your Day

One type of exercise we don’t get enough of—and one that contributes greatly to health—is light physical activity. Here’s what it is and how to get more of it. 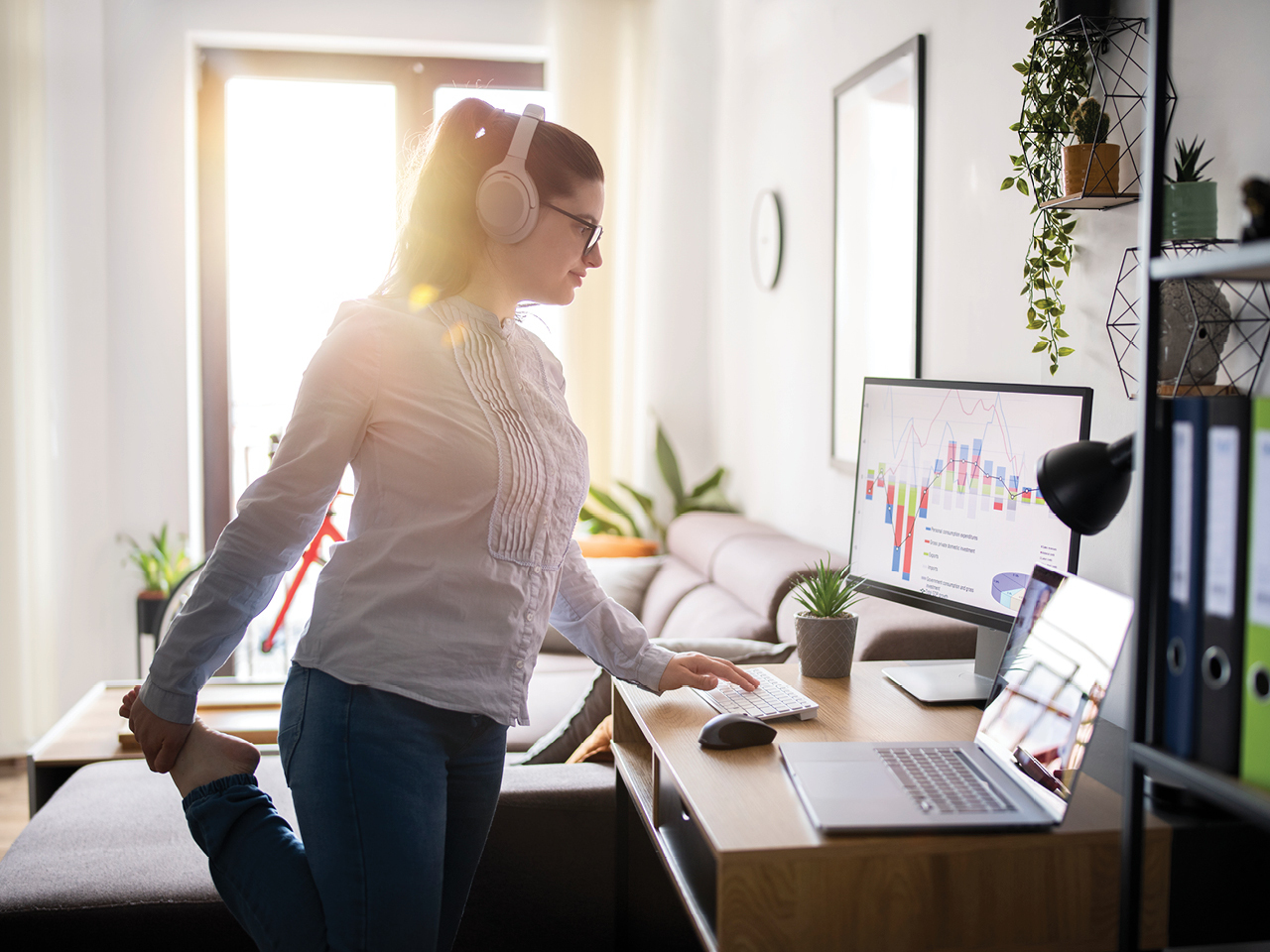 Stretching or using a standing desk—or both!—is a great way to work more light exercise into your day.

Did you start the new year with aspirations of a regular exercise routine? Maybe you vowed this would be the year you run a half-marathon, or started a month-long Pilates challenge. Now life is in the way, as tends to happen, and you see your resolution starting to slip away.

Turns out you can still achieve that goal if you rethink how intense that exercise needs to be. And experts encourage you to rethink it, because an exercise intensity we don’t get enough of—and one that contributes greatly to health—is light physical activity. Movement that doesn’t make you sweat or have you trying to catch your breath, but does get you away from your desk or off the couch.

There are three kinds of physical activity: light, moderate and vigorous. It’s the latter two that we hear about the most, with the 24-Hour Movement Guidelines published by the Canadian Society for Exercise Physiology recommending at least 150 minutes of moderate to vigorous physical activity per week. “It’s at that particular intensity that we see the most immediate effects across a number of health domains. Not just physical or physiological, but also cognitive or mental health from an energy perspective,” says Leigh Vanderloo, scientific director at ParticipACTION, the Canadian non-profit that promotes physical activity. The boost of energy we get from that level of intensity in the middle of the day can help with with focus and fighting off that mid-afternoon lull in motivation.

Light physical activity, however—anything from washing the dishes to walking over to a colleague’s desk to stretching—also has important cumulative effects on health. “The more we’re moving, it really is benefitting us, especially if you’re thinking of it as a future investment into your golden years,” she says.

Too much time spent being sedentary can cause a spectrum of health issues: from insulin resistance, which can lead to an increase in the risk of Type 2 diabetes, to increased blood pressure to higher levels of anxiety. It can also affect your memory and productivity levels. “There’s a higher likelihood that you might be making more mistakes,” Vanderloo says.

While all types of physical activity decreased when the pandemic first hit, Vanderloo says moderate and vigorous activity has bounced back. Light movement, though, is still lagging. “[Prior to the pandemic], we automatically had more opportunities for this incidental movement—walking from the transit stop to the office or school, walking to meeting rooms and to the cafeteria from our desks,” she explains. Because many people are still working remotely, the opportunities for these bursts of activity are still lower than they once were.

You might have heard the phrase motion is lotion, and if you think about your body as a machine, excessive time being sedentary means that the body can rust. “If you don’t use it, you lose it,” says Ethan Yeung, a physiotherapist at Launch Rehab in New Westminster, B.C.

The typical recommendation for light physical activity is three hours a day, “sprinkled throughout the day,” Vanderloo explains. The number sounds overwhelming, but there are many ways to fit it in—some you’re likely already doing.

A common exercise Yeung gives to patients who are sedentary, or suffering from lower back pain, is plain old walking. “Five-minute walks, maybe two to three times a day to start,” he says. “When your tissue starts to warm up and move that makes things a lot more pliable. The joints tend to become looser and permit more motion to occur.” If you’re desk bound much of the day, set a timer on your phone every hour or so, and when it goes off, get up and stroll for five minutes, whether it’s around the office or your home.

Stretching also counts. “Yoga stretching can also be done seated,” Vanderloo notes. If much of your day is spent in front of a computer, Yeung suggests a scapular hold: “Imagine there’s a band attached to your chest, and then across the chest to the shoulders, and you’re trying to stretch that band across your chest.” Hold that pose for 10 seconds. For patients dealing with neck or mid back pain, he suggests doing 10 holds every hour when seated. “Ultimately it comes down to unloading muscles from being held in a position for too long. There’s a saying that your next posture is your best posture,” he says.

Vanderloo also recommends getting more light exercise via habit stacking—adding something new to something you already do so that the new habit is more likely to stick. Try standing while scrolling social media, pacing while on a work call, using a standing desk, getting off one bus stop earlier than you usually would or embracing housework as a method of increasing your daily minutes of light physical activity.

“There’s never a bad time to start,” she says.