Getting An IUD Inserted Can Really, Really Hurt. Here’s What You Can Do About It

Don’t let the pain factor prevent you from accessing the most effective form of birth control around. 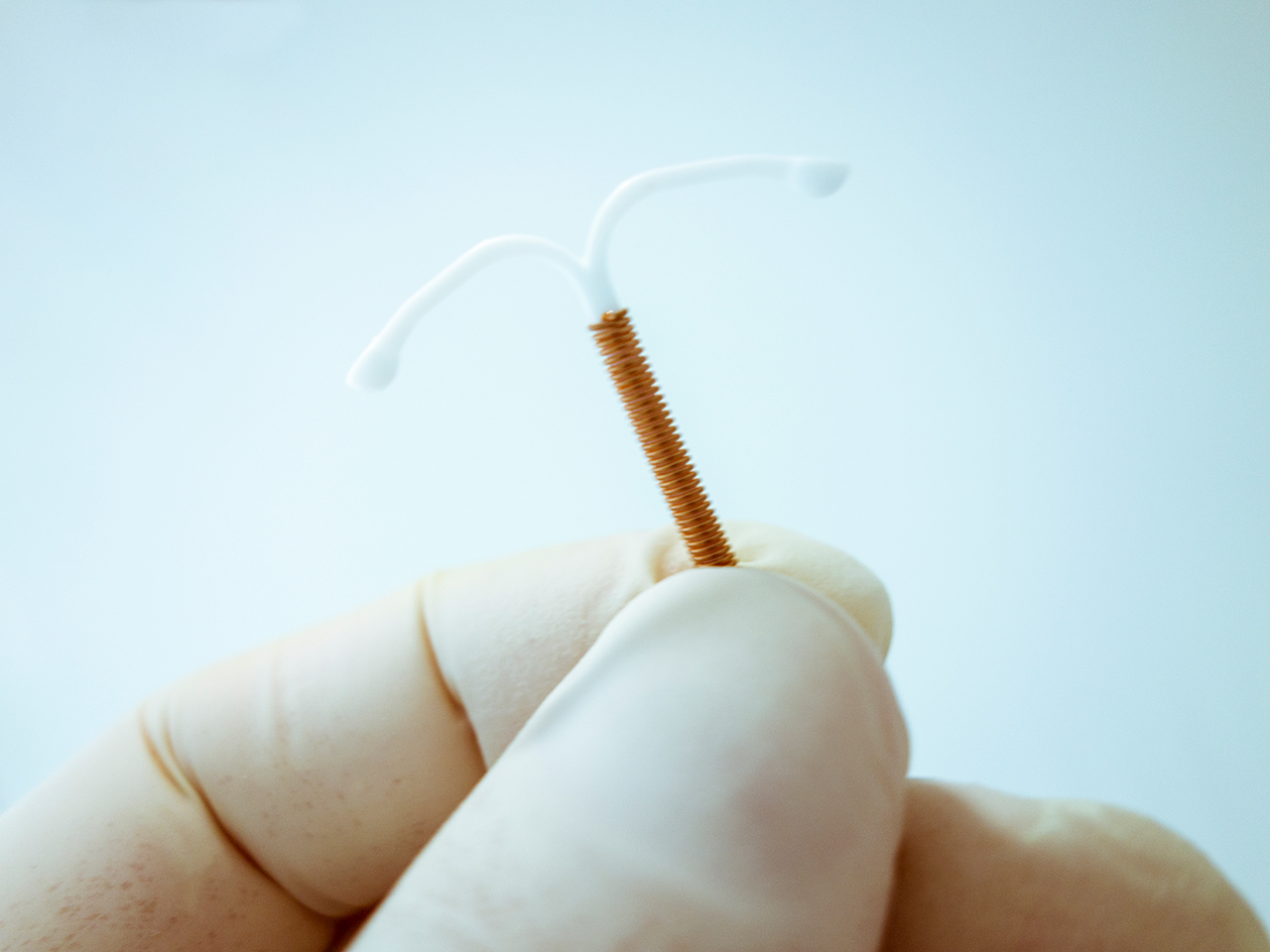 When I had my IUD replaced in January 2021, I considered myself a veteran. I’d had an IUD inserted twice before with no problems, so on this third visit, I knew what to expect. Everything was going as planned: I was calm, and the nurse was kind and super sex-positive (“no toys, penises or fingers for a few days,” she warned me).

But almost immediately after she began the procedure, the pain was immense, like I was being ripped apart. Shaking and swearing, I grabbed a light that was over the table—I needed to hold on to something to get through the pain. The nurse reassured me, telling me I was doing a great job. We didn’t stop, and the IUD was inserted within 10 minutes. But I still think about the pain.

IUDs are the most effective form of birth control, with a 99 percent efficacy rate. Many doctors say the devices should be more readily available to prevent teen pregnancy. And yet there are often no available options for pain management during the procedure, which can dissuade many from ever considering it.

It doesn’t have to be this way. Local anesthetics and topical freezing can help ease insertion pain—and it’s typically free in clinics that offer the service. If you know these options exist and you can find a clinic that offers them, you may get some relief.

Here’s what you should know about pain management and IUDs.

How do IUDs work?

A small piece of T-shaped plastic, IUDs (short for intrauterine device) are a form of long-term birth control inserted into the uterus by a doctor or nurse. The device typically works between five to 10 years, depending on the brand or type.

There are two types of IUDs available: hormonal or copper. Hormonal IUDs work by releasing a small amount of the synthetic hormone progestin to thin the lining of the uterus and thicken the mucus in the cervix, ultimately creating an environment that prevents fertilization. Copper IUDs have copper wire wrapped around them, like the name suggests, and release copper ions that are toxic to sperm, preventing pregnancy.

You can have an IUD inserted at either a healthcare clinic or your doctor’s office. Most women experience pain when the cervix is opened and stabilized, a step taken to help get the IUD in.

IUDs are considered the gold standard in birth control and are incredibly safe and effective despite past issues. In the 1970s, a popular brand of IUD called the Dalkon Shield caused serious health problems—from septic abortions to infertility and even death in some cases for women in more 80 countries. Eighteen women died in the United States, and 100,000 women were named as claimants in a case against the manufacturer. After a lawsuit against the manufacturer, the device was discontinued in the 1980s, and IUDs became extremely unpopular in North America.

But the issue was with the design of the specific Dalkon Shield device, not IUDs in general. While they remained unpopular in North America until the 2000s, copper and hormonal IUDs continued to be prescribed and refined in other countries to great success. Now, a new generation has come of age and is more willing to try the device. Recent restrictions to access for abortion and other sexual health care has also driven more young people to seek out IUDs.

Is getting an IUD painful?

According to two Canadian gynecologists interviewed for this article, IUD insertions are typically well tolerated and, at most, uncomfortable. But recently, there has been a spate of first-person accounts on both social media and in news outlets detailing traumatizing and torturous insertions. A petition originating in the U.K. and signed by nearly 35,000 people has also begun circulating, demanding access to pain management during the procedure. Nearly half of petition respondents indicated their pain was seven out of 10 or higher during IUD insertion, describing the experience as “worse than broken bones.”

IUD insertions are ultimately unique for every individual and depend on a host of factors, including stress and anxiety. “There are no standards for pain management” during IUD insertion, says Dr. Amanda Black, professor of obstetrics and gynecology at the University of Ottawa. “The experience is very variable and depends on the patient. Because of this, there is no standard for pain management—just the common practice of recommending two Tylenols before the procedure.”

If you’re in pain during insertion, you can ask your provider to stop and try it again another day. Black recommends that if the patient or the provider finds the procedure too challenging, they should seek a referral with a provider specialized in difficult IUD insertions.

What options are available to manage pain during IUD insertion?

In Canada, there are a few options that can reduce the pain of insertion. One is a local anesthetic, which can either be applied as a spray or by needle to the cervix, though this is not always useful. “Local anesthetic is not routinely used during IUD insertion as it doesn’t necessarily help to alleviate the uterine cramping that can occur [after insertion],” Black explains, though it can help reduce pain during the procedure.

If you’re interested in local anesthetic, you’ll need to ask for it in advance. “Using local anesthetic can be arranged, but this should be discussed ahead of time to ensure that it is available at the time of the procedure,” says Dr. Amanda Selk, obstetrician and gynecologist at Toronto’s Mount Sinai Hospital.

Local freezing (applied with a spray or needle to numb the area), IV sedation and general anesthetic (both of which require putting the patient to into a medicated sleep with the help of an anesthesiologist to monitor breathing) are three other tools that the gynecologists recommend, each with its own challenges and requirements. But even the simplest options like local freezing—the equivalent of which is done at the dentist’s office when you get a filling—are not always available at clinics. When I searched for these options at clinics in the Toronto area, I couldn’t find a single clinic offering them.

Why is it so difficult to find clinics that offer pain management for IUDs?

The gynecologists I spoke with discussed pain management as an unusual and uncommon option for IUD insertion. And in my limited personal experience, I never had pain management offered. Through my own research, I could only find six clinics that provide pain relief, mainly in British Columbia.

On the east coast, Abbey Ferguson was shocked to hear other clinics don’t readily offer pain management options for IUD insertions. As the executive director of the Halifax Sexual Health Centre, she says that “the vast majority [of insertions] uses the xylocaine option at our clinic.”

Xylocaine is a local anesthetic and cervical block, “very similar to what you experience at the dentist,” says Ferguson. The drug can either be administered as a topical spray or as an injection of lidocaine into the cervix. Dr. Hali Bauld, medical director of the Halifax Sexual Health Centre, explained that both options are acceptable strategies for pain management. At the Halifax Sexual Health Centre, each patient must have a pre-insertion consult, at which point pain management options are discussed. If patients are especially anxious, an anti-anxiety med can also be prescribed.

“Physicians have the right to practise in different ways, but generally speaking, we should follow evidence, and evidence is currently recommending low-dose xylocaine or none at all,” Ferguson says. “So it just surprises me that folks would choose not to do it. It’s not a cost factor for us as a clinic.”

The lack of pain management may, in part, be due to a failure to legitimize women’s pain. A 2018 meta-analysis on the gender pain gap across Europe and the United States revealed that women’s pain is more likely to be described as “hysterical” or “sensitive.” Indeed, there’s a long history of women, especially racialized women, being dismissed at hospitals or by their physicians. This leads to real world consequences: A British study showed that women who went to the hospital with heart attack symptoms were 50 percent more likely to be misdiagnosed than their male counterparts.

How can Canada improve its access to pain management?

Canadian clinics don’t advertise their services the same way clinics in the United States do. Therefore, it’s difficult to say precisely how many providers offer pain management for IUD insertion.

Bauld thinks that a multitude of options should be on offer to ensure adequate pain management. “Offering a combination of pain management options (including pre-insertion NSAIDs and intrainsertional lidocaine anesthetic) in combination with non-pharmacological measures [such as distraction, or having a friend or family member present for the procedure] helps to improve patient’s experience of pain and anxiety with intrauterine device insertion procedures,” she says. “There is research-based evidence available to support the use of these techniques.”

If medical professionals want more individuals to use effective birth control options such as IUDs, options to make the procedure less intimidating and more accessible should be widely available. As Black acknowledges, “Health care providers should listen to their patients and know when to refer on for challenging cases.”

Now that I experienced so much pain during my insertion, I’m afraid to have my IUD removed in a few years. Knowing there’s a world of easy and affordable options that could have diminished my suffering angers and frustrates me. I don’t want other women to have to experience what I did, or worse, reject an effective and low-maintenance form of birth control solely because their provider doesn’t offer pain relief.

A previous version of this story incorrectly listed Tylenol as an NSAID. The story has been updated.