How to decode hospital slang 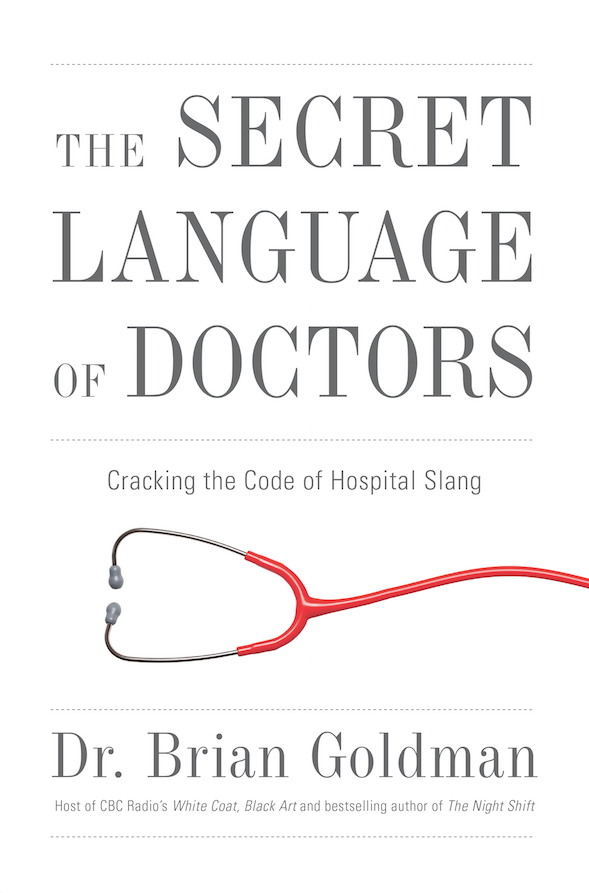 The following is an exclusive excerpt from Dr. Brian Goldman’s latest book, The Secret Language of Doctors.

“Brian, do you mind coming over to the resuscitation room for a minute?” a nurse working in my hospital asked me. I told her I’d come over as soon as I finished with a couple of patients in the ambulatory care room where we see cuts and sprains.

It was nearly 3 in the morning and I was tired. I’d done my time taking care of patients in the Resuscitation Room. If there’s one thing ER physicians hate, it’s getting pulled back into a job, a patient or an assignment you thought you were over and done with for your shift.

But I already knew that it was going to be different this time. Two hours before the nurse asked me to come back to Resus, paramedics had brought in an impossibly young Asian man who had suffered cardiac arrest while working the night shift in a factory . He had been complaining of pain in his upper abdomen and lower chest for a day or two, but passed it off as indigestion. During a meal break, he called his mother to say he wasn’t feeling well. Half an hour later, he collapsed.

The paramedics wheeled him into the first bay in the Resuscitation Room in full cardiac arrest. One was doing CPR, a second was manually ventilating the man using a bag valve mask device. A third medic gave us report.

“Approximately 30-year-old man collapsed while on duty at work,” the paramedic told us in a rat-a-tat staccato. “Found in full cardiac arrest. CPR started at scene. V-fib on the monitor, shocked times four, given Epi times three, plus Vasopressin. Went into asystole and has been that way for 20 minutes.”

Asystole means the heart was showing no electrical activity. A flat line for 20 minutes — added to the time that he was in ventricular fibrillation — meant the man was essentially unsalvageable.

Those were the cold, hard facts. But he looked far too young for this to be happening to him. You never want to stop trying to save a patient like that.

“I don’t think there’s any point in continuing,” said my colleague. “I’m calling it.”

Calling it is slang for stopping resuscitation efforts and pronouncing the patient dead.

I went back to the AC room, where a growing horde of minor problems awaited me. But I kept thinking about the man who had just died, and how his family would react to hearing the news.

About an hour later, I glanced up from the desk in AC to see a short, Asian woman in her mid-50s walk past. She was accompanied by two police officers. I knew right away that she was the dead man’s mother.

I decided to follow them as they made a sharp right turn and headed down a long hallway, past the main nursing station, until they reached the fourth bay in the Resus — the only bay with its own sliding door. Built to prevent infected patients from spreading germs, it also allows a private space for family members to see their dead loved one and to grieve.

As the woman and the two police officers approached the entranceway to Resus 4, I spotted my colleague who had called the death. Breaking bad news is the most difficult thing we do in the ER. I asked my colleague if he wanted me there when he talked to the mother. As I expected, he brushed me off. There’s a code among doctors in the ER: if it’s your patient, it’s your duty to tell the next of kin.

I backed away as my colleague introduced himself to the woman and escorted her into a room at the far end of the resuscitation stretchers. I lingered for a second as the woman disappeared into the room. The instant the door to the room slid shut, the screams began.

By the time the nurse asked me to look in on the woman, an hour had passed since my colleague had broken the news that her son was dead.

I approached the door to the resuscitation room, where the nurse was waiting for me.

“We were hoping you could talk to her,” said the nurse. “We’ve tried comforting her. She won’t leave the bedside. It’s like we can’t reach her. We don’t know what to do.”

The room was dark as I walked in. The dead man was lying face up on the gurney, his eyes wide open. To the left of him stood his mother, flanked by two nurses who were holding her and trying in vain to soothe her. The woman was shaking her son’s lifeless body and shouting at him to wake up, as if he were asleep.

That the woman could not get past this moment and face the future was totally understandable. I kept what I hoped was a stoic yet kind look on my face as I made my way slowly towards her.

Truth is, I was stalling. I had no idea what — if anything — I could do to help her.

This was almost certainly the woman’s first time seeing death up close. As a 30-year veteran of the ER, I have seen it many times. Some patients — like the Asian man — arrive in full cardiac arrest the first time I set eyes upon them. Others die on my watch.

Despite my long experience, I always feel as if I’m rather inept at helping families deal with all things death. I’m not alone. As a profession, we find it difficult to talk to patients near the end of life about taking a pass on heroic measures. Telling next of kin about an unexpected death is the most difficult experience because you have to stay there and absorb that raw moment when they’re processing the reality of what has happened. There is no training in med school or residency that prepares you for that.

Excerpt from The Secret Language of Doctors by Dr. Brian Goldman © 2014. Published by HarperCollins Canada. All rights reserved.