How nature can benefit your health and happiness

Nature has a huge impact on awareness, mood and immunity. Here's why you should be reconnecting with the natural environment 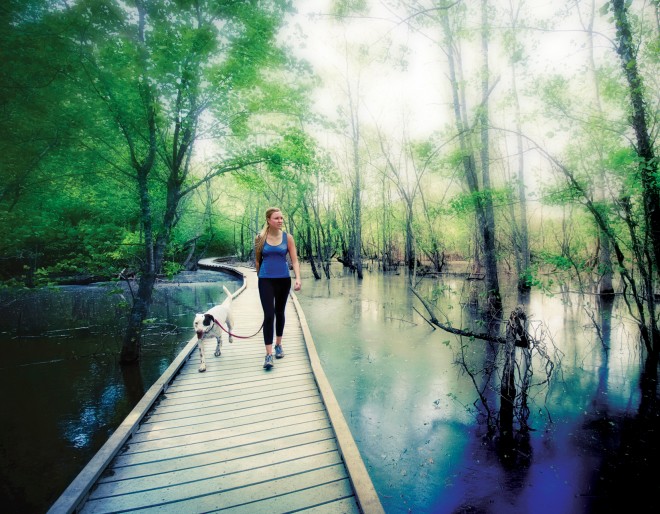 Magda Goemans was having a lousy day. She’d been up with her 16-month-old daughter most of the night, and her energy and patience were at an all time low. So when her husband came home that night, the 41-year-old mother of two did what she often does when she’s feeling out of sorts: She went for a run along the river near her Ottawa home. “I just love the freshness and calm of the water, the sound of the birds and being under a canopy of leaves,” she says.

Her emotional coffers replenished, she went home. “I always notice a huge difference in my energy level and mood when I get back. It’s just so refreshing to be on that trail. I forget I’m in a city.”

Magda tapped into a primordial impulse—one that is now supported by modern science but has its roots in ancient healing. Both traditional Chinese medicine and Ayurveda (an ancient approach to wellness that originated in India) “have long advocated interaction with nature as a form of medicine,” says New York-based naturopathic doctor Alan Logan, co-author (with Dr. Eva Selhub, an internal medicine physician) of Your Brain on Nature: The Science of Nature’s Influence on Your Health, Happiness and Vitality. Just how does nature help? Proponents believe the energy from mountains, trees, plants and water can improve your sleep and mental outlook.

While modern Western medicine for conditions like mild depression leans toward drugs, new peer-reviewed studies from around the globe and MRIs affirm nature’s positive impact on the brain, mood and other aspects of health. That may reverse the tide of ignoring the natural, says Logan. “We don’t need to abandon the urban environment, but, rather to connect to what nature can do for us in an increasingly urban world,” he says. “What would we gain by taking nature into account? It runs the gamut from increasing creativity and cognitive refreshment to fighting cancer.”

In Japan, where a lot of nature-brain research is conducted, they coined the phrase shinrin-yoku, which means “forest bathing.” In the 1990s, Japanese scientists sent study subjects into the nation’s ancient forests. They found that a 40-minute stroll lowered cortisol levels, improved sleep and reduced psychological stress and symptoms of depression. Subsequent tests on countless people worldwide support their findings.

These results are no surprise to Elizabeth Nisbet, a researcher in the psychology department at Ottawa’s Carleton University. She studies nature relatedness—the degree to which an individual is connected to the natural environment—and its relationship to happiness and mood. “People who can say they’re connected to nature report having more energy, feeling happier and enjoying a greater sense of purpose and meaning in their lives. They also behave in more environmentally sustainable ways,” she says. So what’s happening in your body when you traipse through the forest, hang out by the river or go for a stroll in the park?

In today’s fast-paced, frenetic world, our brains must work extra hard to stay on task. But in a study published in American Scientist, MRIs showed that the brain simply doesn’t have to make as much effort in a natural environment. Not only that, but images of desirable outdoor scenes are also shown to ignite the brain’s opioid receptors—and trigger happy feelings.

Activated opioid receptors may also be linked to reduced stress perception, increased ability to make emotional bonds and a lower tendency to dwell on bad memories. “Nature is like a little drop of morphine for the brain,” says Logan. He believes this will have a huge impact on how mental illness is treated, since opioid receptors tend to be less active in these individuals. It’s also why we’re going to start seeing a lot more “ecotherapy” to treat depression and anxiety.

Literally taking in the lush scents of natural surroundings—lake air, flowers, fresh dirt, dewy grass—jump-starts the body’s limbic system, a.k.a. the brain’s key emotional centre. It regulates the fight-or-flight response and is involved in the expression of emotions and memory formation and retrieval.

When you breathe air close to nature, you’re also more likely to inhale phytoncides, essential oils released from plants and trees, such as oak and pine, that promote the function of natural killer cells in the body (which are key to the immune system) and are being studied as a cancer treatment. Japanese researchers found that increased killer cell activity lasted for up to seven days after a trip to a forested area. The potential of this is vast, says Logan, who suggests that it’s not far-fetched to prescribe, say, a nature getaway as part of a regular course of treatment for cancer.

Thanks to nature’s rejuvenating properties, the brain has an opportunity to stop and think, says Logan. In a study published in Psychological Science, researchers sent mentally exhausted, but otherwise healthy, adults on a walk; one group in a green setting, the other in a city. Cognitive tests upon their return showed those on the nature break had a marked boost in their ability to focus, retain information and solve problems. “It’s important to recharge mentally,” says Logan. And nature offers this opportunity.

There’s a certain irony that all this information is coming at a time when we’re more disconnected from nature than ever. Leisure time used to mean outdoor activities, but more people are now hiding out inside, playing video games or using Twitter, Pinterest or the latest app. Even when we’re outside, our attention is often diverted by that gadget in our pocket.

“A world of distraction is not without cost to mental energy,” says Alan Logan. “It takes a huge amount of effort to stay on task in the modern digital world. There’s an entire network of brain activity that’s dedicated exclusively to putting on the brakes, so we can stay focused.”

And that distraction can erode the nature-brain connection. “Mindfulness, the awareness of being here and now, being in the moment, is ultimately the bridge between nature and its health benefits,” says Logan. “So if you go to a park, are you really getting the same health benefits if you don’t unplug from your smartphone or keep checking up on Twitter?”

The good news is that it isn’t an either-or proposition. Nature actually helps us deal with stresses from constant connectedness, says Logan. The take-away? When you’re overwhelmed, and your boss is breathing down your neck to finish that report, the answer is not to keep plugging away but to take a 20-minute walk. In all likelihood, you’ll get it done just as fast and probably better.

For more insights on the connection between mood and nature, check out Your Brain on Nature: The Science of Nature’s Influence on Your Health, Happiness and Vitality.