5 Exercises You Can Do While Watching TV

Add some movement to your day without interrupting your Netflix binge session. 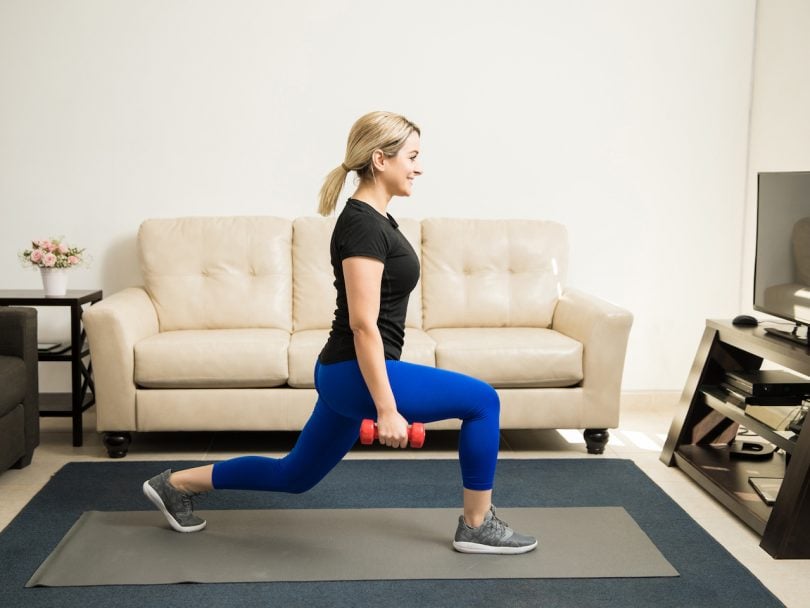 Getting outside to exercise is more of a challenge now, but you can still add movement to your day, even indoors—like during your nightly Netflix session. Using your couch as a prop, you can work the muscles in your arms, chest, shoulders, legs, back and abs.

There are big benefits to keeping active throughout the day. You’re increasing your heart rate, working your muscles, and moving your body. Sitting all day isn’t good for us—at the very least, it causes stiffness and discomfort. “Movement is medicine, so the more we can move, the more we can prevent injuries and future disease processes,” says Oriana Catenazzi, a Toronto-based physiotherapist.

Here, we share five exercises to get you moving—and caught up on your favourite show.

To avoid having to count reps, set a timer on your phone and do continuous repetitions of one movement until it rings. Catenazzi suggests starting with a shorter time (approximately 30 seconds), then working your way up to 45 seconds or even one or two minutes. When the buzzer goes, set up for your next exercise and restart the timer. If you want more of a challenge, try doing reps of the same movement until you’re fatigued, and then switching to the next exercise. Either way, you’re creating a circuit of movements that you can repeat as many times as you’d like. (Also, Catenazzi emphasizes double checking your couch ends are strong enough to support you before starting out.)

How: Find a comfortable position for your feet and knees, hip-width or wider. Keeping your heels on the ground and your spine tall, squat down and tap the seat of the couch with your bum. “That way, you’re using the couch as a feedback tool to know how deep you are,” Catenazzi says. Move your arms forward and parallel to the ground as you squat. Try to squeeze your bum (glutes) as you straighten your legs.
What it works: Legs and glutes
Added challenge: Interlace your hands behind your head and keep your elbows wide as you squat. This will activate the muscles in your core and create upper back extension (great for all of you desk-sitters). You can also try a hovering position above the couch seat.

How: Sit at the very edge of your couch seat with your arms crossed over your chest. Lift one knee as high as possible, alternating between the left and the right. Try not to twist, tilt, shift or bend your torso. You should only lift your knee, leg and foot. “This is a slow, controlled movement,” Catenazzi says.
What it works: Core, back, postural stabilizers and hip flexors
Added challenge: Hold your knee up and hover your foot in a static hold. Try the exercise while standing to work on your balance.

How: Stand facing the arm of the couch and place your hands about shoulder width or a bit wider. Slowly step back into a long inclined plank position, so your body is one strong line. Bend at the elbows and lower your chest toward the armrest, then push back up. If your chest meets the couch but you have trouble pushing back up, try lowering a little less. The biggest benefit is in the pushing-up part.
What it works: Chest, arms and core
Added challenge: Lower the angle of your body by using the edge of the couch seat. Alternatively, try the movement on the floor with your knees on the ground or in a full plank. To focus on triceps in any variation, keep your elbows tucked in to your sides.

How: From the same plank position on the armrest as described above, lift one hand, cross it in front of you and tap the opposite shoulder as you keep your body stable. Just as with the knee lifts, try to avoid tilting, shifting, bending or twisting your body. Only your hand and arm should move.
What it works: Core and shoulder stability
Added challenge: As with the armrest push-up, you can lower the angle of your body by using the edge of the couch seat. Alternatively, try it on the floor with your knees on the ground or in full plank.

How: Stand with your feet parallel, about hip-width, with hands resting on your hips. Step back with one foot into a staggered stance. Lower the knee of your back leg towards the ground, keeping your hips, knees and toes pointed forward and your spine tall. To avoid slamming your knee into the ground, put a cushion on the floor and try to lightly tap your the knee of your back leg on the cushion. Use the strength of your legs to rise up to your staggered stance. Repeat the split squat movement on one side, then switch.
What it works: Leg strength and stability
Added challenge: Try this exercise with the foot of your back leg elevated on the couch seat behind you, and lower your knee over the edge of the couch to try to tap the cushion. Repeat a few times on one leg, then switch. “This version will really challenge your balance and stability,” Catenazzi says. For either variation, hold and hover for a few seconds.

Modify these exercises as you need to keep up your interest and motivation. For example, instead of doing squats, try standing and sitting ten times. You could also lessen the time spent on each exercise or choose only two to three movements. “It’s not rocket science,” Catenazzi says. “A little is better than nothing, because it’s about building the habit.” A movement may require getting used to, but there should be no acute, sharp or localized pain. If you have injuries or concerns, Catenazzi suggests seeking the advice of a medical professional.

The goal is to develop body awareness through movement. The more you move, the more you get to know what your body likes and needs if you’re feeling stiff or sore from lack of movement or prolonged postures. “Instead of just accepting aches and pains, you can break that cycle and learn what feels beneficial and good for your body,” Catenazzi says. “And if you break that cycle while watching Netflix, you can break it anywhere else.”