Get The Ultimate Core Workout With These 3 Simple Tools

Make exercises for your midsection really count by adding a new piece of equipment. 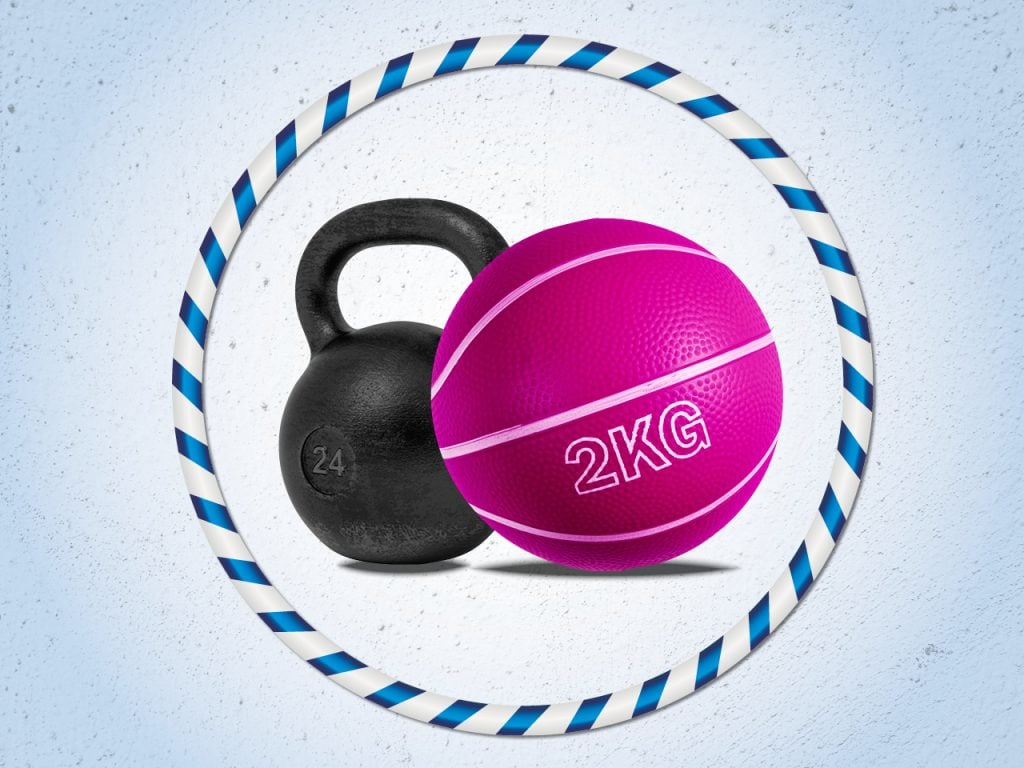 Classic bodyweight exercises aren’t the only way to whip your core into shape. Whether you’re looking to mix up your ab workout or take it to the next level, introducing a piece of equipment might be just what you need for your next home workout. We asked Kim Lavender, VP of team and small group training at GoodLife Fitness, for her take on three must-try tools for the ultimate core workout.

These aren’t exactly the same as the colourful plastic toys from your schoolyard days, but the basic concept is the same. You’re trying to keep the hoop turning, which isn’t as simple as it looks (or in all likelihood as easy as you remember). The hoops used in conditioning classes are weighted, which makes them easier to keep in motion and a better workout for your abs.

Skill level required: Suitable for beginner to advanced workouts. Hoops come in different weights, between 2 and 5 pounds. Start with the lightest if you’re new to hula hooping.

Signature moves: In addition to traditional hula hooping, you can lay the hoop on the floor and do walking planks through the hoop (start in a traditional plank, then slowly walk your hands forward as far as you can, keeping your hips level, then back again). Or, treat it like a bigger version of a Pilates ring (a tool used in different ways for upper and lower body conditioning). Lavender suggests trying this: Hold the hoop in both hands, with arms extended. “You use the strength of the chest to keep the hoop there, then thoracic spine mobility, turning the body above the belly button,” says Lavender. “There’s a ton of creative ways to use this one piece of equipment.”

“Medicine balls are one of my favourite tools for core workouts,” says Lavender. They’re versatile and are a staple in CrossFit and bootcamp classes because they lend themselves so easily to the so-called “primal moves” those workouts draw on (think exercises involving squats, lunges and deadlifts).

Skill level required: Suitable for beginner to advanced workouts. Balls come in a range of weights from as little as 1 pound to as heavy as 50, making them adaptable to different moves and strength levels.

Signature moves: Medicine balls can be used stationary — for instance, you can try resting it under one hand while doing a plank to increase the level of difficulty, or you can hold it against your chest while performing weighted lunges. “You’re getting the most benefit for your midsection when the ball is in motion, though,” says Lavender. A squat wall ball toss is a classic move in bootcamp and HIIT workouts. (These are done by standing about three feet from a wall, holding the medicine ball at your chest. You descend into a squat, then as you drive through your heels to push upwards you extend your arms, throwing the ball overhead against the wall. Catch and repeat.)

Thanks to the bell shape, a kettlebell’s weight is unevenly distributed, which is great news for your core, because no matter which moves you’re doing, your stabilizer muscles are working extra hard.

Skill level required: Most suitable for mid-level to advanced workouts. “If you’re going to engage in kettlebell swings or ‘clean and press,’ a move where you draw it up the body and overhead, those should be coached properly before attempting,” says Lavender. Injuries, especially to the lower back, are not uncommon for people who are new to kettlebell exercises. Kettlebells come in a range of weights, from as little as 9 to over 100 pounds.

Signature moves: Kettlebell workouts are known for their swing moves, which are killer core conditioning, but there are other ways to use this piece of equipment. It’s a great accompaniment to a deep squat, says Lavender. “You can use it to counterbalance and help you keep a natural spine to create depth in the squat.” Because it has a handle, kettlebells can also be used as traditional dumbbells, making them versatile for full-body core workouts and beyond.