Fiddleheads are a great source of vitamins A and C -- eat them while you can!

Fiddleheads are in season, but not for long. These popular veggies only appear in markets for a few weeks every spring, so get them now before it's too late. 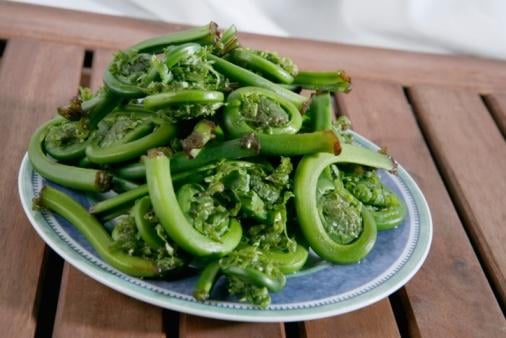 One true sign of spring is when the fronds of the ostrich fern show their heads in April. Appropriately called a fiddlehead (the spiral shape resembles the head of a fiddle), this green vegetable is a nutritional wonder.

I had the honour of judging the So You Think You Can Cook competition on April 11, and all of the chefs had to use fiddleheads as their featured ingredient. What a perfect local choice, because its exotic status stems from its brief appearance each spring.

Andrea Mlinarevic from Norcliff Farms says it perfectly: “Fiddleheads grow so quickly that they must be picked the day after they sprout; otherwise they will blossom into beautiful ferns. Fiddleheads grow wild across Canada, but most abundantly along the east coast. These little gems are so vigorous, especially after a warm rain in May, that they can grow up to six inches overnight.”

Foragers hunt them for such a short season because the moment the plant matures and the fronds unfurl, they become tough and less edible. If you want to pick fiddleheads from the wild, take a foraging course with an experienced plant expert because other ferns can be poisonous.

If hunting in the forest for your food is not in your future, you can enjoy fresh or frozen fiddleheads in many stores across Canada, or preserved fiddleheads from www.wildfoods.ca. When you buy them at the market, look for bright green specimens that are tightly packed and have no brown spots. They can keep for up to two weeks in the fridge. With fiddlehead season only lasting from the end of April to mid-June, these spring veggies fly off the shelf almost as fast as they grow. Good thing too, as they are a good source of vitamins A and C and fibre.

2. Fiddleheads are the ultimate antioxidant food: Fiddleheads have been shown to have up to twice the antioxidant capacity of blueberries! These antioxidants have the ability to boost levels of glutathione (a powerful antioxidant) and ramp up your body’s innate immune system by bolstering its own natural defences and warding off invading pathogens.

3. Fiddleheads are anti-inflammatory: The combination of powerful antioxidants paired with the heavy dose of omega 3 fats helps to modulate the body’s inflammation pathway. These two benefits of fiddleheads also work together to prevent our immune system from attacking cells that are our own, as in autoimmune diseases.

4. Fiddleheads are a great source of weight-balancing fibre: Half of a cup of fiddleheads contain 7g of dietary fibre. The fibre in fiddleheads is great for anyone suffering from Irritable Bowel Syndrome (IBS) because they have to be well cooked before eating. This makes fiddleheads soothing and easily digested with no discomfort, while healing the digestive tract. 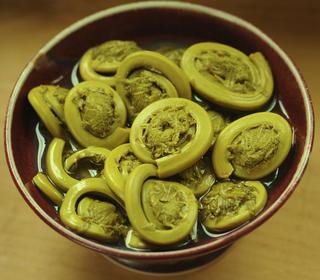 Pearl barley risotto with fiddleheads, squash and walnuts
This is a recipe by Chef Kyle Christofferson, winner of the 2011 So You Think You Can Cook fiddlehead competition.

Nutritionist Julie Daniluk hosts Healthy Gourmet, a reality cooking show that looks at the ongoing battle between taste and nutrition. Her soon-to-be-published first book, Meals That Heal Inflammation, advises on allergy-free foods that both taste great and assist the body in the healing process.