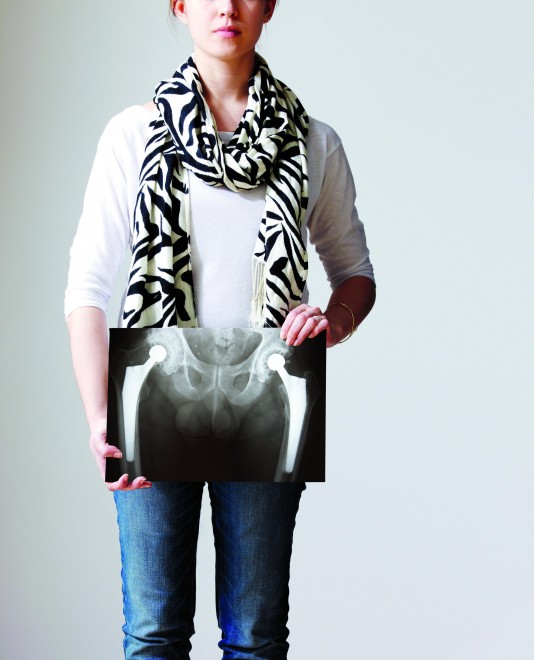 On February 2, 2010, I woke up in more pain than I’d ever experienced. The day before, surgeons had replaced both my hips with ceramic prosthetics. Sure, the surgery is pretty normal if you’re 65, but I was 22. And no, I hadn’t suffered a fall or been in an accident. I had my hips replaced because I suffer from osteoarthritis. For six years, I’d endured a constant dull ache and severe stiffness in my hips. It kept me awake at night, and by the time I was 20, I needed a cane to walk.

Like hip replacements, arthritis is common: Four million Canadians are affected by it, and that number is growing, especially among young people. Sixty-four percent of arthritis sufferers are women, and more than 900,000 are under the age of 50.

There are more than 100 different types of arthritis. The kind I have is due to a rare genetic disorder, multiple epiphyseal dysplasia, which causes irregular bone and cartilage development and eventually leads to osteoarthritis, one of the most common types. With the disease, the cartilage between your joints wears away gradually until your bones rub against each other. Another common cause of arthritis is an injury that damages bone or cartilage. Jill Jenkins* from Whitby, Ont., developed osteoarthritis in one knee after falling in the playground when she was six. By the time she was 16, Jill had to abandon most sports because she couldn’t handle the pain. Now 38, she has to limit her exercise to walking and swimming.

Coping with the pain
Arthritis at any age affects your quality of life. Constant discomfort and stiffness can lead to fatigue, sleep disorders, depression and mobility issues. A study by Ontario’s Institute for Clinical Evaluative Sciences found that women are almost 20 percent more likely to experience disability from arthritis than men. And in addition to the physical struggle, there’s the emotional issue of social acceptance, especially for
those afflicted at an early age.

“Many people believe arthritis is an old person’s disease — they aren’t aware that it also affects younger people,” says Gillian Hawker, physician-in-chief at Toronto’s Women’s College Hospital. “But it doesn’t matter how old you are; living with chronic pain is a horrible thing.”

Jill believes she lost her job because she couldn’t make it into work after a fall. “They came up with another reason to fire me later, of course,” she says. After that fall, she developed osteoarthritis in her other knee and had to use a walker. “My boss kept asking me, ‘When are you going to get rid of that thing?’”

Melissa Parent is fortunate that her co-workers are more supportive. The 27-year-old works at a bank in Courtice, Ont., despite having suffered from juvenile rheumatoid arthritis since age 10. (Juvenile rheumatoid arthritis affects one in 1,000 children in Canada, and the cause is unknown.) One day, Melissa simply woke to find her knees had swollen to the size of soccer balls. As she grew, her arthritis spread from her ankles to her collarbone.

Although Melissa has been able to continue working, a normal social life has been hard to maintain. “I can’t go to the gym with friends, walk around the mall or go out dancing,” she says.

I can relate. For years, I struggled to explain the pain to friends. They couldn’t understand why walking three blocks to a party or standing on the dance floor for 15 minutes was such an ordeal. Rather than trying to explain my condition, I’d make myself stay out a little longer than I should have, which often meant staying in bed the next day to recover.

Managing Expectations
There is no cure for arthritis. And when it comes to treatment, medication is typically the first approach. Doctors often prescribe anti-inflammatory drugs to relieve stiffness and painkillers to take the
edge off . In my case, nothing took the pain away completely. I tried naproxen and Tylenol 3 first. When the naproxen began to wreak havoc on my digestive system (a common side effect), I stopped taking it daily and used it only when the stiffness was unbearable. After a few years, Tylenol 3 no longer had any effect and I had to switch to Percocet.

X-rays revealed the damage in my joints was progressing quickly. When I was in my second year of university, James Waddell, an orthopedic surgeon at St. Michael’s Hospital in Toronto, suggested hip replacements. But I wanted to finish school first because I was worried about falling behind, so we waited.

Things only got worse. The pain and stiffness became so severe that I needed two canes to get around, and I couldn’t walk more than a block without having to stop and sit down. One night, I tried to walk home after missing the bus and ended up crying on the curb. By the time I graduated, I was ready to go ahead with the surgery, despite the risks of blood clots and infection and the knowledge that I’d likely have a lengthy recovery ahead of me.

As it turns out, joint-replacement surgery among young adults is rising. “Young people are less willing to put up with the pain,” says Waddell, who estimates that a third of his patients are under the age of 50.

But sometimes it’s hard for young arthritis sufferers to convince doctors that surgery is the best option. By the time Melissa was 16, the pain in her hip was unbearable and, when medication didn’t help, she begged for surgery. But she was so young that doctors were reluctant to operate. Aside from the physical challenges of recovery, she’d have to take time off school and would also likely need a second surgery, called a revision, because replacements last only 10 to 30 years before they wear out.

“Over the next three years, I saw many doctors who refused to do the operation,” says Melissa. “I thought, ‘I can’t live like this anymore.’ There was an inch difference in my legs, and it made me waddle. And I had no movement in the joint whatsoever — it was completely fused.” Finally, at 19, she found a physician who agreed with her that surgery was a must.

Part of the problem, Hawker says, is that while doctors often ask patients to rate their pain on a scale of one to 10, that’s not usually enough to get a clear picture of the physical and emotional toll arthritis can take. “Your doctor can’t feel your pain or tell you how it affects your quality of life,” she says. “You have to be an advocate for yourself and speak out. Discuss your functional limitations and figure out together what treatment is best.”

For me, surgery has made a huge difference in how I cope with my arthritis, and it has definitely changed my life for the better. It’s now been a year and a half since I received my new hips, and I’ve finally been able to stop taking pain medication altogether. My posture has improved significantly, I haven’t used a cane for months and I can walk from the subway to work without any problems. I also sleep better at night and can even go out dancing with my girlfriends now and then.

Although I know that I’ll probably need revision surgery in about 20 or 30 years, when I wake up in the morning I still believe I made the right decision. Without arthritis holding me back, there’s nothing to stop me from living my life the way I want to live it.

How to reduce your risk
Some arthritis risk factors, such as aging and family history, can’t be avoided. And if we live long enough, most of us will get it. But there are things you can do to lower your likelihood:

Eat healthy: Being overweight or obese is a major risk factor for developing arthritis. For those who already have the condition, maintaining a healthy weight means less pressure on the lower extremities and less pain in the hips, knees and feet. When it comes to your diet, add more calcium (vital for the prevention of osteoporosis) and vitamin D, which helps your body absorb calcium and may even slow the progression of arthritis.

Stay in shape: Physical activity keeps your muscles healthy, reducing your risk of joint pain and stiffness and increasing your flexibility. If vigorous exercise causes discomfort, consider light activities, such as swimming, and consult a physical therapist to set up an appropriate routine.

Wear supportive shoes: Proper footwear can improve your posture and reduce pressure on your joints, even if you already struggle with arthritic pain. Look for shock-absorbing running or walking shoes that provide arch support, heel protection and plenty of room for your toes.

Could you suffer from arthritis and not know it?
If constant pain interferes with your daily routine, it may be more than just the natural aging process. Here are four symptoms you shouldn’t ignore:

1. Discomfort in your hips, knees or elbows
“If you normally walk five or six blocks to work and notice that you’re beginning to develop pain in your joints, it could be a sign of arthritis,” says James Waddell, a Toronto-based orthopedic surgeon. Another sign that something may be amiss is that the pain stays with you most of the day and causes discomfort when you try to sleep at night.

2. Stiff joints
Pay attention to this, particularly if it happens after you rest or when you wake up, or if your joints make a creaking sound when you move.

3. Swelling or redness around your joints
This may occur along with a reduction in strength.

4. Decreased flexibility
Take note of any extreme decreases in range of motion or flexibility imbalances between sides.