I swear that every cake will be my last—but the sweet reward keeps me coming back. 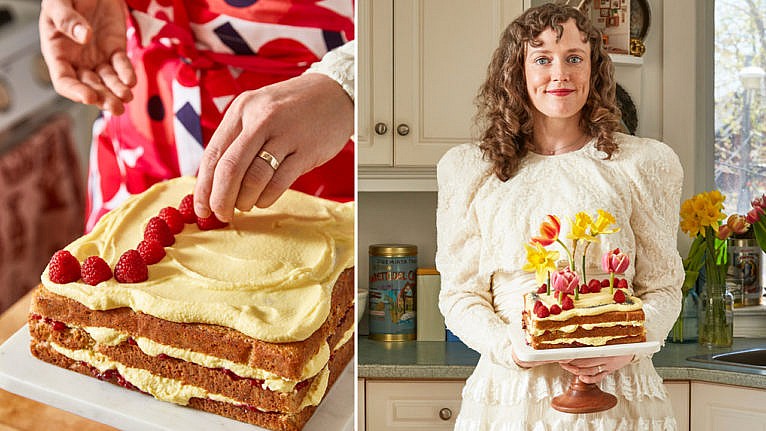 As we cruise down the highway at top speed, windows down and Rolling Stones blasting from the radio, I wish I’d waited to rub the fondant-covered wedding cake with Crisco—a baker’s trick for adding shine, but also sticky—until we got to the venue. My friend Maggie and I are balancing three tiers of cake on our laps, crammed into the front seat of a lime-green pickup driven by her dad. He sings along merrily, gesticulating while smoking a cigarette. As the wind ruffling our hair sends ash blowing through the truck cab, I try to will it away from the cakes with the power of my mind.

I’d arrived in Vancouver a few days earlier to make a wedding cake for an old friend—my gift to the couple. I was staying with Maggie, who would be my wedding date. I’d packed cake pans, palette knives and a bench scraper after sending her a list of all the equipment I needed that she might not have. She met me at the train station and, after a celebratory meal of karaage and kimchi udon at an izakaya, we retired for the night.

Maggie left early the next morning to go to work, and I wandered through her loft, searching for coffee. I immediately noticed a problem. Maggie’s kitchen, where I would ostensibly make a wedding cake for 100 people over the next few days, was equipped with just a hot plate, a toaster oven and a mini fridge. Everything I take for granted as a pastry chef suddenly came into stark relief. Never would I have thought to include a standard-sized fridge and oven on my equipment list—though, to be fair, Maggie could make a mean fruit pie in that toaster oven.

In her typical breezy fashion, she assured me we could simply make the cake at a friend’s house. As it turned out, that friend’s oven didn’t have a working temperature dial—something I discovered after hauling flour, sugar and butter for what felt like a thousand long Vancouver blocks. Not so bad, then, that I only ended up burning one of six cake layers!

The next day I rode the bus up Main St. with yet more ingredients to the condo where another friend was staying. There, my 12-inch cake pan only just barely slid, with a gentle shove, into its unusually small oven. Still, on the bus ride home, the cake was golden and warm in my lap. It was lemon poppy seed, to be filled with homemade raspberry jam and lemon curd, iced with buttercream and covered in fondant.

I managed to assemble it in Maggie’s makeshift kitchen, only having to run once to the restaurant where she worked to borrow a pastry brush. The topper was a beautiful porcelain fox and rabbit in place of the traditional bride and groom, so I fashioned bugs, fruits, flowers and other forest denizens out of marzipan to decorate. I was still fashioning them the morning of the wedding, now desperately, as Maggie used a jigsaw to cut a huge slab of wood into a board, on which we’d serve the cake. Somehow, with the help of her speed-demon father, we made it to the site. I frantically assembled the cake, brushing off what might have been a little stray ash here and there.

Each time I make a wedding cake for a friend, I end up with a similar, if slightly less dramatic, story. I’m in Ontario cottage country, heels in hand, hobbling down a gravel road as fast as I can to reach the ceremony just as it begins, having been down to the wire piping and toasting meringue to cover a s’mores cake. Or I’m in Montreal, pulled up in front of a friend’s pastry shop to urgently borrow more buttercream after running out, the funfetti cake I’ve baked balanced on the roof of my car as I finish the decorating. Or ingredient substitutions abound as I’m making a Black Forest cake on the tiny island of Gabriola, where it turns out both unsalted butter and kirsch are in short supply.

Every single time, I sweat, curse and pray my way through the days leading up to the wedding. Every single time, I swear it’s the last time I give a cake as a gift—a promise I never end up keeping. For all the chaos involved, it ends up being worth it: a beautiful way to play a part in a big celebration of love. Besides, as long as you don’t count the blood, sweat and tears, it costs me less than most anything on the registry.

Almost every couple for whom I’ve made a wedding cake now lives far away. Some are divorced. But to have offered each of them a cake spectacular enough to celebrate one of the most important days of their lives, well, that’s the real icing on the cake. Some, like Sarah and Jeff’s, fit them perfectly: woodland flora and fauna for the camping couple who met at MEC. Others suffered from my flights of fancy (and food colouring mishaps). Still, those cakes live on in wedding albums and in memories—the sparkling eyes of two people very much in love captured in the very rare instance of attempting to cut something together with only one knife and feeding each other a dessert that I made just for them. Having just made my own cake (much easier in my own kitchen, but with the added stress of it being my own wedding), I can attest that moment is pure magic.