5 Ways Canada's First Cheesecake Factory Is Totally Over The Top, Not Including The Cheesecake 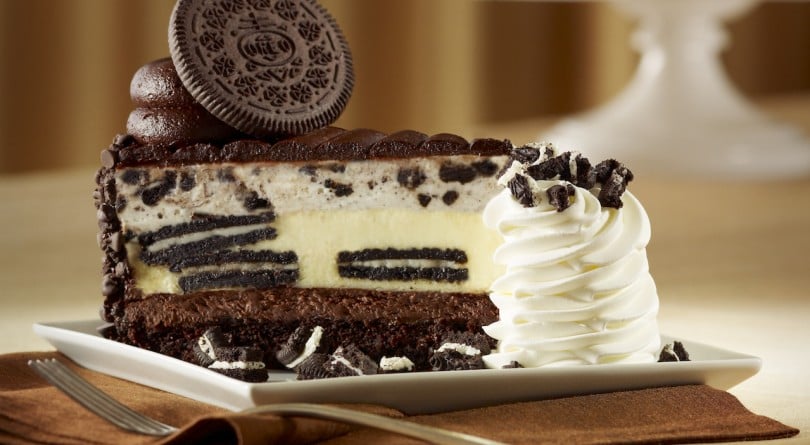 The highly anticipated Cheesecake Factory has finally landed in Canada. The American chain — also known as one of Drake’s favourite restaurants — opens at Toronto’s Yorkdale Shopping Centre on November 21. But the massive, 10,000 square-foot eatery has been giving diners a sneak peek before it makes its official debut — and I got to check it out.

I last ate at The Cheesecake Factory (in Aventura, Florida) in the early 2000s, and the restaurant’s menu and aesthetic has stayed the same since then. Despite Toronto’s quickly evolving and innovative culinary scene, Cheesecake (as Drake affectionately calls it) is a time warp featuring a mishmash of architectural styles, wicker chairs, an enormous, spiral-bound menu and gargantuan portions — individual entrées each come served on plates the size of platters.

The clincher is a sprawling, double-sided cheesecake menu (because this is The Cheesecake Factory, after all). Besides the more-than-50 dessert options, here are five ways the chain’s first-ever Canadian location goes way over the top. 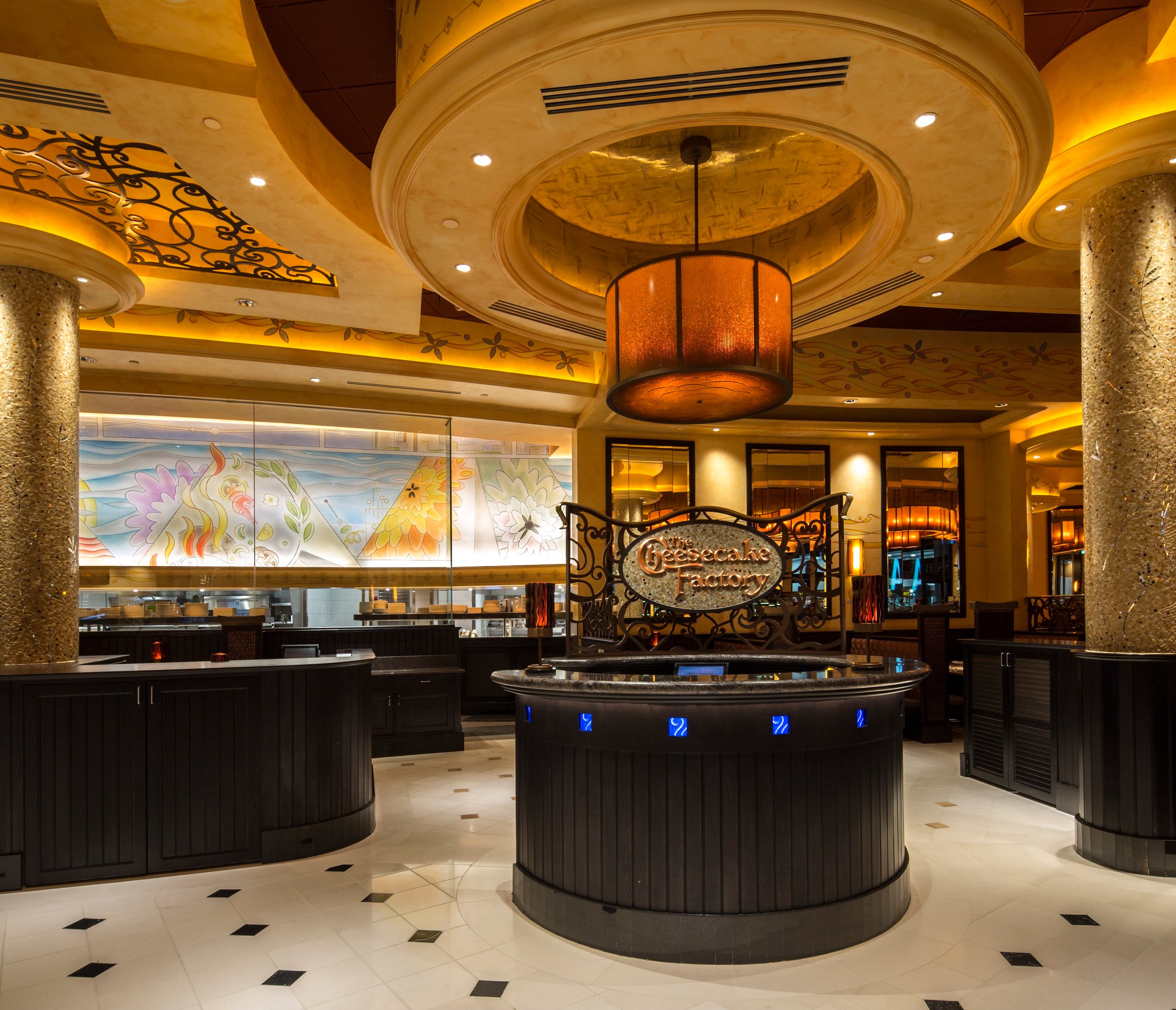 Cleveland game developer Max Krieger’s Twitter essay about Cheesecake’s aesthetic went viral — likely because he described the restaurant (which looks the same regardless of where it’s located) as a “postmodern design hellscape.” It incorporates various architectural styles to create a unique environment that (along with the food) is an assault on your senses — in the best way. Think of it as a nostalgic dinner theme park.

At The Cheesecake Factory, all cocktails are doubles, naturally. I started my meal with a super-sweet pineapple Moscow mule (vodka, pineapple juice, ginger beer and lime) in a pint glass and an equally sugary cucumber-and-gin mojito. Like any restaurant that makes you nostalgic for the early 2000s (a time of Canadian tuxedos and the Sex and the City finale), Cheesecake has a long list of blended cocktails and martinis — including a Cosmo. Even if you’re eschewing alcohol, water and soft drinks come in massive cups that are more like Big Gulps than dinner glasses. 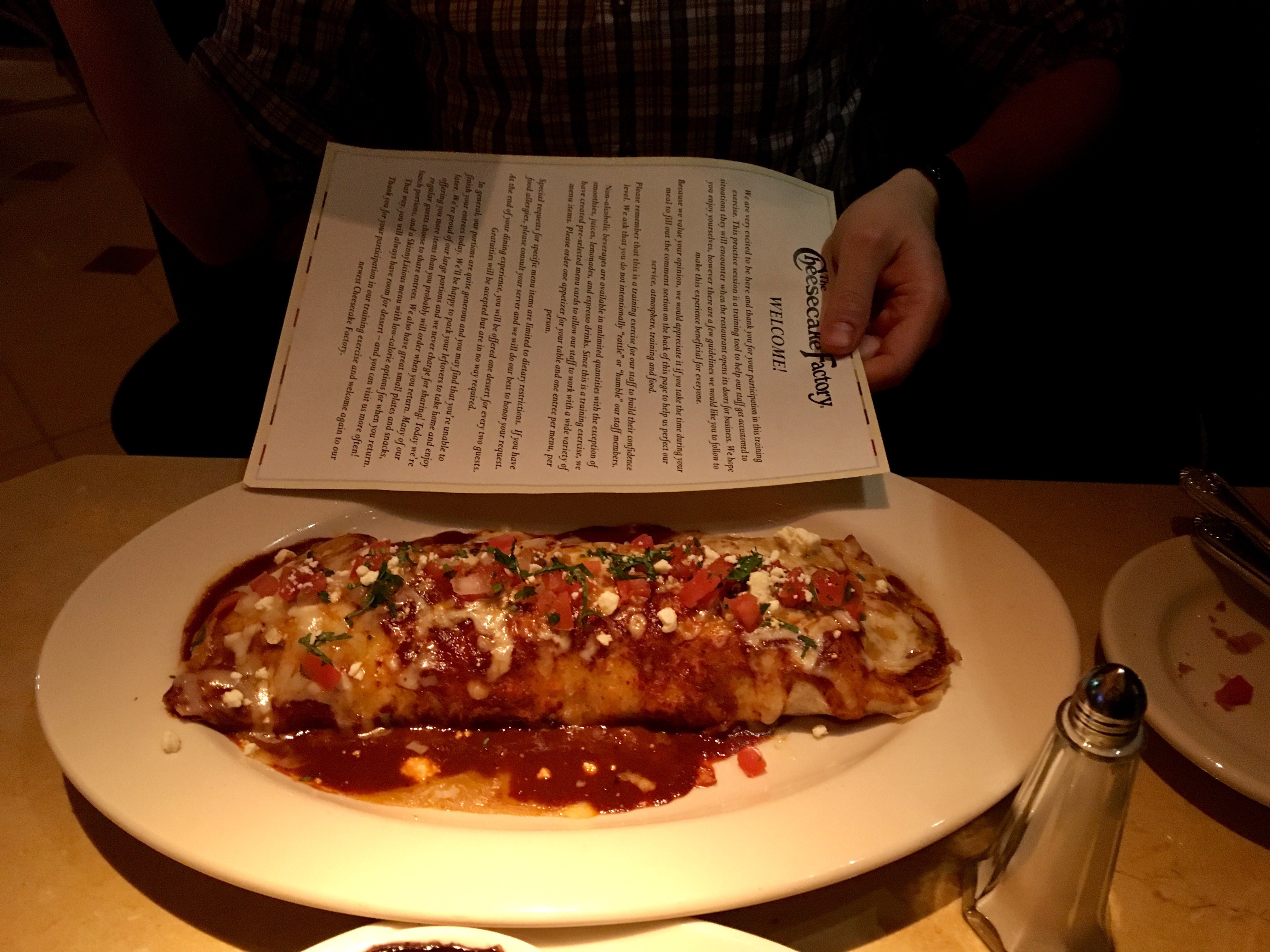 There are more than 250 dishes available. While the menu’s overwhelmingly meat-and-cheese-filled, there’s a handful of vegetarian and vegan options. But beware — the portions here are truly supersized. The Cheesecake Factory’s entrées have anywhere between 1,600 to 2,000 (or more) calories apiece. (Since The Cheesecake Factory, which originated in Beverly Hills, has only one location in Ontario, it doesn’t need to include caloric information on its menu.)

I embraced the full Cheesecake experience by ordering the most indulgent-looking dishes during my visit. For my appetizer, I got Tex-Mex egg rolls (deep-fried wonton wrappers stuffed with chicken, corn, black beans and cheese). Next up were the distinctly American-sounding chicken and biscuits, which came slathered in gravy — and could have comfortably fed three — and the factory burrito grande, which was about a foot long. (The menu described it as a “monster.”)

Dessert here is a doozy, mainly because of the sprawling cheesecake menu with more than 30 options available. I debated between the highly Instagrammable funfetti Celebration cheesecake, the Godiva chocolate creation and the Reese’s peanut butter chocolate cheesecake before landing on the Oreo cheesecake. It came with a pile of whipped cream and Oreo cookies embedded right in the cake — it did not disappoint. 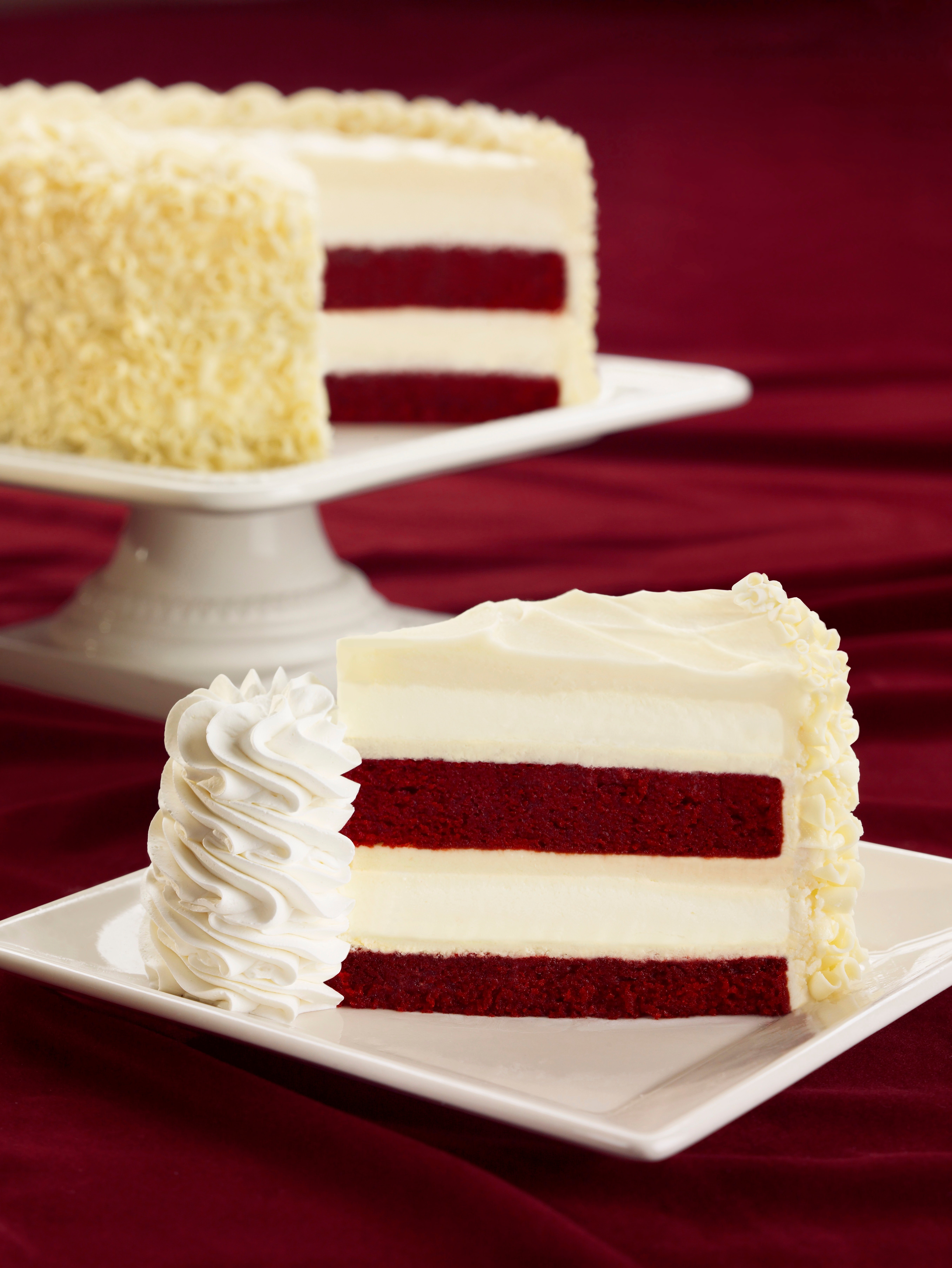 Most chain restaurants aim for consistency; Cheesecake takes it one step further. As the Globe and Mail explains, the restaurant’s kitchens operate just like a factory, with a rigid food assembly line to ensure diners from Tacoma to Toronto are all getting the same experience. Even the interiors don’t differ too much from city to city; Toronto’s Cheesecake Factory looks just like the locations south of the border. 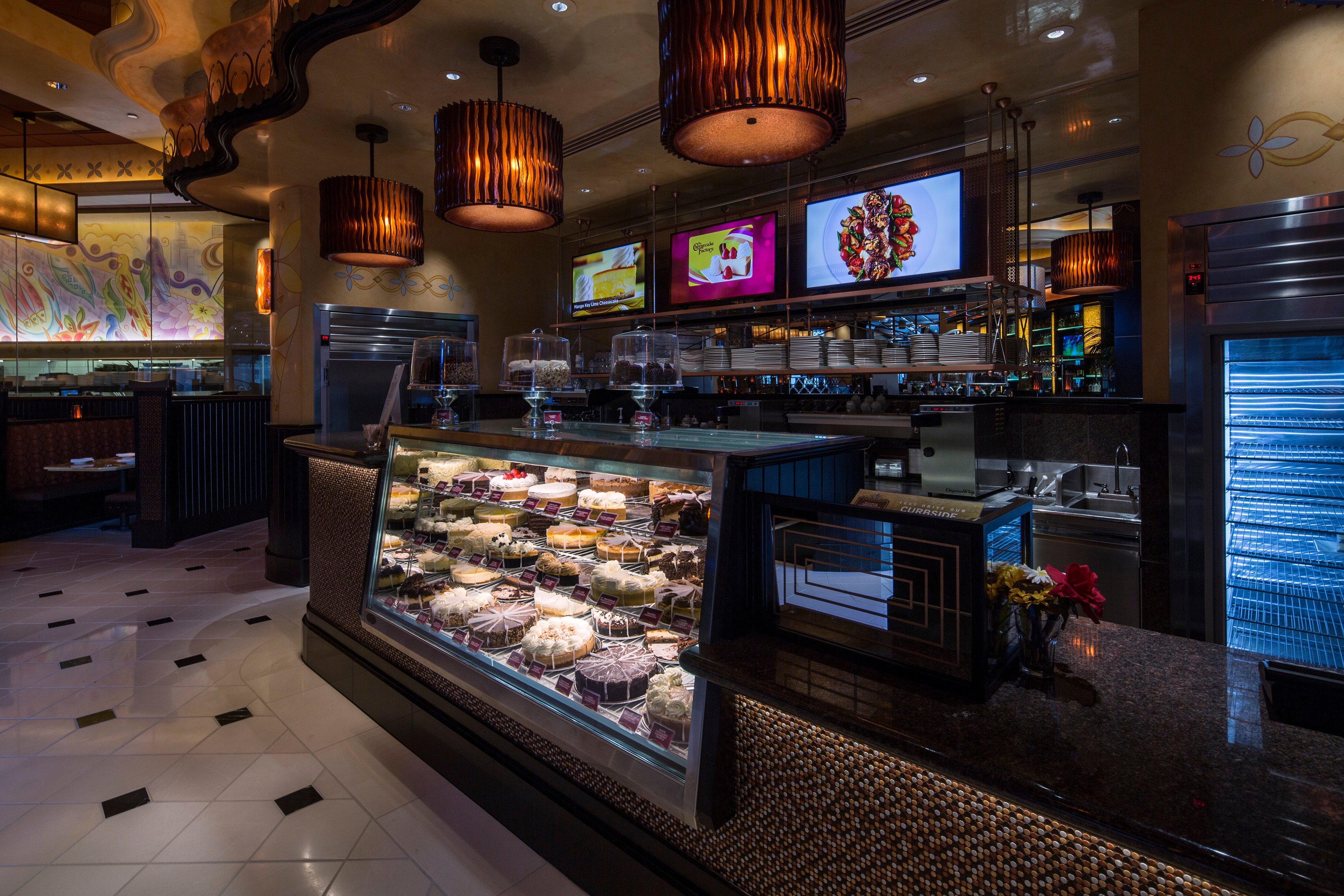 Perhaps that consistency is why the brand’s garnered a cult and celebrity following. Now, instead of lurking around Toronto’s luxury hotels and downtown restaurants, this restaurant might be the new place to spot your favourite star. Drake’s known to make appearances at Yorkdale — he even shot a promo video on site — and a slew of famous people, including NBA stars like Stephen Curry, Jennifer Lawrence and Mindy Kaling have publicly declared their love for Cheesecake. If you’re in Toronto, you too can see what the fuss is all about.