The Seven Spoons author talks to Chatelaine about power dynamics in the food world. 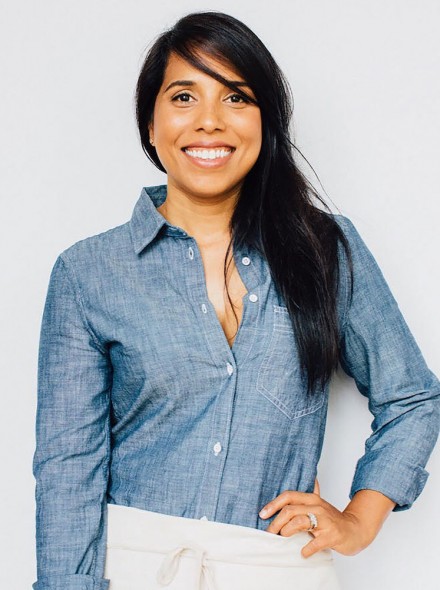 For the past year, award-winning cookbook author, blogger and food columnist Tara O’Brady has had the same tweet pinned to the top of her Twitter feed. It says: “Let’s stop using ‘ethnic’ to mean ‘non-white-people’s’ food. (See also: music, dress, traditions …).”

The word, she says, is divisive. O’Brady regularly takes inspiration from various types of cuisine while developing recipes for her popular blog Seven Spoons — it’s all part of the joy of cooking, she says, but there’s a way to do this without appropriating other cultures.

Chatelaine spoke with O’Brady about that tweet, why it’s important to cite your sources and what we can expect in her next cookbook.

Why do you want to retire the phrase “ethnic food?”

One of the strengths of Canadian cooking, or restaurant cooking, is that there is an egalitarianism to it. And I hope that as we move forward we continue to embrace that. I grew up with a family that never put borders on food, I was very lucky that way.

My parents both lived in and visited many countries before coming to Canada; even after the move, their jobs kept them travelling.  It was never really [positioned] that we were having Mexican tonight or Italian tonight or Indian food: we were [just] having tacos, or spaghetti or daal and rice. We never declared that [one dish] was somebody else’s food and [another] was our food — so you could be respectful of tradition, and honour that culinary history, but at the same time, not add a hierarchy to it, or the sense that it’s “different” or “weird,” or for lack of a better term, “foreign.” And I love that about Canadians.

When we start putting food into categories of difference — that’s often when we start investing things with power and I think that’s something that a lot of food writers and people within the industry are dealing with right now. It’s an important conversation we’re having.

Is there a term you prefer?

If you’re talking about a culinary history, then name the country or name the region. If we can talk about the difference between Southern American food versus East Coast food — if we can recognize that level of regionality — we should be able to talk the same way about food from other countries, rather than having to put these great big labels [such as “African food” or “Asian food”] across it.

And we have to invest that equal attention to some of those cultures and some of those cuisines that have historically not held the same amount of power, or have had the same amount of interest, as your classic big cuisines of the culinary world — like French cooking. We will pronounce “coq au vin” but then come up with some ‘fun’ new way to name something, let’s say from Thai cooking or Indian food, because we declare it too hard to pronounce.

It goes back to the first thing you learn in school, which is cite your sources — that’s all it is. It’s about credit and it’s about sharing and it’s about humbleness. In many ways, it’s not pretending you’re the first person to ever discover it, or describing it as “new” — acknowledge that it comes from somewhere. There is context in everything we do — it’s the recognition of that context.

Cite your sources. That’s so simple.

I love when there’s an author I respect, or someone I look up to, and they tell me who they respect and they tell me where they got an idea from. It makes feel like they’re well read — which, to me, is even better than someone saying they came up with something — and then it creates that next link. If one cook is making it this way, maybe I’ll look up that original recipe. And that leads to another question, another action, and another — and that leads to momentum within the industry.  And I’m never against that.

What work around this still needs to be done?

As much we need minority writers to tell minority stories, we also need to move towards believing  in a minority writer’s ability to tell stories, period. We can’t just define our minority writers by their heritage, an often fallback cliché. I talk about my heritage, of course — it’s an enormous part of me. But at the same time, I have more to offer than the colour of my skin.

On that note, what can we expect from your next cookbook?

The first book talks a lot about who I am when it comes to cooking and it really was a round-up of my best recipes from the last decade. The second book is moving a little bit more into your kitchen, the reader’s kitchen.

I really want to put the focus on the reader and make them feel like they can tackle any recipe, whether it’s mine or their own or someone else’s and teach them the ability to improvise.

Tara O’Brady was a panelist at Chatelaine’s The Big Dish event in Toronto on October 29. Click here for more interviews and stories from the women who took part.