Is It Time To Rethink The Casserole?

This mid-century relic isn’t popular with home cooks today, but it should be. Pantry-friendly and low-maintenance, casseroles may be the ultimate quarantine dish. 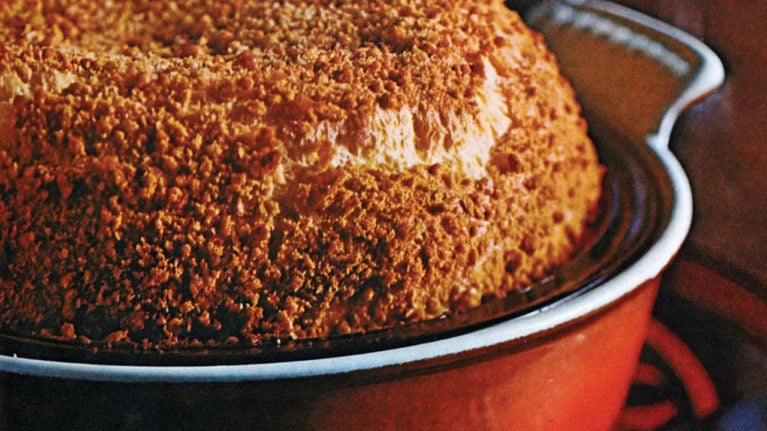 Casseroles—like this French chicken casserole from a 1973 back issue of Chatelaine—are due for a little quarantine cooking praise.

I’ve spent the majority of the pandemic sitting on the couch in leggings while listlessly scrolling through Twitter, as if absorbing other people’s thoughts will somehow make me feel anything other than coated in a thick layer of malaise, like I’ve taken a bath in mayonnaise. There, among all the posts about sourdough loaves and knitting projects and finally-wearing-makeup-after-three-weeks selfies, is one quarantine pastime I did not expect to see: people are making a lot more casseroles.

Quarantine has managed to turn previously accomplished home cooks into full-blown domestic goddesses, and inspired the less culinarily-inclined to blow the dust off their frying pans and get to work. (This video of Balmain designer Olivier Rousteing learning to cook an egg comes to mind.) Amid all the content of caramelized shallots and lemon slices lain gingerly atop of tea cakes, this newfound predilection for the perennially unchic casserole feels aesthetically out of place.

Often sandwiched between recipes for tomato aspic and devilled eggs in scores of uncanny mid century cookbooks, casseroles have not endeared themselves to today’s generation of home cooks—until now. They’re decidedly lowbrow, the kind of dish at which my bougie restaurant worker boyfriend thumbs his nose, and the not-undeserving subject of scalding jokes about white people food. But as much as I’ve noticed a rise in online appreciation for gloppy food in my own online world, it hasn’t necessarily translated to real life. At one of my early quarantine grocery shops, around the time the going value of toilet paper shot higher than the price of gold, I couldn’t help but notice that though frozen vegetables and canned tomatoes were completely cleaned out, the shelves of condensed cream of mushroom soup remained oddly full.

I found this oversight mysterious. Is casserole not the ultimate quarantine food? There’s something wildly appealing about the conglomeration of a protein, a carb, and a veggie, bound with a can of condensed soup and baked into a crispy, cheesy, bubbling mass. Casseroles are terrifically easy to cook and result in few dirty dishes. They take the guesswork out of timing various side dishes. They’re made almost entirely out of shelf-stable ingredients. Plus, their creamy heaviness satisfies in a way no salad ever can. Before COVID-19, food that settled like a lump in the stomach was something to be avoided, but now that many have little else to do but sit on the couch and digest, that’s no longer the case.

“One-pot dishes have a very long history, but casseroles as we know them originate in the 1930s,” says Dr. Janis Thiessen, a food historian at the University of Winnipeg and the author of Snacks: A Canadian Food History. Casseroles first emerged in North America during the Great Depression, among social conditions not unlike the ones we’re currently experiencing, spurred along by food processing breakthroughs that led to the widespread availability of canned and frozen foods.

“The canned food industry saw [casseroles] as an absolute godsend for alternative uses for canned foods,” says Kentucky-based food historian Rachel Laudan. Largely built on dried noodles and canned vegetables and soups, casseroles served as propaganda for food corporations, which disseminated recipes as efficient marketing strategies for their products. But it wasn’t until the 1950s, after more women began to work outside the home, that casseroles really hit their stride, thanks to their quickness and relative ease. Thiessen likens them to the 1950s equivalent of sheet-pan dinners: “They’re fast, easy, and you only mess up a few dishes so you’re not going to be cleaning up forever.”

Casseroles fell out of favour around the 1970s, after improvements in transport infrastructure and widespread globalization gave Canadians access to a wider variety of fresh fruits and vegetables regardless of the season. And as the horizons of home cooks began to expand, so too did their palates. The slow food movement’s insistence on the superiority of fresh, local produce cast aspersions onto the nutritional value of canned and frozen food, which eventually came to be seen as a desperate measure rather than part of a healthy, balanced diet. At a time when a simple trip to the grocery store is fraught with stress and the safest thing to cook is what’s already in your kitchen, however, perhaps it’s time to re-evaluate some of this thinking.

“There’s no one definition of a casserole,” says Karon Liu, a food reporter at the Toronto Star. (Liu has been posting recipes for his quarantine meals on Instagram, including a tuna noodle skillet casserole.) Any dish that combines a protein, a carb and a vegetable in a sauce, all baked together into a steaming heap, could be considered a casserole, from Hong Kong-style baked spaghetti to Macanese baked curry rice. As long as it incorporates these building blocks, a casserole can withstand an endless variety of substitutions. Liu is adamant that as long as each building block is accounted for, any casserole will turn out a success. “From a technical standpoint, it’s pretty easy. You just put some noodles or rice in there with whatever vegetables you have, pour a crap ton of cream sauce or cheese on it, and just bake it. There’s no High Council of Casseroles to tell you what you are doing is wrong.”

Begin with a carb of your choice. This could be pasta, rice, potatoes or, at Liu’s suggestion, “chopped up cubes of stale bread.” The carb will need to be pre-cooked before going in the casserole dish, so be mindful of timing. If you’re on a limited time frame, a packet of egg noodles will cook in under five minutes, while regular pasta takes longer. It’s also best to slightly undercook your carb, as it will continue cooking in the oven.

Choose your protein and vegetables

Canned tuna and frozen peas are classic casserole fillers, but they can be easily substituted based on your tastes or whatever is available in the pantry. Don’t like tuna? Thiessen suggests adding a can of flaked ham instead. Have some sad-looking carrots sitting in the crisper? Chop them up and add them to the casserole. Any canned, frozen or fresh vegetables will do. Vegetables should be cooked to tender-crisp (or thawed, if frozen) before being added to the casserole to ensure they’re cooked through when the casserole is finished. If using dried mushrooms, be sure to rehydrate first before adding.

One of the most important steps to a casserole is the thick sauce poured over top: it acts as a binding agent for all the individual ingredients. “You can do a cream sauce, a tomato-based sauce, or a curry sauce,” says Liu. If cream of mushroom soup is a textural turn-off for you, he suggests whipping up a classic béchamel sauce instead.

Finish off the casserole with a topping of breadcrumbs, cheese or ideally both—“something that will brown or melt really well in the oven,” says Liu. I keep stale bread heels in the freezer to use as homemade breadcrumbs, but a panko or a classic breadcrumb will work just as well. The best cheese to use is one that will melt into a browned, crisp layer. Cheddar, mozzarella, gruyere or Monterey jack are all good options. The ultimate casserole is a juxtaposition of textures, with the creamy and the crunchy ingredients complementing each other in every bite.

Casseroles are open season for experimentation and will go as far as your mind will take you. Dreaming of pizza but don’t have the energy to make the dough? Mix rice, tomato sauce, pepperoni (or mushrooms, olives etc.) and top with mozzarella for a pizza casserole. Craving Hamburger Helper? Mix macaroni, cream sauce, ground beef and top with crispy onions for a convincing dupe. Even chicken noodle soup can be adapted into casserole form using egg noodles, carrots, celery, and shredded chicken doused in béchamel sauce.

For those ready to embark on a casserole-making journey, Liu’s advice is to find a basic recipe online and follow it as best you can, making substitutions only when necessary. The slapdash, no-recipe approach is best suited to confident home cooks who have no qualms with experimenting in the kitchen. His advice for people being “thrown into” home-cooking for the first time is to give yourself a break. “Don’t worry about what you’re seeing on social media. You’ll be fine.” After all, he says, “It’s a casserole, it’s very forgiving.”