Why I’m Firing My Gas Stove

Gas stoves are a source of greenhouse gas emissions, and they pollute the air inside your home. The good news is, there’s a cleaner and healthier way to cook your food. 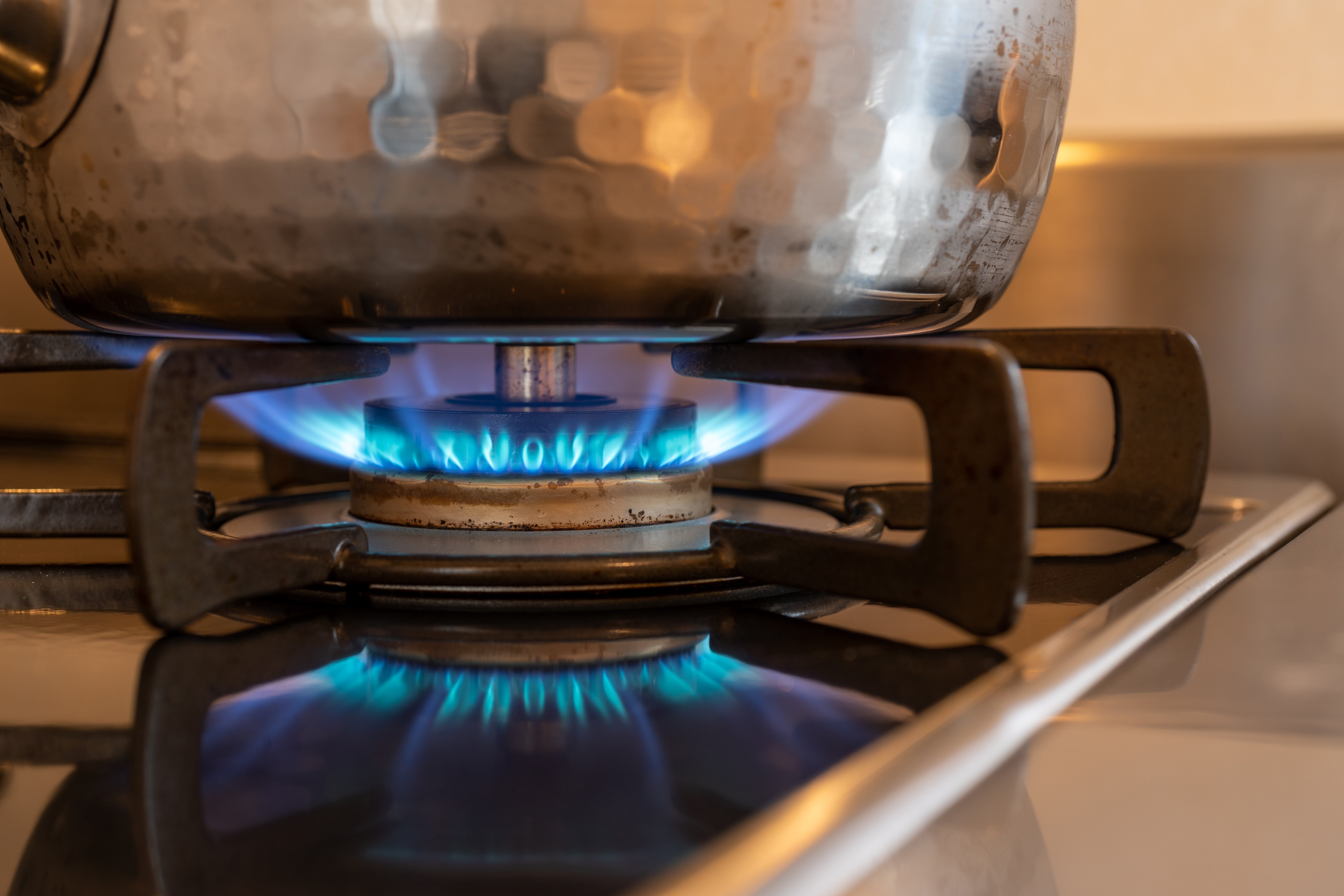 Last year my husband and I started transitioning our home off of fossil fuels, with the goal of making our home net zero. We got a heat pump to heat and cool our home, we replaced our gas water heater with a heat pump water heater, and we installed solar panels. Now the only thing in our home using gas is our *flaming* stove. And it’s really starting to give us gas pains.

Not only is it polluting our indoor air, but it’s polluting the environment. And with two little girls who love to “help” us cook, we’re constantly worried about tiny fingers getting burned.

We’re now shopping for an induction stove—the most environmentally conscious, efficient, and dare I say, coolest way to cook. Here’s everything you need to know about why we’re firing our gas stove and switching to induction.

Why we need to ease off the gas

The gas industry has pumped a lot of money into convincing us that gas stoves are the superior way to cook. But the more we learn about the health and environmental impacts of natural gas, the less “natural” it seems.

So-called natural gas is mainly methane—a potent greenhouse gas that has 84 to 86 times the global warming potential of CO2 over a 20-year period. Oil and gas facilities are responsible for nearly 44 percent of Canada’s methane emissions and 26 percent of the country’s GHG emissions.

“I think something people overlook is where this natural gas is coming from,” says Dr. Melissa Lem, president-elect of the Canadian Association of Physicians for the Environment.

Most of Canada’s natural gas is mined in northern B.C. through a process called hydraulic fracturing, or “fracking.” A well is drilled down to rock formations where natural gas deposits are, and a slurry of chemicals, water and sand is blasted in, fracturing the rock. Some of the toxic soup stays underground, and some returns to the surface, where it’s stored in open frac ponds. One fracking well can use and pollute more than 10 million litres of fresh water—most of which is permanently removed from the water cycle. Not to mention contaminating the air and soil. With more than 20,000 fracking wells in B.C., the damage is mind boggling.

And once natural gas is piped to our homes, it continues to pollute. In 2018, natural gas was responsible for 36.7 megatons of residential CO2-equivalent emissions.

Are gas stoves bad for the climate?

Every time you turn on a burner or heat up your oven, your gas range produces carbon dioxide. It’s estimated that gas stoves in the U.S. emit 6.8 million tons of CO2 each year—the climate impact of 1,889,915 gas-powered cars. Natural Resources Canada estimates that in 2018, gas stoves in Canada emitted 370,000 tonnes of CO2.

Gas stoves also emit unburned methane, through leaks and incomplete combustion. A recent study led by Stanford University measured methane emissions from gas stoves inside 53 U.S. homes, and found that the average stove (burner plus oven) emits 649 grams of methane each year. With more than 40 million U.S. households cooking with gas, researchers estimate the total emissions from gas stoves to be 28.1 gigagrams of methane per year. Based on a 20-year timescale for the lifetime of methane, that’s like adding another 500,000 cars to the roads.

Is cooking with gas bad for your health?

Burning gas produces pollutants you don’t get with electric or induction stoves. The most concerning is nitrogen dioxide (NO2), a reddish-brown gas that is associated with respiratory symptoms like wheezing, shortness of breath, and chest tightness—especially in children with asthma. Homes with gas stoves can have more than twice the NO2 as those with electric ranges, with levels exceeding Health Canada’s residential indoor air quality guidelines. Lem says that most existing Canadian gas ranges don’t meet the long-term exposure limits for NO2.

Gas stoves also emit carbon monoxide (CO), a tasteless, odourless, and colourless gas that inhibits oxygen intake. Although a carbon monoxide detector will go off at dangerous concentrations, low levels of carbon monoxide can cause fatigue, and are harmful to people with underlying medical conditions.

Cooking food with any type of stove produces particulate matter, a mixture of solids and aerosols. Gas stoves, however, emit twice as much as electric or induction. That’s because particulate matter is created from the flame itself.

According to the World Health Organization, “Chronic exposure to particles contributes to the risk of developing cardiovascular and respiratory diseases, as well as of lung cancer.” Fine particulate matter, which is made up of particles 2.5 microns or less, is especially dangerous; it can travel deep into the lungs and enter the bloodstream.

Liu Sun is a researcher with Health Canada who has studied the effectiveness of ventilation on removing particulate matter. She says it’s important to use a range hood (with any stove) that vents outdoors, versus the type that recirculates the air. Using a good range hood for the entire time you’re cooking, and up to 15 minutes afterward, can remove up to 80 percent of particles. But that still leaves 20 percent.

“Even though we can have the option of running our range hood, it doesn’t guarantee all the air pollutants can be vented out,” says Sun.

If you’re a healthy adult with a good ventilation system, a gas stove isn’t necessarily going to make you sick. But if you have respiratory or heart issues—or if you have children in the house—an induction stove is a healthier option. And, in general, if you want to substantially reduce the indoor air pollution from cooking, the healthiest and safest bet is an induction cooktop.

With gas and electric stoves, a burner or element produces heat, which travels through cookware to heat food or liquids indirectly. Induction technology, on the other hand, uses electromagnetic energy to heat pots and pans directly. An electric current passes through a coiled copper wire under the cooktop, creating a magnetic current throughout the cookware to produce heat. The stovetop doesn’t get hot—only the cookware.

Induction technology is compatible with stainless steel, cast iron, and enamelled iron, but aluminium and copper typically don’t work (although there is now magnetized copper cookware for induction). Check your pots and pans with a magnet: if it sticks, your cookware will work.

What are the benefits of induction?

Because induction cookware is heated directly, very little heat is wasted—making induction technology extremely efficient. Induction can deliver 80 to 90 percent of its electromagnetic energy to the cookware. Gas, on the other hand, only converts 38 percent of its energy, and electric converts 70 percent.

With an induction cooktop or range, the cooktop itself doesn’t get hot—only the cookware does. So there’s no risk of burning yourself on a hot stove (a huge bonus if you have kids).

Induction is super responsive, so it can change temperature almost instantly. With induction, you can boil water almost twice as fast than with a gas stove.

Induction heats pots and pans evenly, so you don’t get any hot or cold spots. And you don’t need to shift the pan around while you’re cooking. You can also maintain an even, precise temperature. If you want to simmer a sauce or melt chocolate, induction can work at a very low temperature and not cause anything to burn.

One of my biggest pet peeves about my gas stove (besides emissions and safety) is cleaning it. With induction, the cooktop never gets hot—so any spills or splatter don’t bake on, and you can wipe them off easily as soon as you’re done cooking.

What if I can’t switch to induction yet?

Don’t panic if you can’t fire your gas stove just yet. Not everyone can afford to go out and buy a new stove, and if you rent, switching is not likely an option. Or if your gas stove is still relatively new, you might want to wait until it reaches its end of life. The good news is, there are ways to use your gas stove less, reducing your exposure to air pollutants and producing less GHG emissions.

Try doing more of your cooking with electric appliances like a microwave, toaster oven, pressure cooker, or air fryer. And if you want to try induction with minimal investment, you can buy a single burner induction cooktop for around $50, like the TILLREDA cooktop from Ikea.

“Part of a just transition is making sure that people who are exposed to the most pollution are thought about first in the transition,” says Andee Krasner, program manager of Climate and Health at the Greater Boston Physicians for Social Responsibility. “And one way that we can do that is these single induction burners as we transition away from the larger gas stoves. Because you can have one or two and it works just as well as having a full stove.”

When you do use a gas stove, make sure to properly ventilate. If your range hood doesn’t vent to the outdoors, change the filters often. If you don’t have a range hood, open a window.

“Whether you’re a healthy adult or not, you need to ventilate your stove,” says Krasner. “Electric or gas, because you want to make sure you vent that particulate matter out.”