3 Apps That Tackle Food Waste—And Help You Save Money

A win-win situation for consumers, businesses and the environment. 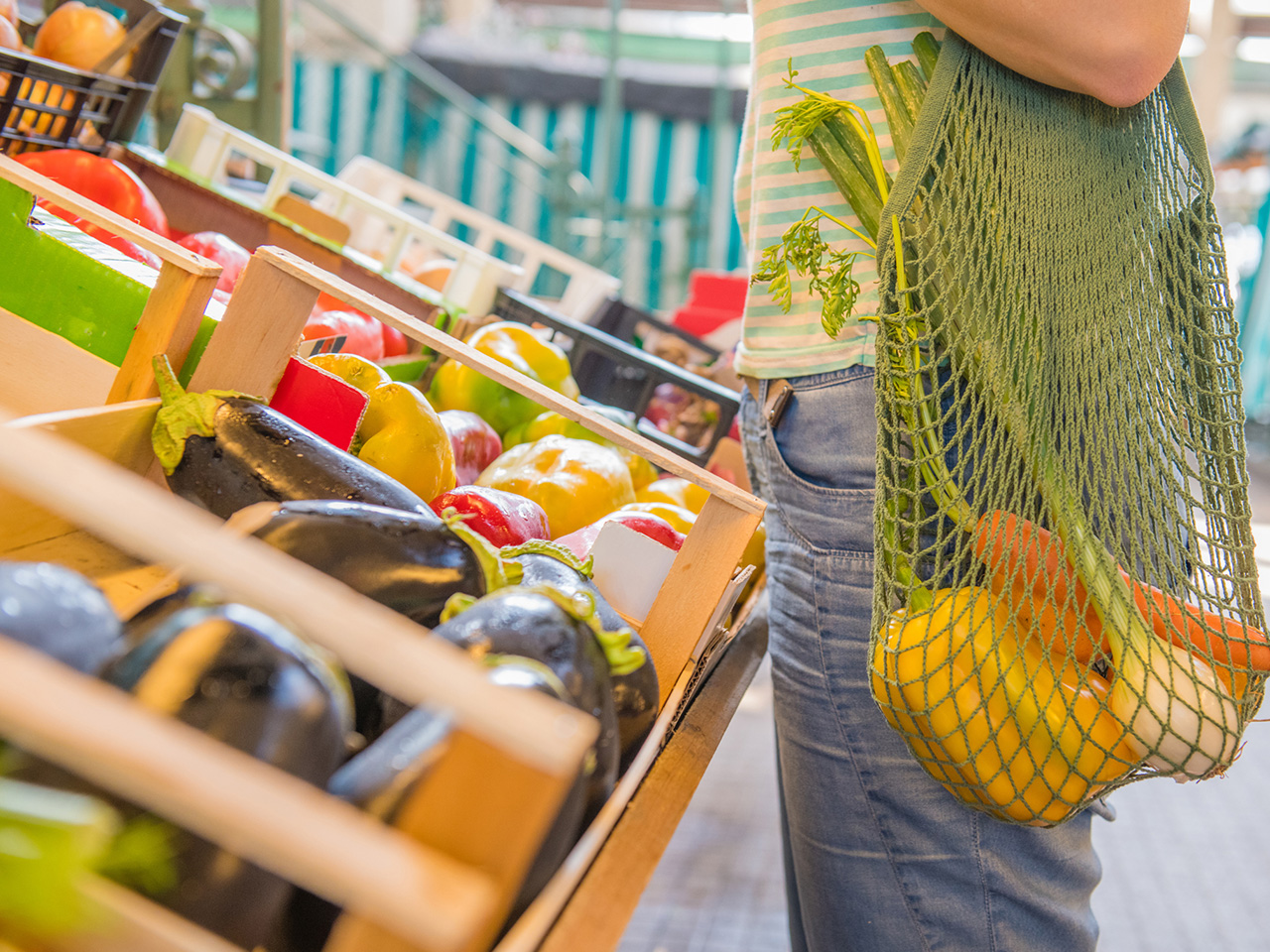 I used to work at a cafe in Toronto that would throw out unsold brownies and tarts at the end of the night—not because they were stale but because they weren’t deemed “fresh” to serve to customers the next day. Unfortunately, this unnecessary food waste is a common practice for cafes, restaurants and grocery stores—and it’s one factor contributing to Canada’s growing food waste problem.

The stats on food waste are unappetizing—according to a 2019 report by Second Harvest, Canada’s largest food rescue organization, 35.5 million tonnes of food produced in Canada is lost or wasted each year, and 11.2 million tonnes could be rescued to support communities across the country. (That’s equivalent to the weight of almost 95 CN Towers.) All those resources ending up in the trash also have huge environmental costs—an often-cited UN statistic says that if the amount of food wasted by the world was a country, it would be the third-largest carbon-emitting country globally.

Tammara Soma, research director at the Food Systems Lab at Simon Fraser University in Vancouver, says an important step in preventing food waste is the ability to plan how much food a business will use and sell, which can be tricky. “In all of our studies we found that even though people tried to plan, the everyday life of a restaurant or a catering company is actually quite complex. There are so many different factors at play, so it’s very hard to be specific and rigid, so that there is no extra food.”

While there may not be a sweeping solution for this issue, food waste apps have given businesses and consumers some agency to tackle this problem on the ground.

“The fact is that we know that there’s a lot of food to go around…a lot of times things are put into the landfill or are wasted when they’re actually edible, that’s the whole concept of avoidable food waste,” Soma explains. “These apps are trying to be the connector between people and food that would otherwise be wasted.”

Read on to learn about three innovative food waste apps available in Canada, how they work and how you can help divert food waste and enjoy some delicious eats from local restaurants.

Too Good To Go

Where: Participating businesses in Vancouver, Toronto, and Montreal, with plans to expand to other cities in 2022

The idea for this app was born in Denmark. Sam Kashani, who is managing its Canadian expansion, says its goal is to reduce food waste by allowing consumers to buy surplus food from restaurants, cafes and grocery stores at a discounted price. The app also encourages users to donate money to local food focussed charities that they’ve partnered with. They’re currently accepting donations for Foodshare Toronto on the app. 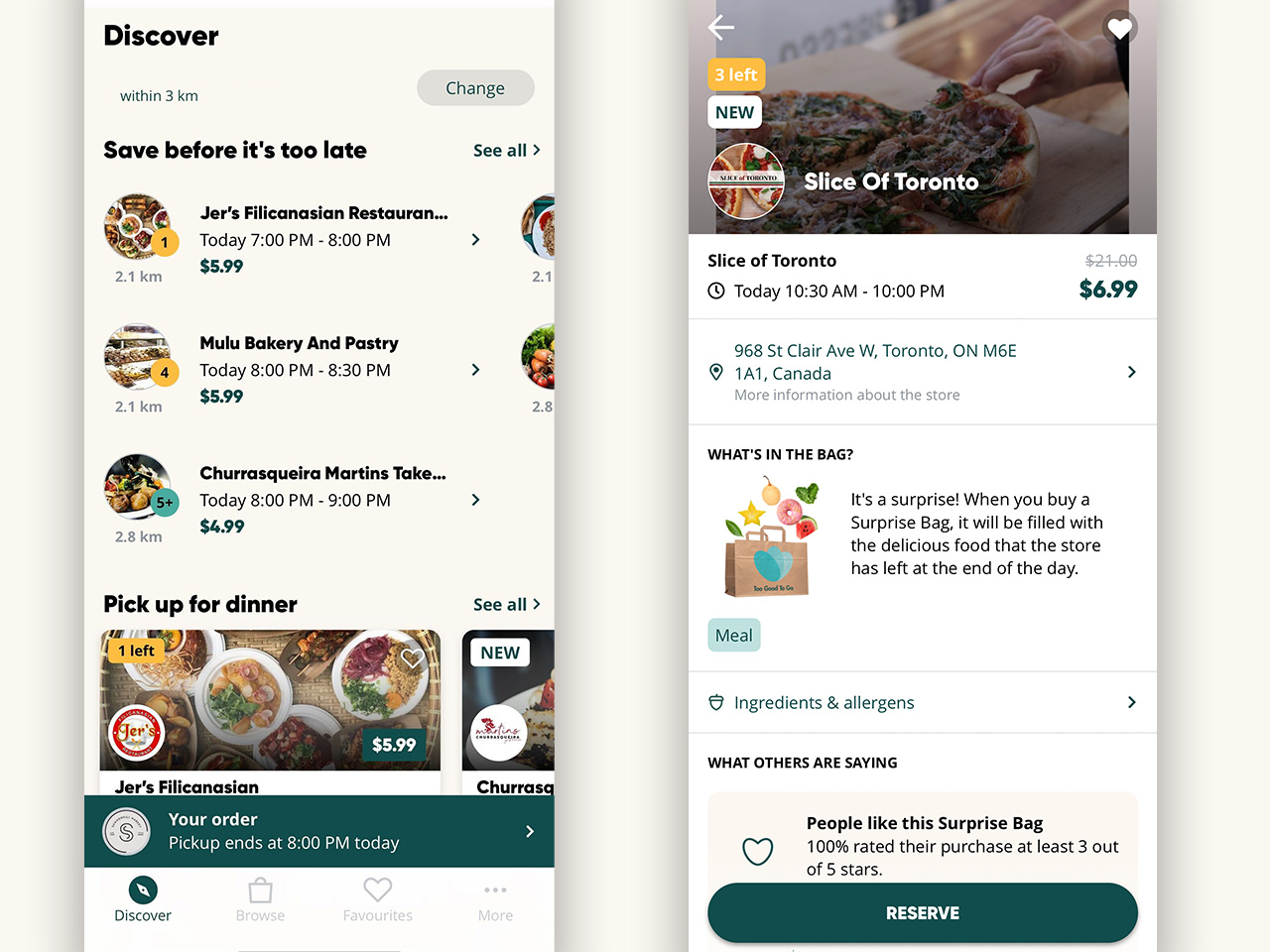 After you download the free app and create a profile, you can select whether you want stores shown within a three to 30 km radius of you. The app will then generate a list of businesses within your radius who have surplus food available (they’re called “surprise bags,” so you won’t know exactly what you’re going to get) and the pick up times. It’ll also indicate how many surprise bags are available from each business. You can add stores to your favourites, but the notifications are inconsistent, so it doesn’t mean the app will notify you when they have a surprise bag up for grabs. If something catches your eye, you can reserve a bag and the app gives you an order ID that you’ll have to show when you pick up. The store will also send you an email and phone notification reminder when your bag is ready for pick-up. 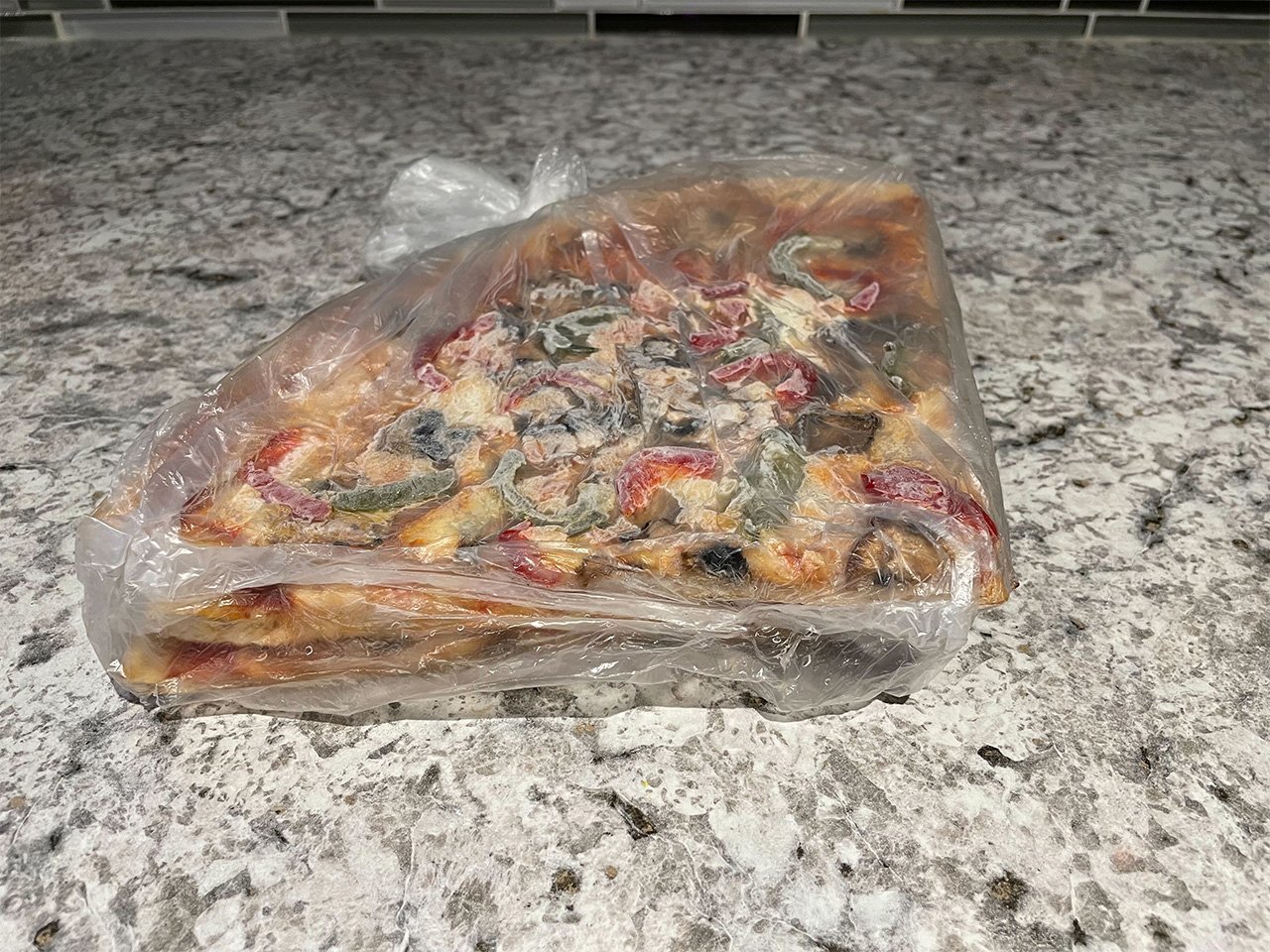 I had been meaning to go to a pizzeria in my neighbourhood for quite some time. Conveniently, Slice of Toronto, said pizza place, had a surprise bag available. I got an extra large, frozen pizza (half veggie and half pepperoni) originally valued at $21 for $6.99. I also wanted to see how much I could save on groceries, so I bought a surprise bag of assorted produce from Summerhill Market valued at $15. The bag included shishito peppers, a large package of mini potatoes and a bunch of asparagus, all for only $4.99—an excellent deal for the amount of produce. All of the veggies looked nowhere near their expiration dates. 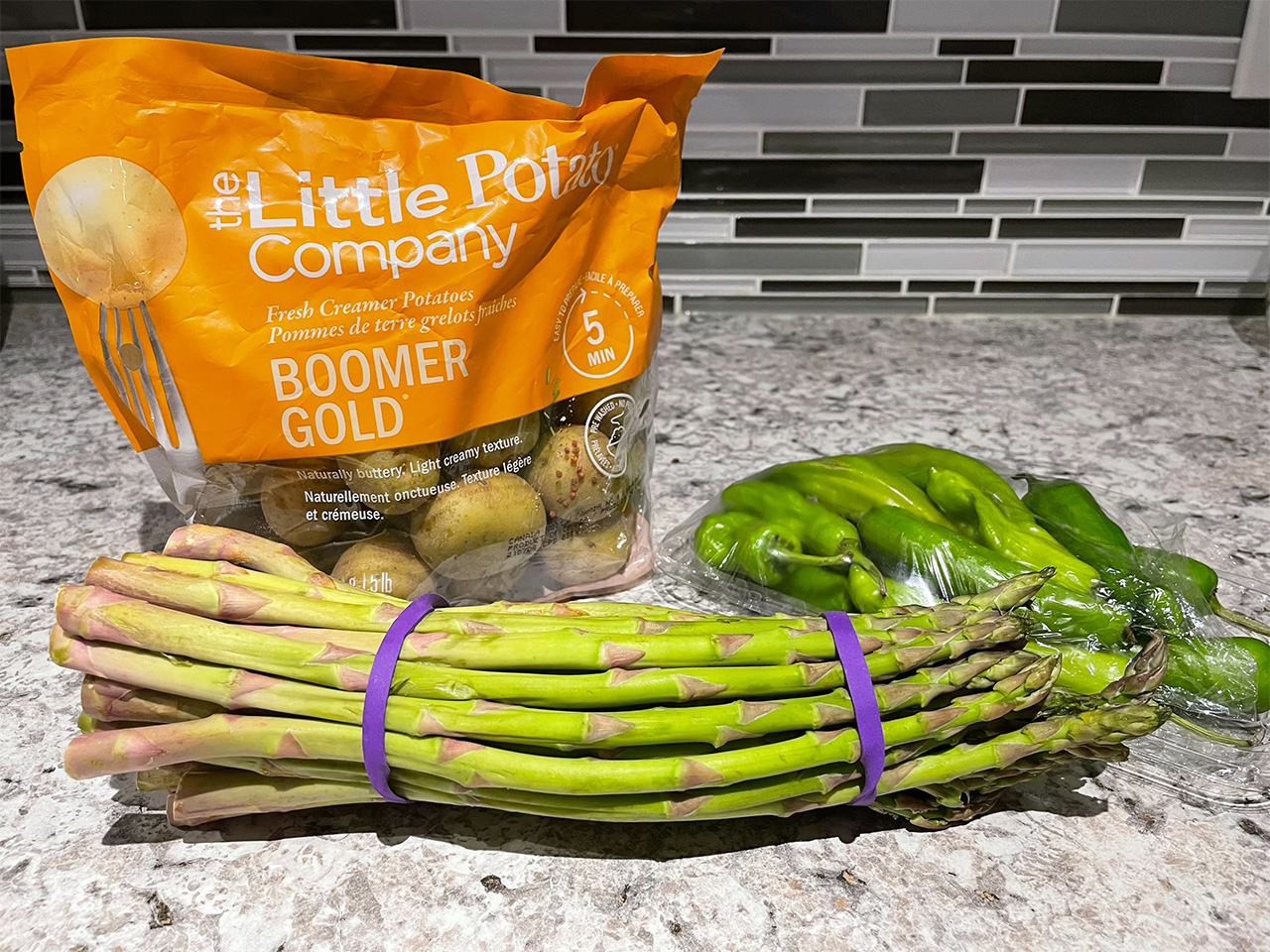 However, be aware that there’s a possibility—as I discovered—that your order could get cancelled. I ordered from a cafe that was about a 30 minute commute away from me. The pick up time was between 2 p.m. and 3 p.m., so I left at 2 p.m. When I arrived at around 2:20 p.m., the employee said they had just cancelled the order because they didn’t have enough surplus food available (this was also indicated in an email that I received just when I arrived at the cafe). Thankfully, I wasn’t charged and they gave me a complimentary cookie, so my trip wasn’t completely fruitless. Unless you can easily access a car, I would recommend sticking to businesses nearby in case this happens.

All in all, this app is perfect if you want to try new cafes or restaurants without breaking the bank. You can also get a bulk of produce for cheap from grocery stores, and since it’s a surprise bag, it’ll allow you to experiment with veggies you might not have cooked with before.

Where: Participating grocery stores across Canada

After discovering—through conversations with hundreds of grocery store employees and executives—that supermarkets often tossed food items that were within two weeks of their best before dates, Josh Domingues knew he was onto something. So, he created Flashfood, which allows customers to buy food approaching its best before date at a discounted price. 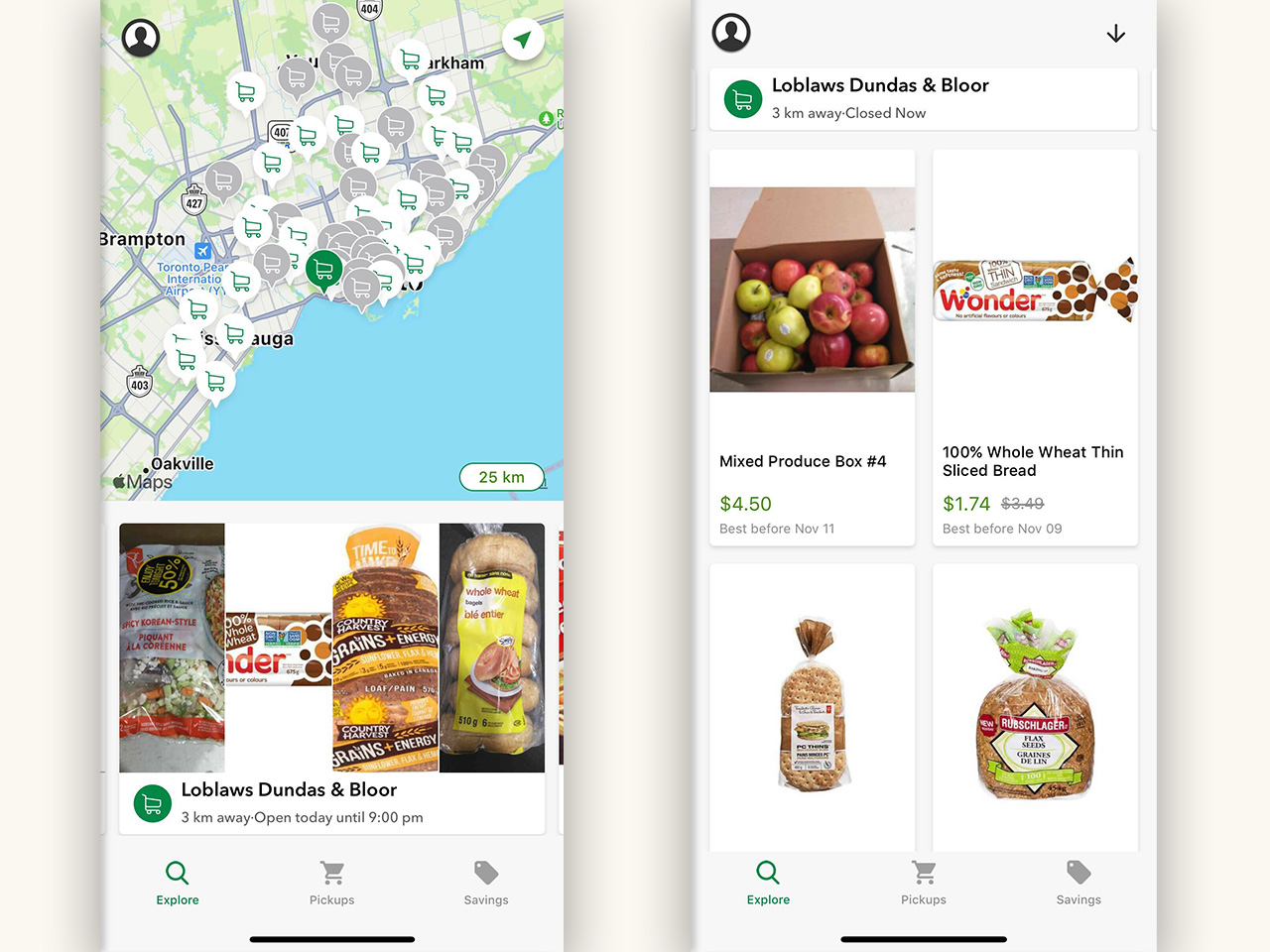 Once you download the free app and create a profile, it’ll use your location to generate a map of grocery stores near you that participate in the program. Green and white grocery cart symbols on the map indicate stores with available food items. You can also swipe through stores at the bottom of the home page, which are listed in order from nearest to farthest from your location. The grocery stores list food items they have up for sale, showing its original value, discounted price and its best before date. Choose your food item and pay in the app, then pick up your order at the grocery store from the Flashfood zone. 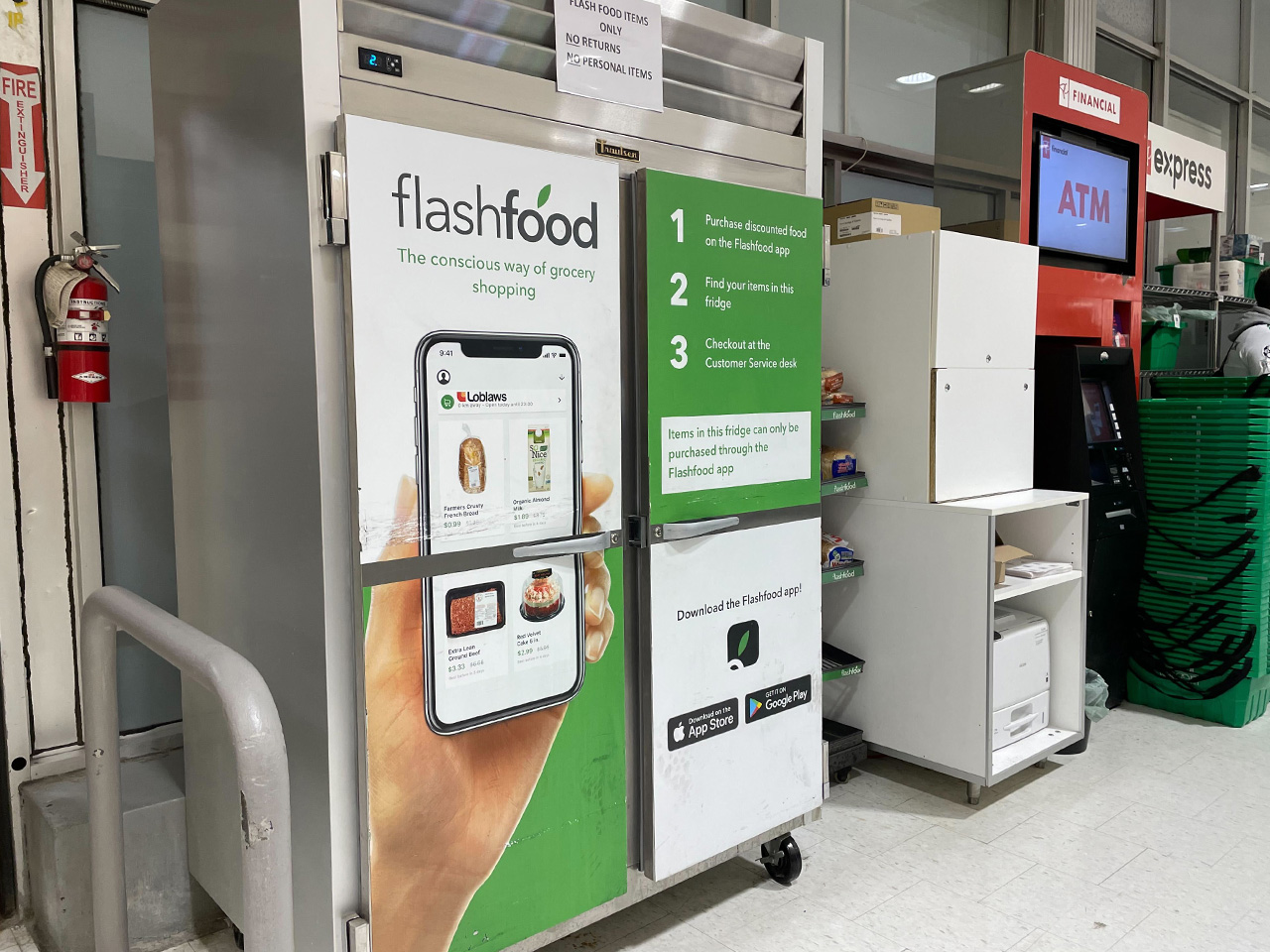 The closest grocery store with discounted food was a Loblaws about 3 km away from me. They had two mixed produce boxes on sale and the rest of the items were loaves of bread. I wanted to get the most bang for my buck, so I chose a mixed produce box. For only $4.50, I got a box filled with a bountiful harvest of apples (enough to use in multiples of our sweet and savoury apple recipes!), a package of potatoes and a banana. The pick up process was smooth. Once I paid for the produce on the app, it gave me the store’s hours of operation and the last day for pick up. I arrived at Loblaws and went to customer service and they directed me to a giant Flashfood designated fridge that stored my box. Everything was fresh—the banana was just beginning to yellow and the apples and potatoes were firm. 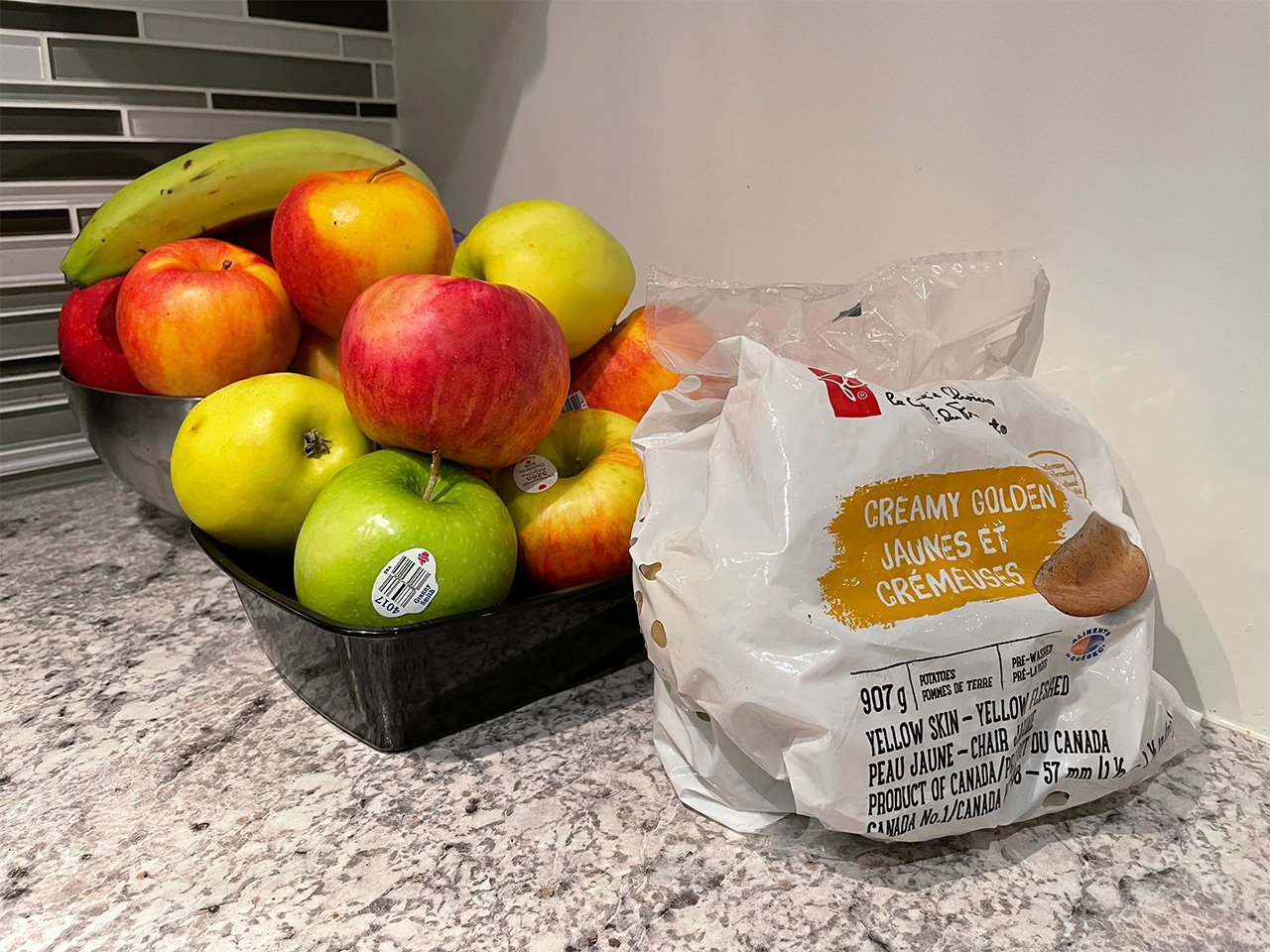 Overall, this app is great if you’re looking for discounts on specific food items because the stores will list and post photos of what’s available. One thing I noticed specifically in my neighbourhood is that it’s not heavily populated with participating grocery stores. Unfortunately, I haven’t seen any food items discounted at my nearest store, and there are only two stores within a 5 km radius of me that actively use the app. If you have access to a car or don’t mind a bit of a commute, this app will definitely shave money off of your monthly grocery bill.

Where: Participating Metro and IGA stores in Quebec and New Brunswick

Similarly to Flashfood, this app teams up with grocery stores to sell surplus food nearing its best before date. Download the free app and it’ll geo-locate the nearest participating supermarket. Browse through discounted items, which are conveniently separated into different food groups—fruits and veggies, meat and poultry, etc. The app provides a photo and a brief description of the item, including dietary restrictions. It also shows the discounted price, original price and best before date. Once you fill up your cart and check out, the app will let you know when your items are ready for pick up at the store.

I wasn’t able to try this app since there aren’t any participating stores in Toronto, but it looks promising for people living in Quebec and New Brunswick.