‘Sugar-Free’ Wine Is Here. So How Does It Taste?

Plus, a dietitian’s take. 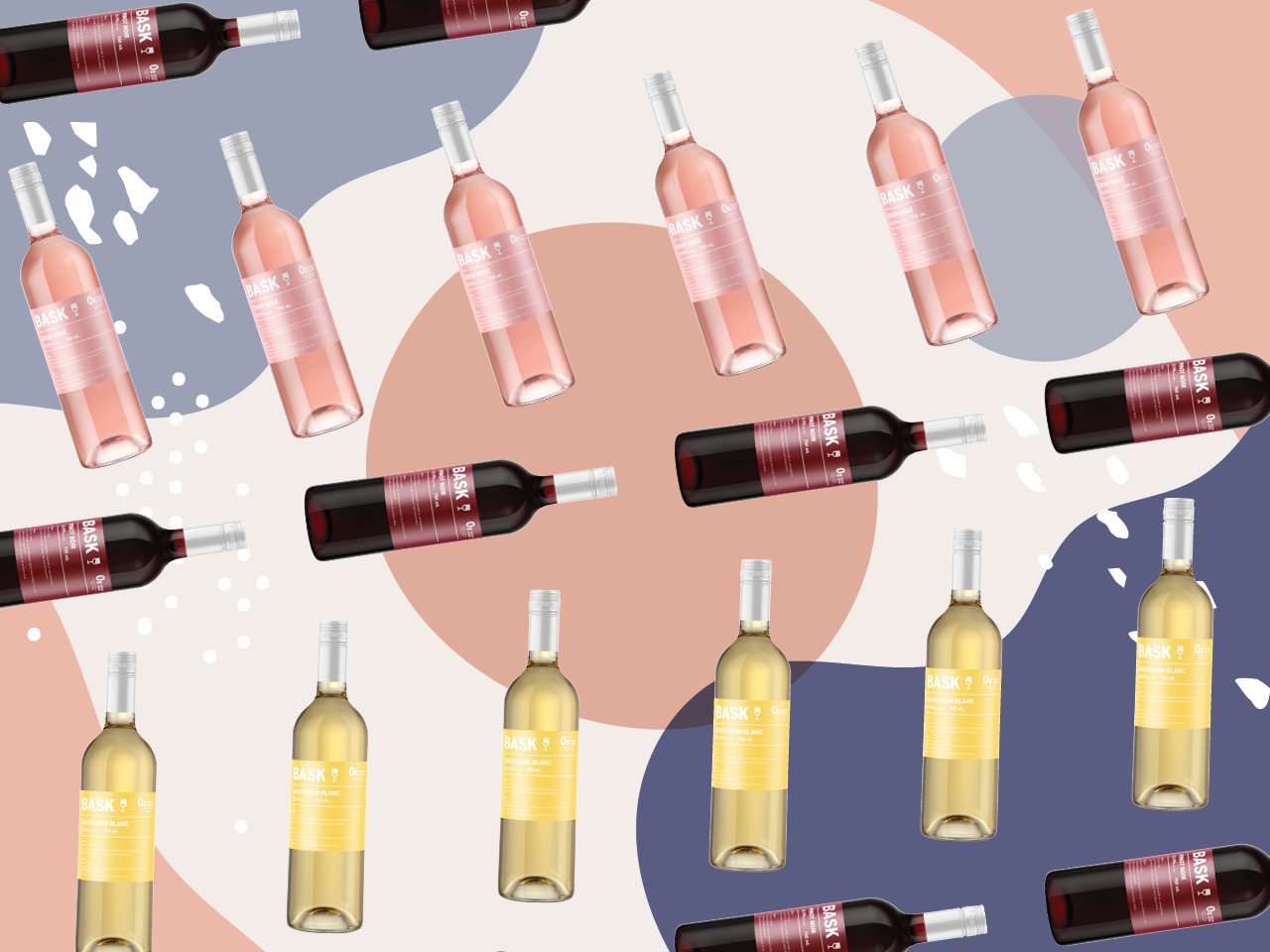 “Better-for-you” wines are a full-blown-trend in the United States which has seen both low-sugar wines like Cupcake Vineyards’ LightHearted label and “clean wines” such as Cameron Diaz’s Avaline, but we’re pretty sure BASK is the first of its kind in Canada.

BASK comes in three shades—red, white and pink—all of which boast zero grams of sugar per serving, raising a question most of us haven’t given much thought to, namely, “Just how much sugar is there in wine, normally?”

Do all wines contain sugar?

In a word, yes. All wine has a little bit of “residual sugar,” trace amounts that the yeast misses when it’s converting the sugar to alcohol. Even the “sugar-free” BASK wines contain a pinch—the pinot noir and sauvignon blanc each have about 4 g/L; the crisp rosé clocks in at just 2 g/l. But, since there are seven glasses of wine per litre, that’s less than a gram per glass—and that’s considered essentially zero in wine circles.

We went to a registered dietician, Lesley Seto, who has a practice in Halifax called Embodhi, to ask if this was something to celebrate. The less sugar, the better, right?

“You have to look at what, exactly, it is you’re drinking,” said Seto, “If you have a dry wine, for example, the amount of sugar in it is often quite low and you might find that the wine you’re used to drinking only has maybe six grams of sugar per litre in it anyway. So, if you’re only going for a drink with friends once a week, or once every two weeks, it wouldn’t really be a huge concern.”

If you’re drinking any of the standard dry wines, including, say, tempranillo, chianti, chardonnay or pinot grigio, to name a few, you’re probably already drinking something with less than 5 g/L of sugar that could be considered effectively “sugar-free.” And, quite a few pinot noir and sauvignon blancs are also under 5 g/l—some as low as 2 g/l. Since there’s no law requiring nutritional information on wine labels, though, few of us have any idea of the sugar levels.

“It kind of reminds me of things that are labelled as ‘gluten-free’ but are naturally gluten-free anyway,” said Seto. “That might confuse the consumers but, then again, it might pique some interest in people who are unaware about sugar or calorie intake in alcohol.”

Not really. With wine, some calories come from sugar, but most come from the alcohol itself.

There’s no such thing as low-calorie alcohol. The higher the percentage of alcohol, the more calories it has. There are formulas to calculate precise levels, but a simple rule of thumb is that an average strength wine (between 12 and 16 percent) has a calorie baseline (just from the alcohol) of about 100-135 calories per five-ounce glass. That’s before you add any sugar calories.

With a dry wine, the added sugar calories are negligible. If, however, you prefer sweeter wines, the extra calories from higher residual sugar levels could start to make a difference to total calorie count. Many off-dry rieslings and gewurztraminers hover around 20 g/L. There’s roughly 50 g/L in most mass-market lambruscos and, even a “dry” lambrusco will often be over 10 g/L, which is roughly similar to the sugar levels found in some, but not all, cava, crémant and champagne.

And then there’s new world rosé, which is often made in a sweeter style than it is in France. When winemakers want to make sweeter wines, they deliberately stop the fermentation process early, before the yeast is done eating the sugar. Where it’s stopped will make a big difference as to sweetness levels and it’s not at all uncommon to find an “off-dry” Canadian pink with sugar levels in the double digits and, a quick search of wines available in Ontario uncovered several in the low-thirties.

Still, at that level, we’re looking at an extra 20 calories per glass and four to five grams of carbs.

That’s a far cry from drinking back a sugary soda, which often contains 100 grams of sugar in a litre. So, the upshot here is that if you’re drinking a glass of wine per day, even a sweet one won’t blow your carb or calorie allowance. (Seto warns, however, that she considers the low-risk drinking guidelines in Canada too generous and warns that a glass a day is likely too much for optimal health.)

How can you figure out how much sugar is in your wine?

Because there are no mandatory nutrition labels on alcohol in North America, this isn’t as easy as it should be. That’s part of the appeal of wines like BASK, which are voluntarily printing sugar levels on the label.

“It’s very hard for the consumer to understand exactly what is and what isn’t in a wine or a canned cocktail,” said Seto. “So, if it says sugar-free, well, a lot of people rely on that.”

There are ways of finding out, though. Ontario’s LCBO, the SAQ in Quebec, and Alberta’s Liquor Connect list sugar levels online (for wine, not spirits). Sadly, nobody else in Canada does. You don’t have to live in one of those provinces to use their sites though, and since they both stock a massive number of labels, there’s a decent chance the wine you’re thinking of buying in Saskatchewan is listed.

If that fails, try writing the winery to ask for the technical data or “tech sheet.” Many will oblige. So before you write off your favourite pinot, check to see what its sugar levels are, since there’s an excellent chance it’s comparable.

Since rosé can run quite sweet, and the BASK Crisp Rosé (2 g/l) is quite low in sugar, it’s probably the one that makes the most sense to look to if you’re really trying to monitor sugar levels. It’s also probably the most full-flavoured of the three BASK wines. Often with rosé wines, you expect berries, watermelon, citrus and floral notes and this wine has all of that—on steroids—but without any residual sweetness.

To my taste, BASK pinot noir is a little light, one dimensional and fruit-forward. The sauvignon blanc, with its light body, fresh citrus, cantaloupe and stone fruit is the one I’d pick first if these were the three options for house wine at a bar. I wouldn’t choose it because it was “sugar-free,” though, since there are plenty of options for sauvignon blanc and pinot noir with the same (or lower) sugar levels.

So what’s the takeaway? If you like the BASK wines, well, they’re certainly budget-friendly (see below) and you can be sure you won’t blow one-third of your daily sugar allowance on a second glass of vino.

But we’ll give Lesley Seto the last word here: “If you’re drinking enough for the sugar to make a difference in your diet, the sugar is probably the least of your concerns.”

Where can I buy them—and how much?

BASK is currently available at BCLiquor; private retailers in British Columbia and Alberta; the LCBO, Wine Rack and grocery stores in Ontario and in Newfoundland at the NLLC. Prices range between $11.99 and $13.98, depending on the province.