I recently set out to make the most complicated meal in my culinary adventures. I would be lying if I claimed it was extravagant, but it certainly was a challenge. 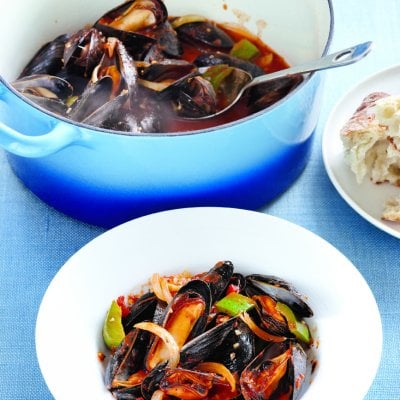 A few weeks ago, I set out to make the most complicated meal in my culinary adventures so far. I would be lying if I claimed it was extravagant, but it certainly was a challenge – my first time cooking three courses all at once–ish. And since I’m traditionally a potluck kind of host (a.k.a. dish delegater), a hungry guest list of seven was a definite feat.

The eaters: My family mostly, plus my roommates and my boyfriend.

For the first course I chose to cook mussels because I’d been told that it would be a reasonably easy undertaking, and because I love them. They are also quite inexpensive, and since I was trying to stick to a $100 budget (including the scotch), it seemed like the best bet. And it turned out that this was my biggest success. Besides the de-bearding, the dish was super simple yet looked impressive – I got some oohs and aahs when I lifted the lid – and it was the perfect appetizer along with a nice loaf of bread.

My second dish was a bust. I made the secretly creamy pesto pasta, and although my guests were kind and supportive, I would describe my results as dry and not creamy. There are two possible reasons that things went wrong: One, I added some slightly overcooked sliced chicken breast to try and meat up the dish, and two, I doubled the recipe without being cautious about measuring. Though, the truth is I just preferred the taste of the pesto before I added the tofu, but I will keep that in mind for next time.

The dessert was a big winner – who doesn’t like chocolate and cheesecake? Plus the whole marbled effect was extra professional, and once again my guests were impressed. The one hiccup was a slightly undercooked brownie centre, so next time I make these delicious brownies, I will try and leave the pan in the oven for a few extra minutes. I also chose dark chocolate chips so that I could add more without making the dish too sweet.