Lemon juice or vinegar: Which is more acidic?

While developing our 10-minute ricotta, we investigated the cause and effect of these two acids; plus enjoy this creamy cheese in four of our favourite recipes 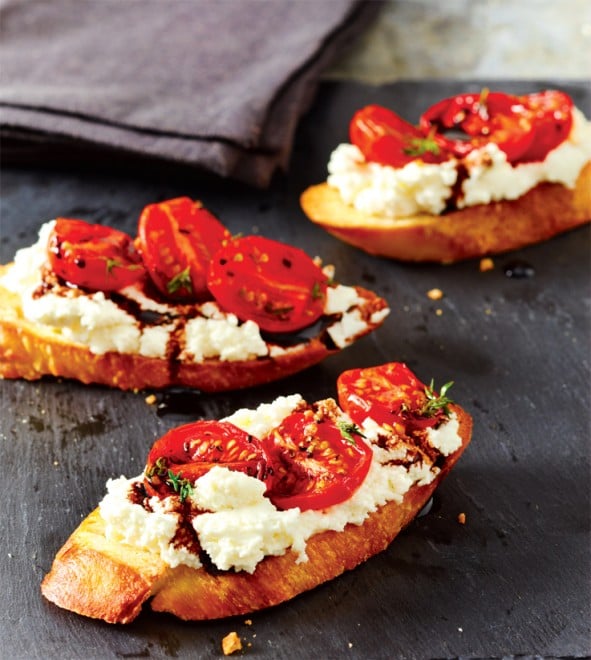 While developing our creamy 10-minute ricotta story for the March issue was a lot of fun, we also learned a lot from the process. Making ricotta is very simple and straightforward, as long as you have precisely the right ingredients. And, once you’ve made ricotta at home, you’ll never again want to purchase it at the grocery store — the homemade version is that good.

What is ricotta?
Ricotta is an unripened cheese produced by heating milk and separating milk solids from whey through a process called coagulation. Coagulation occurs when proteins, in this case the milk solids, are exposed to increasing heat, and an acid is introduced. Once coagulation occurs in the milk, the solids shrink and become firmer, forming white particles which separate themselves from the yellowish cloudy liquid — the whey.

What did we learn?
The Chatelaine Kitchen tested our creamy ricotta recipe several times and learned that all acids are not interchangeable. The amount and type of acid used is crucial to a creamy, smooth and delicious ricotta. Different acids can be used when making ricotta and some methods call for vinegar (this can be a wide range, too) and others, lemon juice. We tested with white vinegar and lemon juice and found lemon juice created a creamier, smoother, better tasting ricotta. Our testing showed that vinegar produces a firmer, slightly tougher product. The general rule of substitution for lemon juice is to use half the amount of vinegar. Although when we tested the recipe with half the amount of vinegar, the results still paled in comparison to those of the lemon juice. The Chatelaine Kitchen is part lab, part kitchen, so we had to investigate why two similar acids would react so differently.

What’s the difference between lemon juice and vinegar?
The most significant difference between lemon juice and vinegar is the type of acid. Lemon juice is on average five to six percent citric acid. Vinegar, on the other hand, is comprised of acetic acid. In terms of percentage, it depends on the vinegar. White vinegar tends to have seven percent acetic acid, which is a higher level than other vinegars. Slightly milder vinegars, such as balsamic and red wine vinegar, have about six percent, and a relatively mild rice wine vinegar is around four and a half percent (none of which you would use for ricotta). In terms of PH, vinegar is slightly more acidic than lemon juice.

Since acidity is a catalyst in coagulation, we can only assume that this slightly higher acidity level in vinegar caused our proteins (milk solids) to become firmer, tougher and drier. There is also the possibility that different acids (acetic vs. citric) react in different ways to the milk. Finally, we can’t overlook the impact of flavour. The lemon juice seemed to produce a lovely, mellow, delicate flavour.

Four ways to use ricotta:
As I mentioned, once you try our homemade ricotta, you won’t want to go back to the packaged variety. Homemade ricotta will last in the refrigerator for a week, so make the most of it and try some of these recipes: Roasted tomato crostini, Butter-chicken pizza, Ricotta and lemon eggplant involtini, Ricotta oat bran pancakes with maple raspberry sauce

FILED UNDER: In the Kitchen ricotta vinegar