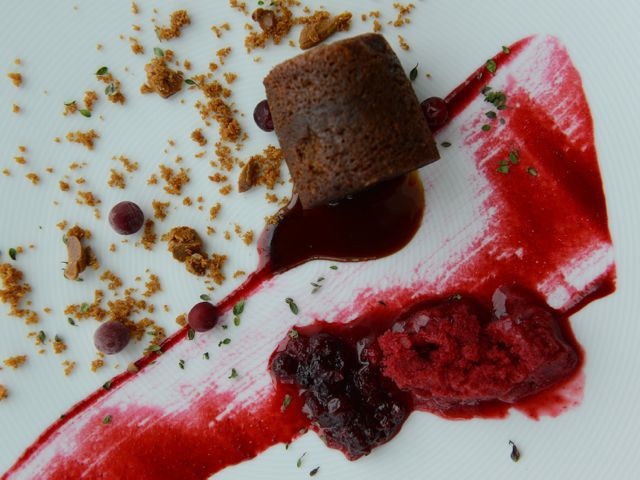 Each year enRoute magazine, the snappy inflight mag on Air Canada flights, releases its list of Canada’s best new restaurants in the November Food Issue. It’s a hotly anticipated – and often much debated – feature, but if anything, it gives frequent fliers a good base for where to eat in cities and towns across this delicious country.

Little known fact about me – I started the Best New Restaurants feature over a decade ago as enRoute’s inaugural restaurant critic. After two summers of eating across Canada I hung up my fork and knife and moved up to a new jean size!

I’m still one of the many panelists giving my opinion, and ate with this year’s eager eater, Andrew Braithwaite when he was in town for his Toronto pit-stop.

Air Canada’s enRoute is pleased to announce the Top 10 list of Canada’s Best New Restaurants 2013, and the inaugural winner of the People’s Choice Award. On a month-long culinary odyssey that took noted food writer Andrew Braithwaite from Vancouver Island to Fogo Island, he discovered a bumper crop of adventurous chefs who continued to redefine what it means to dine out in Canada.

The Top 10 restaurants in order are:

1. Bar Isabel, Toronto: “looks, feels and tastes vaguely Castilian but does far more than ape a menu straight out of Madrid.”

2. Shoto, Toronto: “a storybook of a tasting menu, with all the typical annoying bits – the repetition of ingredients, the showy caprice, the monotonous pacing – smartly edited out.”

3. Fogo Island Inn, Joe Batt’s Arm, Nfld. and Labrador: “There’s a terrific survivalist spirit bursting out of Chef McDonald’s kitchen, where most everything is made from scratch.”

4. Supply and Demand, Ottawa: “ It’s not supposed to be this easy for a first-timer … you notice all the little things that rookies Steve and Jennifer Wall are getting so right.”

5. Pidgin, Vancouver: “The cuisine of Winnipeg-born Chef Ono, who ran restaurants in Beijing and Hong Kong, draws from multiple languages.”

6. Carino Japanese Bistro, Calgary: “a Japanese-Italian wine bar that defies logic in the most wonderful ways.”

7. Maison Publique, Montreal: “A mere 250 years after the Treaty of Paris, cooking Anglo food in Montreal is cool again.”

9. The Acorn, Vancouver: “That the food is meatless is almost beside the point unless you’re a foodie vegetarian who’s long hankered for a compromise-free night on the town.”

10. Electric Mud, Toronto: “Electric Mud is a twisted hymn to the American South.”

Voted by the people, for the people
In partnership with lead sponsor, Jaguar Land Rover – one of the world’s premier manufacturers of luxury vehicles – Air Canada’s enRoute encouraged Canadians to select their favourite restaurant on eatandvote.com. Vij’s Railway Express – a mobile restaurant inspired by an Indian rail carriage with a menu that explores regional flavours and dishes of India – receives the inaugural People’s Choice Award as Canada’s favourite new restaurant. The contest offered a chance to vote to win a trip for two to the 2013 Canada’s Best New Restaurants gala event in Toronto, with the use of a vehicle.