The fresh blueberries do scream ‘summer’ (although they’re easy to get year round) but because the clafoutis is served warm, it pairs well with dinner served on a cold and rainy fall evening 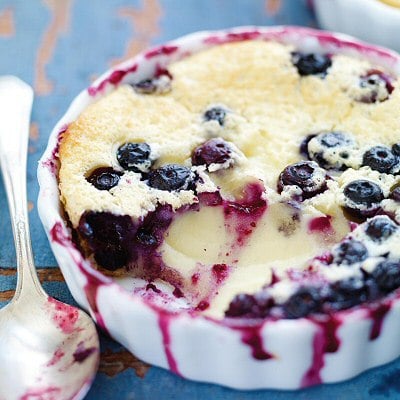 With the in-laws in town our dining table has become pleasantly packed, which is a perfect excuse to kick the cooking up a notch. (Also, a perfect excuse to serve dessert nightly!) So I scoured the Chatelaine recipe lists and found a great dessert to complement our dinner – blueberry clafoutis.

Pronounced ‘kla-foo-tee’, this French dessert (traditionally made with cherries) is part soufflé, part custard. The fresh blueberries do scream ‘summer’ (although they’re easy to get year round) but because the clafoutis is served warm, it pairs well with dinner served on a cold and rainy fall evening. This dessert can be made in individual ramekins or in a 9-inch glass pie plate (which is what I used). You first brush the inside of the dish(es) with butter, then sprinkle granulated sugar to coat. Then you scatter the blueberries in the dish (or divide the cup amongst the ramekins), and make the ‘batter.’

Now I expected the batter to look more like a cake or pancake batter…but it was significantly runnier than that. It’s made with a combo of whisked eggs, whipping cream, milk, sifted flour (I used whole wheat because it was all I had – seemed to work just fine), sugar, and a teaspoon of orange liqueur. The finished product had more a smoothie consistency than a batter one, but undeterred I poured it over the blueberries as per the recipe and put it in a 400 degree oven.

Twenty minutes later I checked it, followed the directions to put foil over the top of the dish (to prevent over-browning), and cooked it a tad longer (needs to be ‘jiggly, but set). I put it back in for 10 minutes, but should have perhaps taken it out after five. It wasn’t overcooked, per se, but it wasn’t as soft or pudding-like through the centre as I think a traditional clafoutis is. Having said that, it was DELICIOUS. I dusted the top of each serving with icing sugar, and put it on the table nice and warm from the oven. It garnered rave reviews from the crowd, including mini sous chef, and we all felt it could double as a sweet brunch dish. Also, it was incredibly easy to make: less than 10 minutes to prep, and it baked while we ate dinner. Magnifique!