The future of hockey is female, so why aren't women paid to play?

The US women's hockey team is threatening to boycott the world championships if they're not paid fairly. Their fight reveals a deeper issue: female athletes still aren't taken seriously. 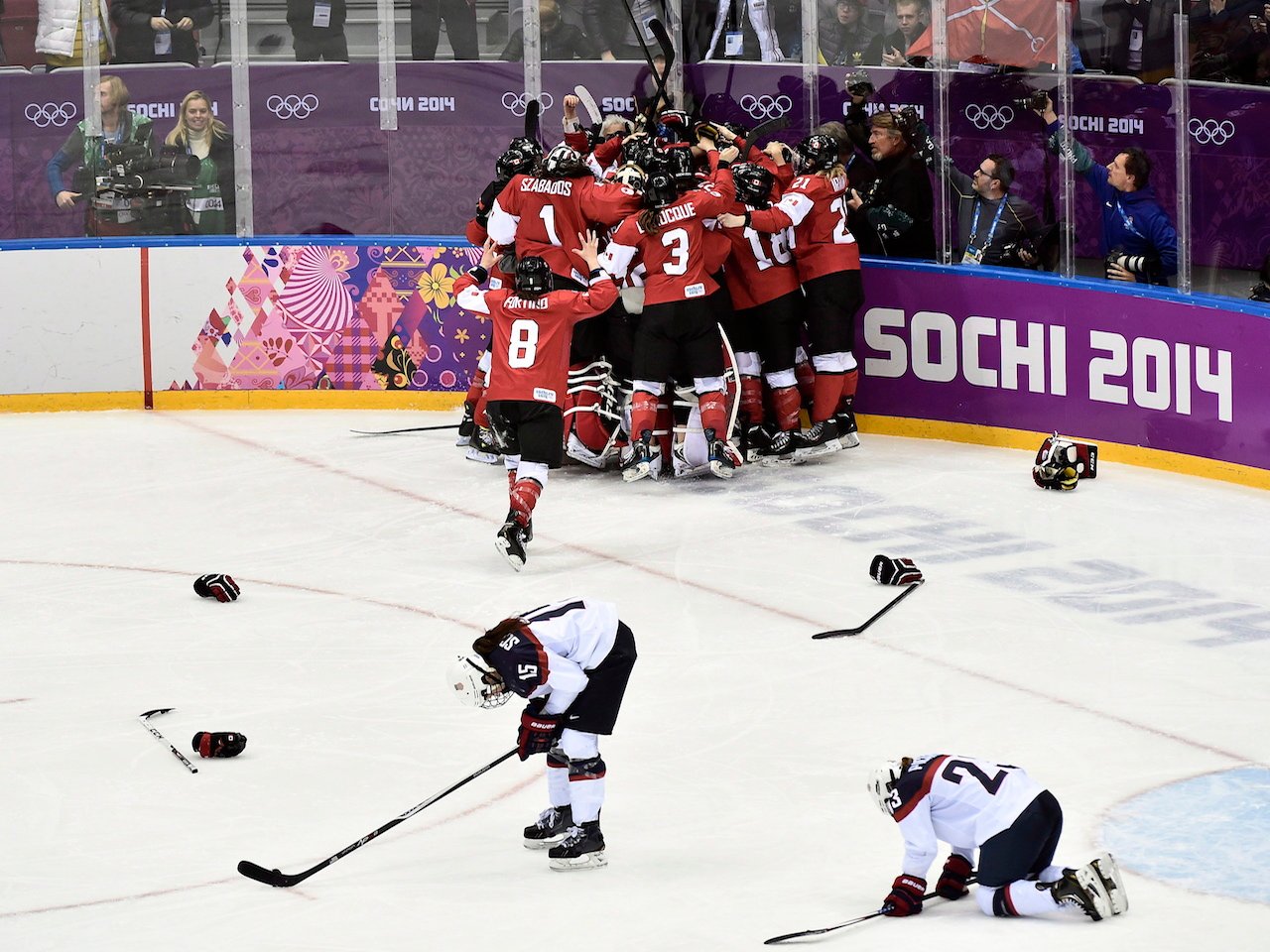 The Canadian women’s hockey team celebrates after Marie-Philip Poulin scored the gold-winning goal against the United States during sudden death over-time at the 2014 Sochi Winter Olympics in Sochi. Photo, The Canadian Press/Nathan Denette.

A brother and sister grew up in Wisconsin, equally in love with hockey. Both were encouraged and supported by their parents. From childhood, both devoted their early mornings, nights and weekends to endless shooting drills, skating lessons and dry land training. By the time they became teenagers, both were ranked among the best young players in the US. Both have represented their country at the Olympics and each has won a silver medal. Both currently play professional hockey.

Here’s where the fortunes of Phil and Amanda Kessel diverge: Phil, a Pittsburgh Penguin and former Toronto Maple Leaf, earns about $9 million a year, putting him near the top of the NHL pay scale. Amanda received the largest contract to date when she signed as a free agent to the NWHL’s New York Riveters last year. Her annual salary to play in the four-team women’s league? $26,000.

This doesn’t so much illustrate a pay gap as it does a canyon, an inequality that’s been highlighted by the ongoing labour negotiations between USA Hockey and the US Women’s National Hockey team (Amanda Kessel is also a forward on the national team). The players will boycott the upcoming world championships at the end of this month unless their demands are met: a $68,000 annual salary, plus childcare and maternity leave, as well as a national youth development program for girls. USA Hockey spends about $3.5 million a year on programs for boys, but has nothing similar for girls. In a public statement, team captain Meghan Duggan said, “We have represented our country with dignity and deserve to be treated with fairness and respect.” The team’s stand comes after a similar fight for equal pay was launched by the US women’s soccer team last year.

Currently, the US women’s hockey team — which has won six world championships and silver medals at the 2010 and 2014 Olympics — gets next to nothing. Players earn $1,000 a month for six months leading up to the Olympics, and they only play about nine games a year during non-Olympic years. Canadian women fare slightly better; players on the national team receive $1,500 per month in non-Olympic years and full-time support for nine months during Olympic years. 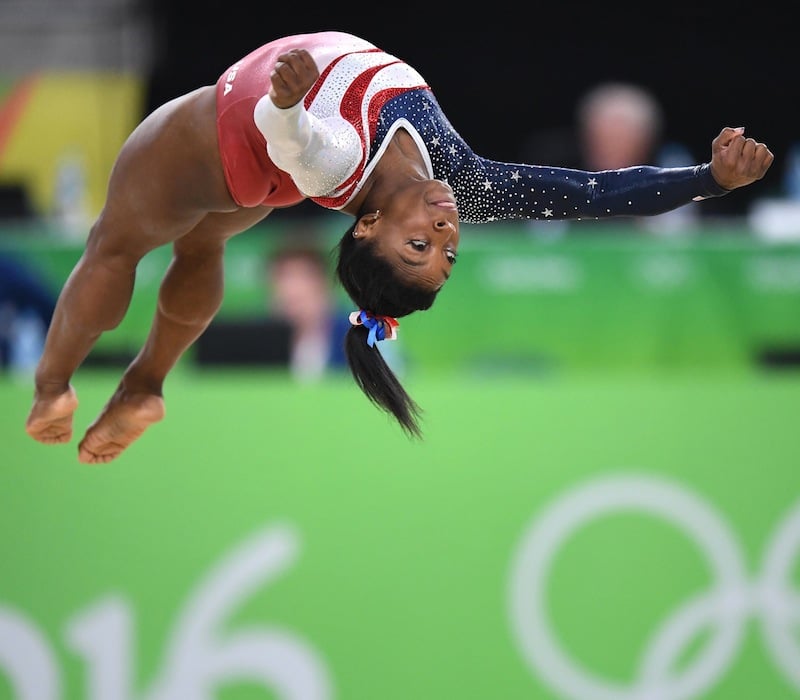 Investing in women’s hockey would be so easy and so smart — not just as a goodwill gesture but good for the sport as whole. Among kids, even here in Canada, hockey is struggling to survive. Unlike basketball and soccer, which require little more than a ball and plot of grass or asphalt, hockey is expensive, demanding and time-consuming; just learning to skate decently can take years. Fears of concussions have also led to declining enrollment in recreational leagues.

Girls are an untapped pool of potential players who could reinvigorate the sport. There’s all kinds of evidence showing that girls who play team sports are physically and psychologically healthier, have higher self-esteem and better grades, and are more likely to go into male-dominated professions like science and technology. Team sports teach cooperation, grit, resilience, and competitiveness — what more practical way to inspire and empower young women to feel confident and strong?

If USA Hockey won’t support women athletes, then another body, like the NHL, should. The Toronto Maple Leafs just joined with the White Ribbon Campaign to have the team’s high-profile players raise awareness about domestic violence and gender inequality. Wouldn’t it also be terrific for NHL teams and players to challenge gender inequality in their own sport by speaking out for equal pay and by investing in development programs for girls?

The main case against supporting women’s hockey is that the sport doesn’t draw the same crowds and sponsors that the men’s league does. But that’s an absurd, self-fulfilling argument. In order for the sport to grow, its players need more training, more ice time, more competition, more media coverage and more pay. Even without these basic benefits, female players have done an extraordinary job in showcasing hockey. Anyone who thinks the women’s sport lacks drama, excitement, heartbreak and ecstasy should watch the nail-biting gold medal match between Canada and the US in Sochi in 2014. It’s widely hailed as one of the best games of hockey ever played, with Canada winning in overtime.

The two professional women’s leagues, the Canadian Women’s Hockey League and the National Women’s Hockey League, are hoping that with time and effort, they can consistently generate as much buzz and attention as that Sochi showdown. At the moment, though, the CWHL can’t pay its players and the NWHL had to cut its salaries — which ranged from $10,000 to $26,000 — by 38 percent in November. These phenomenally talented women have spent a lifetime honing their skills and essentially work for free. As the badass Billie Jean King put it, “Being a world class athlete should not be treated as a part time job.”

The battle for fair pay by the US women’s hockey team is a defining one for the sport. Will female athletes — and by extension the ambitions and dreams of all girls and women — be taken seriously or not? Earlier this month, a friend of mine posted a picture on social media of his young daughter in her hockey jersey, heading onto the rink with her ponytail pulled tight under her helmet. His caption read: “Happy International Women’s Day!” My friend’s hockey dad pride felt both endearing and bittersweet. No matter how good his daughter is and no matter how hard she works, for now at least, the glass ceiling over her head remains as unbreakable as the ice below her skates.

Since this piece was published the US women’s hockey team has secured monthly stipends between $2,000 and $4,000, plus travel benefits and insurance equivalent to the men’s team. They also fought to form a Women’s High Performance Advisory Group, made up of current and former players who will advise on how to grow the sport for females.

More:
Sophie and Justin’s yearning to be relatable makes them seem out of touch
23 ways you can use an avocado, from breakfast to dessert
‘I don’t own a scale. I don’t believe in those things.’ Misty Copeland on getting a Ballerina Body