The Future Is Greener Than You Think

It’s easy to despair about the state of the planet. But after years of reporting on the environment, I’m more optimistic than ever. 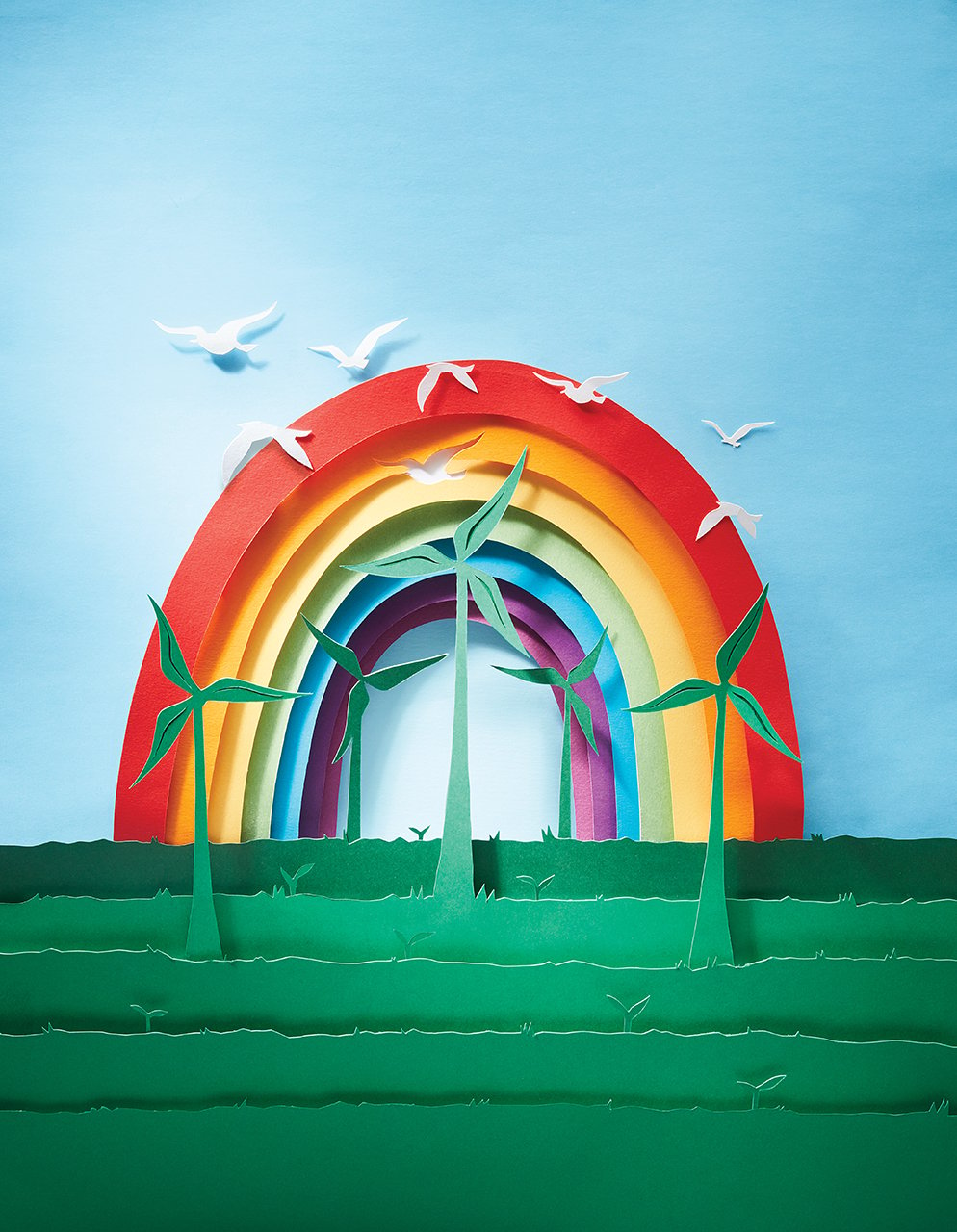 To catch a glimpse of our brightest future, I travelled to the small Danish island of Bornholm. It was the summer of 2013, and for years I had been hunting out new and emerging climate change solutions. Climate change had long been a focus of my writing, but after the birth of my first child in 2005, I decided to report exclusively on the tools being forged to overcome the problem—the world’s best experiments in clean power and green living, little oases of hope on a darkening planet. I knew the world my kids would inherit would by necessity operate very differently from the one I’d grown up in, and I wanted to see the tools they would need to thrive in it. And on Bornholm, perhaps more than anywhere else on earth, all those small slivers of a better future had been assembled into something close to a coherent whole.

Bornholm was a test site for an energy pilot project that brought together the best minds and latest technology from the Danish Energy Agency, the Technical University of Denmark, Siemens and IBM. The majority of the island’s power already came from the wind, and 1,900 homes and businesses were now strung together by a smart electricity grid that allowed household appliances to talk to the grid and make better decisions about when to do their refrigerating and heating and washing to maximize efficiency and minimize the cost of the power used in doing so. There was also a fleet of electric vehicles deployed across the island by the local government to determine their ability to serve as a widely distributed battery packs for the wind energy generated from unpredictable Baltic Sea breezes.

Here was a vision for 21st-century living at least as inviting as the one that had enticed so many millions of us since the middle of the 20th century to live in single-family homes with two-car garages on wide, curving streets. Imagine your electric car parked next to your solar-panelled house, fuelling up at night, when demand is low and prices are cheap. Imagine driving to work, plugging the car’s battery pack back into the grid and brokering the sale of any power you don’t need at a profit as demand rises during the day. Imagine an enviable quality of life, all without a single molecule of carbon dioxide sent skyward to compound the global catastrophe of climate change.

I didn’t have to imagine it anymore. It was all there on Bornholm. I spent the day touring the island in a rental electric car, checking out solar-roofed homes and wind turbines and charging stations. In truth, though, you could barely see how revolutionary it all was. Tidy Danish life went on mostly as before. A brighter, emissions-free future was upon us, seamlessly integrated into the world as it already was.

The trouble, of course, is that Bornholm remains a bit of an oasis, even within green-minded Denmark. And Denmark, with its steadily shrinking emissions, remains very much an anomaly in a world that’s still as dependent on fossil fuels as it was that day in 2013. The crisis already seemed imminent then—a massive, looming worry. It is fully manifest now—a mounting catastrophe whose contours are being mapped in the news almost daily, with pounding hurricanes and ferocious wildfires, and whose scale is being charted in the grim reports of climate scientists noting the steady rise in carbon dioxide from our global fossil fuel addiction and the shrinking time horizon in which to change course.

The good news stories are rarely as dramatic as raging wildfires or as noisy as street protests. But that doesn’t make the work any less important or any less powerful in its potential impact.

We should have acted with real resolve 20 years ago. We should have done so much more. We will lose species, maybe whole ecosystems. Millions will lose their homes and livelihoods and even lives before anything like a stable climate re-emerges. As a parent, I am acutely aware that far too much of the full cost of this deepening crisis will be borne by my children and grandchildren. The news is varying degrees of bad, and it is only getting worse. It’s too easy to despair.

Yet I remain firmly an optimist, not because I am unaware of the urgency of the problem but because I’m equally intimate with a brighter story. It’s the story I’ve been telling in pieces since I started searching for solutions, and my optimism has only grown because those solutions have become faster, cheaper, more common and more effective in the years since.

Stories I used to find on the fringe—stories about renewable energy and emissions-free travel and cities built to the scale of bikes and pedestrians instead of cars—are now mainstream stories in the daily news. The typical cost of wind power in the United States has plummeted by two-thirds in just the past 10 years, and the cost of solar power has gone into giddy free fall over the same period, dropping by as much as 88 percent in some places and making solar power by far the world’s fastest growing source of new energy. In 2017, China hooked up 10 times more new solar power to its grid than existed everywhere on earth in 2005. Chinese investment in renewable energy now exceeds $100 billion per year. Tesla Inc., which didn’t exist in the fall of 2000 when I filed my first story about electric vehicles, makes in excess of 5,000 of its fully electric and wildly desirable Model 3 cars every week. (There’s even a Tesla dealer at my local mall in Calgary.) There are also more transit and bike lanes than ever before in my city. In British Columbia, more than half of all First Nations are either at work on or interested in pursuing a local renewable-energy project; Indigenous communities across the country are similarly engaged.

This whole clean-energy push is still in its infancy, and it’s accelerating, spreading with a quickness and resolve that even boosters thought was much further in our future back when I started talking to them more than a decade ago. You sometimes hear from understandably anguished activists that we spent a generation doing nothing about climate change. That’s a straight-up lie and an insult to the engineers and inventors and urban planners and policy wonks who have spent the past decade and more building, testing and refining the tools we’ll use to overcome the climate crisis. I’ve encountered no reason to doubt that the next decade will see a more rapid and widespread deployment of more and better green technologies than the last.

These good news stories are rarely as dramatic as raging wildfires or as noisy as street protests. Beyond the Tesla roadsters and carbon-free Danish oases, the green future is half-hidden, politically messy and wonky as hell. But that doesn’t make the work any less important or any less powerful in its potential impact.

The tedious and sometimes bewildering day-to-day grind of municipal governments, for example, can be a treasure trove of climate solutions. Consider this: Last year, the municipal government of Berkeley, Calif., published a report on what it could do to shrink the city’s carbon footprint by the largest amount between now and 2030. The eye-catching stuff was in there—renewable power and electric vehicles, for example. But by far the largest reduction—more than four times the size promised by encouraging electric car use—could be achieved by changing municipal regulations to encourage denser infill construction. The biggest step that the city could take would be simply to encourage more people to live in urban environments like the ones most city dwellers lived in before the car took over.

In broader urban-planning circles, meanwhile, a hot topic is the elimination of mandatory parking minimums—the kind of thing that couldn’t seem less significant at first glance. But this simple bureaucratic step can radically change the way our urban environments function, freeing up space for bikes, pedestrians and transit. Montreal is the latest municipality to adopt this strategy, joining cities like San Francisco, Minneapolis and Buffalo. Valérie Plante, the dynamic mayor of Montreal, added this move to a string of climate-friendly initiatives she’s enacted since being elected in 2017, from banning traffic on Mount Royal in a pilot project to committing the city to carbon neutrality by 2050.

Zoning and bylaws, parking and density—this isn’t very many people’s idea of pulse-quickening future-tense spectacle. And the answers can seem ridiculously out of proportion to the scale of the climate crisis. Energy efficiency is another whole world of simple, unsexy climate-saving tools: Canada could achieve a third of the emissions target it committed to at the Paris climate summit simply by fully implementing the efficiency measures that the provinces and territories have already pledged to pursue. But it could be a big deal for the planet’s bottom line. It’s already helping to draw a clear dividing line between hope and despair.

I know which side of that line I’m happiest to stand on.

Chris Turner has written several books on sustainability, including The Patch: The People, Pipelines, and Politics of the Oil Sands.