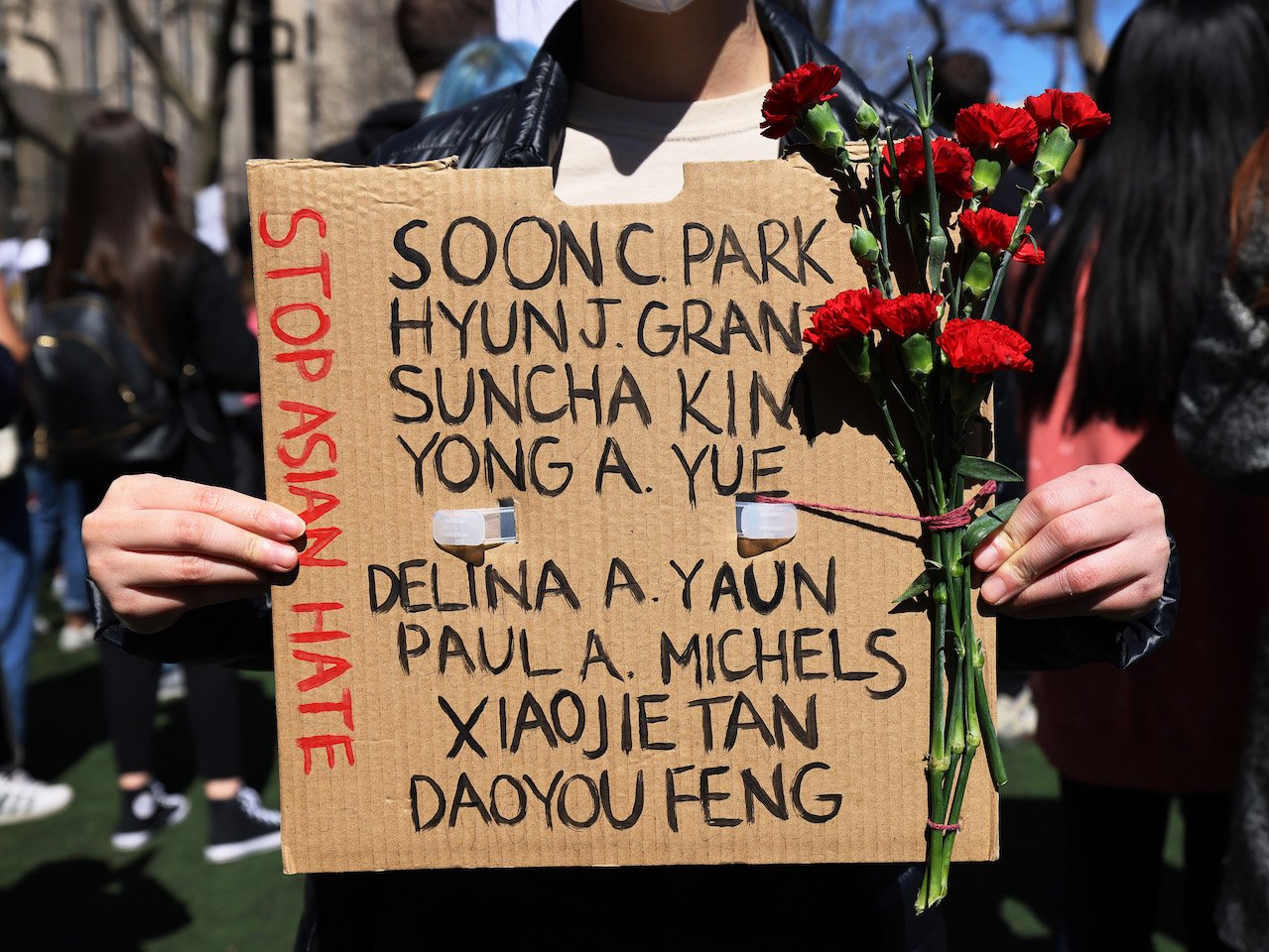 A woman holds a sign bearing the names of the women and man killed in Atlanta last week, at a rally against hate in New York. (Photo: Michael M. Santiago/Getty Images)

On March 17, Asian workers who work in massage parlours and spas woke up to a terribly familiar refrain: spas had once again been targeted by a violent misogynistic attacker. This time however, the loss of life was almost unimaginable: Eight dead, six of them Asian women, with one survivor fighting for his life after being shot in the forehead, lungs and stomach.

The Atlanta spa shootings come amidst a massive increase in anti-Asian racism. The non-profit Stop AAPI Hate recorded nearly 3,800 racist incidents against Asians in the U.S. during this past year, the majority against Asian women. Parallel trends have been observed in Canada, as more than 1,000 cases of anti-Asian racism have been reported here by community organizations in the past 12 months. Canada actually has more anti-Asian racism reports per capita than the United States.

Much of the mainstream media coverage has focused on the suspected killer and his potential motivations, such as fetishization of Asian women as “sexual temptations,” white supremacy, incel ideology and evangelical “purity culture.” However, what has been glaringly missing from the conversation is the role that anti-sex work and anti-migrant laws, policing and discourse has played in allowing this kind of violence to occur regularly in massage spas (which provide spa services like manicures and massages and, sometimes, sexual services) long before the most recent rise in anti-Asian sentiment.

Some commentators have insisted that the Atlanta victims not be conflated with sex workers, as it is unclear whether or not they offered sexual services. This distinction however, misses the point. All massage workers deserve rights and protections, regardless of whether they offer sexual services. Further, as Yves Tong Nguyen of Red Canary Song, a New York City-based collective of Asian and migrant sex workers, reminds us: “whether or not they are sex workers, they were harmed by the criminalization of sex work.” And as police presence rises in Asian neighbourhoods as a result of last week’s shootings—ostensibly to protect against similar attacks—many massage workers will likely feel even less safe.

There have been reports that two of the spas where the Atlanta victims worked had been the subject of police anti-sex work stings in the past. Under the Georgia Code, the selling of sexual services as well as sheltering sex workers are criminal offences. These laws and investigations are supposed to protect the women working at these businesses, but instead make workers’ lives less safe. For example, it would have been illegal for the Atlanta workers to clearly communicate if they indeed offered sexual services—and if they did, what specific services they did and did not offer. It also would have been illegal for the Atlanta workers to share information with other sex workers about aggressive clients in order to enhance collective safety.

“We want to feed ourselves by our hard work,” says Lisa, a massage worker in Toronto. “However, we always have faced harassment from the police and bylaw enforcement.” Indeed, for two decades, interests opposed to migration and sex work, often Christian evangelical anti-trafficking organizations, have framed Asian massage workers as the victims of sex trafficking, terrorism, criminal gangs—as anything but workers. These interests have promoted a significant expansion in law enforcement power over the lives of Asian women working in massage businesses, justifying criminalization, surveillance, raids and deportations.

But repressive immigration, criminal and municipal laws do not protect racialized massage workers. In the name of “protection” these laws grant law enforcement officers carte blanche to surveil, ticket, harass and arrest. For example, all migrants, including those legally authorized to work in Canada, are prohibited from engaging in even legal forms of sex work, including stripping. Profiling and harassment at the hands of law enforcement is continually a primary source of insecurity for Asian massage workers. In a 2018 survey of Asian migrant massage and holistic centre workers in Toronto, 65 percent of respondents expressed that one of their main concerns was inspections and raids. More than one-third reported that they had been abused or harassed by bylaw enforcement or police officers.

Red Canary Song was formed directly in the aftermath of the death of 38-year-old Yang Song during an NYPD raid. Song had previously been pressured to act as a police informant against her fellow massage workers after being arrested and charged with prostitution herself. Clearly, more law enforcement and criminalization—such as what we’re seeing in the aftermath of the Atlanta shootings, when the NYPD sent counterterrorism units to Asian neighbourhoods; or in Canada, where the terrorism charges against a 17-year-old who killed a Toronto massage worker could potentially lead to increased surveillance of the industry—cannot be the answer.

So what is the answer? Supporting greater human and labour rights for massage workers. For example, reforming immigration regulations and decriminalizing sex work allows migrants who work in the sex industry to do so without hiding from law enforcement, and also enables them to more effectively enforce their rights under employment standards, as well as occupational health and safety legislation and human rights legislation. This would help workers push back against wage theft and debt bondage, enforce their rights to freedom from discrimination, support consent and the right to refuse unsafe work and prevent coerced labour within the industry.

As it stands, women who choose sex work are often victimized by law enforcement as well as disbelieved and disregarded by anti-trafficking organizations, who typically see women who are forced into sex work as worthier victims. In this environment, police raids undertaken for the purposes of anti-trafficking can quickly transform into anti-sex worker, anti-migrant raids that result in the arrest, detention, prosecution and deportation of Asian women.

The over-regulation and criminalization of massage parlours is not about protection, but is rather about control over sexuality. Even among women, Asians are especially targeted because they are seen through stereotypes that frame them as too submissive to make their own decisions. Asian women are capable of choosing their work and of controlling their sexuality. Further, Asian massage worker communities have the wisdom and power to set their own terms, make their own decisions about their work and their sexualities and to protect themselves—but criminalization removes their ability to do so. Ultimately, they deserve what all workers are entitled to: the safety afforded by greater labour rights, migrant rights and social inclusion—not increased surveillance and policing.

Elene Lam is the founder and executive director of Butterfly (Asian and Migrant Sex Workers Support Network). Chanelle Gallant is an organizer in movements for sex workers rights and racial justice based in Toronto. Vincent Wong is a lawyer and PhD Student at Osgoode Hall Law School.