Did This Eyeshadow Joke About Sarah Huckabee Sanders Go Too Far?

Every year, the White House Correspondents Dinner provides a rare opportunity for  the American administration and the journalists who cover it to put aside whatever animosity exists between them for one night of lighthearted glass-clinking and presidential roasting. But, in keeping with our divided times, even one night of non-partisan diplomacy seems to be a bit of a pipe dream. President Trump — who has, in the past, called the media “the enemy of the American people” — refused to attend for the second year in a row. (He did, however, make sure to share a spirited review of the shindig later on via Twitter.)

And, in the vein of a long, impressive line of comedians to take the dais  before her (like Stephen Colbert and Cecily Strong), host Michelle Wolf went there, joshing about everything from the Stormy Daniels affair to “pro-life” congressmen (with pregnant mistresses) to a tree falling on Kellyanne Conway. But as Wolf later found out, the celebration of free speech apparently excludes any talk of Press Secretary Sarah Huckabee Sanders. 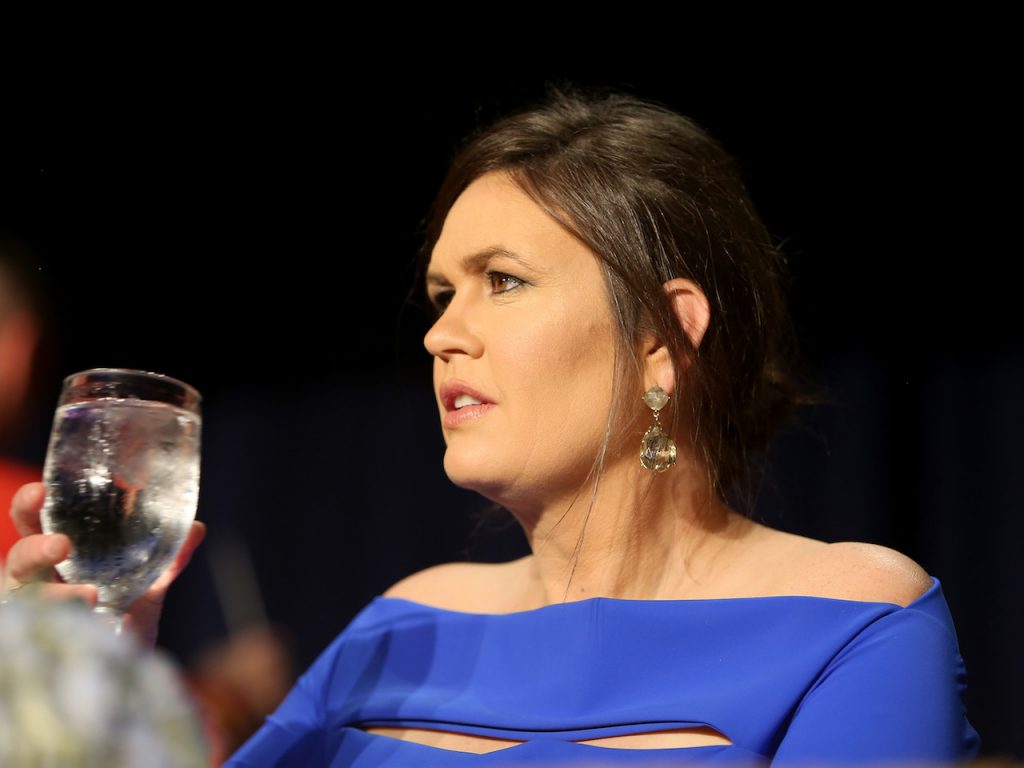 “I actually really like Sarah,” Wolf said, glancing at Sanders, who sat in Trump’s vacated head-table spot. “I think she’s very resourceful. But she burns facts and then she uses that ash to create a perfect smoky eye. Like, maybe she’s born with it, maybe it’s lies. It’s probably lies.”

Interpreting the joke as a dig at Sanders’ looks, rather than her on-off relationship with, well, the truth, many media members took to Twitter to voice their displeasure.

Michelle Wolf didn’t fail just because she was (spectacularly) one-sided. It was because she was unnecessarily cruel on a night the WHCA was trying to showcase decency and purpose.

Women who use their government positions to spread lies and misinformation deserve to face the same withering criticism as men. But leave our looks out of it. Watching from home, I hurt for Sarah, her husband and her children.

That @PressSec sat and absorbed intense criticism of her physical appearance, her job performance, and so forth, instead of walking out, on national television, was impressive.

Others were quick to defend Wolf:

The whole world is insane because a lady said how she felt about people who suppress and manipulate the truth at an event about celebrating free speech.

I just can't let this go. There are actually national journalists tonight raising more hell over comic telling a joke about eyeshadow than a "president" telling athletes with disabilities they're "hard to watch".

The sheer cowardice on display is mind-blowing.#WHCD

The more I think about it, the more impressed I am that Michelle Wolf did such a harsh act WITHOUT insulting any woman's looks. She aimed straight at the white female enforcers & never once suggested that anyone was a bimbo or a dog—like the man they work for surely would have.

The most offensive line in Michelle Wolf’s routine was “Flint still doesn’t have clean water;” if something else she said bothers you more than that then maybe we shouldn’t trust your judgment about anything.

…including fellow comedian Kathy Griffin, who was in attendance that night:

E) Comics by their nature are anti-establishment. They are charged with the often unenviable task of going after people in power. It's a lot easier to tell jokes about the difference between LA and NYC or cats and dogs.

Oh, and Wolf herself:

Why are you guys making this about Sarah’s looks? I said she burns facts and uses the ash to create a *perfect* smoky eye. I complimented her eye makeup and her ingenuity of materials. https://t.co/slII9TYdYx

In a similarly divisive statement, the White House Correspondents Association later apologized for Wolf’s monologue, saying it was “not in the spirit of our mission.” But, hey, at least she got a laugh from one Trump: Eric.