What Happens When There's No Governor General?

An expert on the Westminster system talks about Julie Payette's resignation, the uncomfortable role of the Chief Justice, and what happens next 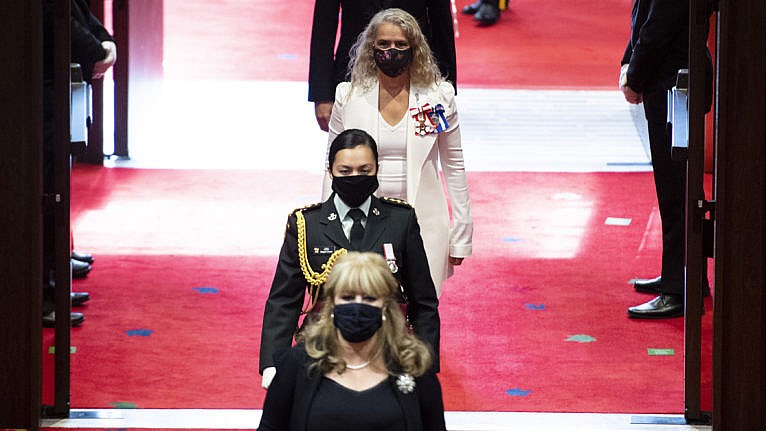 Payette is preceded by Di Lorenzo (at bottom) as she arrives to deliver the Speech from the Throne on Sept. 23, 2020 (CP/Justin Tang)

After months of media reports about a toxic workplace at Rideau Hall, and following an independent report examining the allegations, Governor General Julie Payette announced on Thursday evening that she was resigning. In a lengthy statement she said, in part, “We all experience things differently, but we should always strive to do better, and be attentive to one another’s perceptions.” Her secretary, Assunta di Lorenzo, has also resigned.

Maclean’s, Chatelaine’s sister publication, spoke to Philippe Lagassé, an associate professor at Carleton University who studies the Westminster system, about what this means and what happens next.

Everyone has a right to a healthy and safe work environment. Tensions have arisen at Rideau Hall over the past few months and for that, I am sorry. Full statement: https://t.co/4PgUs1h8Rq

How big a deal is this?

It’s significant in terms of the historical significance; it’s the first resignation of this type for a Canadian Governor General. It’s also significant for the impressions that it may leave about the office and its role and who holds it, and how we go about selecting the person to hold that office.

And it’s equally significant, I think, that it appears at this stage—and we don’t know exactly—that pressure was put on her to resign, and that ultimately she chose to leave.

What do these resignations tell us about the reports of conduct at Rideau Hall and the content of that independent report that we haven’t seen yet?

It appears that the content of the report is such that it was enough to compel Madame Payette to resign voluntarily, which is something she had appeared to resist any contemplation of up until now. Now the contents of the report, we have to wait to see them, but I suspect based on comments that have been made by Minister (Dominic) Leblanc that they were sufficient to allow the government to be fairly unequivocal with the Governor General.

How does a Governor General’s resignation work?

She resigns to the Queen, and the Queen would effectively automatically accept it on the advice of the Prime Minister.

What happens immediately now in terms of filling that role?

Currently, the office of the Governor General itself is vacant. And the Letters Patent 1947 (an edict that expanded the role of the Governor General) include a provision for what’s known as an Administrator, so the administrator is able to exercise the functions of the office in the absence of a Governor General—incapacity, absence and in this case, resignation. And that administrator is identified as the chief justice of the Supreme Court. So for the time being, and hopefully not for very long, the Chief Justice (Richard Wagner) has to fulfill those vice-regal functions.

What are the options for what happens next?

One would hope that when these stories first started breaking in earnest that alternative candidates might have been identified. They might have also looked at who applied to be independent senators or others they had considered to fill other vice-regal positions at the provincial level. So perhaps within that pool would be a suitable candidate.

Others have floated the idea of asking (former Governor General) David Johnston to come back, so that might be a possibility. But one would hope that some time before the next election—and ideally within the next few months—a replacement or successor would be named by the prime minister and appointed by the Queen.

On that note, what are the implications of this occurring during a minority parliament?

I would be somewhat uncomfortable—and I would imagine the Chief Justice would be somewhat uncomfortable—with having to dissolve Parliament if it’s not done on a vote of non-confidence, if it’s done at the discretion of the Prime Minister during a pandemic. I have basic discomfort with the fact that we rely on Supreme Court justices to serve in these capacities, simply because it conflates roles that shouldn’t be conflated. The Letters Patent were written at a time when the Court wasn’t as supreme as it is currently. After 1982 with the codified Constitution and the importance of the Charter of Rights and Freedoms, the Court has taken on such a significant role in Canadian constitutionalism that it adds extra discomfort that might not have existed in 1947.

So I would say that it’s not a solution is that is viable for very much longer.

What principles or concerns should be top of mind when they’re thinking where to go from here?

I think one of the good lessons learned from this experience that should inform future appointments is that whoever is selected has the right character for the job. And I don’t mean that as a slight against any of Madame Payette’s accomplishments, but simply do they want to be in a very public role, living in a public residence, with everything that implies? Do they want to do public events, engage regularly with Canadians, do patronage work with charities? Do they want to do the job, as opposed to simply hold the office? It’s one thing to hold an office, it’s another thing to do the tasks associated with it, or do them openly and willingly and happily.

Do we know about what severance or pension would be available to Madame Payette and to Assunta di Lorenzo?

For Madame Payette, it would be listed in the Governor General’s Act (it is about $143,000 a year for life).

And that would not change under these circumstances?

No, it wouldn’t. And it also comes with $100,000 a year to support whatever activities are tied to her having been Governor General.

Ms. di Lorenzo was appointed under the Public Service Employment Act, and although that is an at-pleasure appointment, those types of appointments are still considered to come with severance if you are discharged. Now the fact that she resigned may change that, but I suspect that it was probably negotiated that she would have some kind of severance.