What Exactly Is Happening To Ontario’s Education System? What You Need To Know

We take a closer look at the proposed cuts students and teachers are protesting en masse. 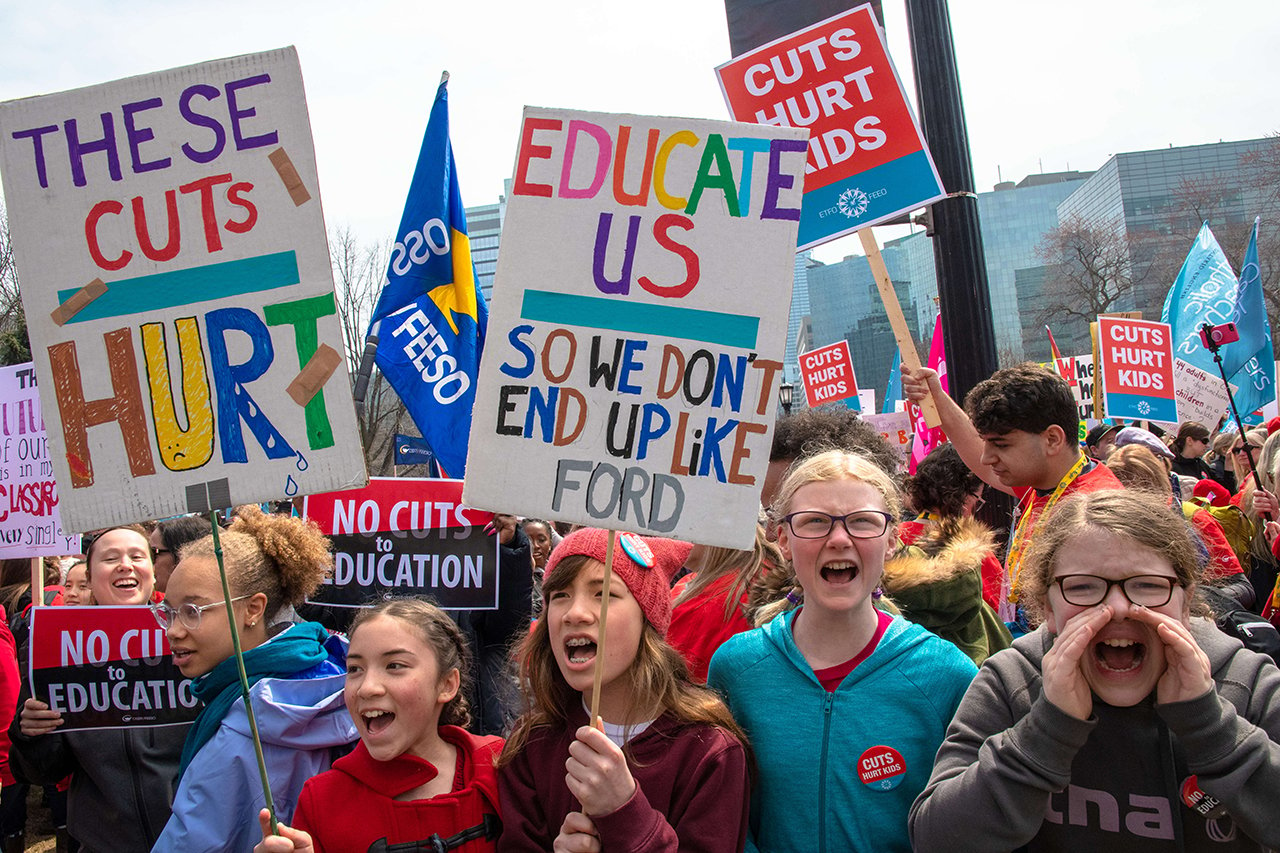 More than 100,000 students participated in a province-wide walkout on April 4, and on April 6, around 10,000 teachers, students and parents showed up to protest at Queen’s Park. They were all rallying against Premier Doug Ford and Education Minister Lisa Thompson’s proposed cuts to education—especially an increase in class sizes and a decrease in the number of teachers. What exactly is happening? We break it down for you.

What exactly are the proposed changes?

In a plan called “Education that Works for You” that was unveiled on March 15, the Ontario government outlined three major goals—modernizing classrooms, modernizing learning and modernizing health and physical education.

As per the plan, “modernizing classrooms” means improving broadband internet access, requiring high school students to take a minimum of four online courses (up to now, online courses were typically optional) and making “sustainable” cuts to Grants for Student Needs, which covers costs for things like classroom supplies and Indigenous language programs. (But, the government notes, “key programs will not be changed, specifically to special education and student transportation funding.”) It also means increasing class sizes—under the plan, average class size for grades four through eight will rise from  23.84 to 24.5, while average class size for grades nine through 12 will jump from 22 to 28.

As for “modernizing learning,” the Ford government hopes to introduce a new four-year math plan that will increase online resources and require new teachers to pass a math knowledge test to become Ontario College of Teachers (OCT) certified—seemingly regardless of their subject expertise. (Thompson has referred to the math curriculum put in place by the previous Liberal government as “failed.”) Note that under section 176/10 of the Ontario College of Teachers Act, teachers already must prove their qualifications in a general or technological subject before teaching it—for example, through a degree, certificate, or work experience. The government will also promote STEM and skilled trades, offer what it says is a new focus on financial literacy in the grade 10 career studies course, and finally finish updates to the high school Indigenous curriculum that began as a response to the Truth and Reconciliation Commission—backtracking on last summer’s controversy when the Ontario Tories put the Indigenous curriculum’s development “on pause.”

For health and physical education, the Ford government also backtracked on its summer 2018 decision to revert schools to the 1998 curriculum, including sex ed curriculum, after much backlash. (The 1998 curriculum didn’t cover consent, online communication, or LGBTQ2+ identities.) The final version looks more similar to the 2015 curriculum, and covers consent, online safety and gender identity and expression. That said, certain topics will now be covered in grade 8, not grade 6. It also introduces education on mental health and concussions beginning in grade one, what family and healthy relationships look like in grade two and new information on vaping and opioid risks in grade six.

Yeah, this is a weird bit from today's Question Period. pic.twitter.com/9O3e2Y3urg

How many teachers will lose their jobs?

That’s unclear. On April 4, the Toronto Star reported on a ministry memo discussing plans to save $851 million by phasing out 3,475 teaching positions over the next five years. The government has said that it is not planning to lay people off, instead, it will not be rehiring for roles after staff members retire. However, even if teachers are not directly laid off, they may have their jobs declared “surplus.” That means their current position would no longer exist and they would be shuffled elsewhere in the system.

What do the proposed changes mean for students?

Fewer teachers obviously means larger class sizes and fewer classes across the province. Already, students in Mississauga are seeing fewer course options and their electives cut. As well, teachers’ unions argue that to compensate for certain classes that are smaller by necessity—for example, technology classes that have limited equipment, or arts classes with lower enrolments—other courses will have to increase in size to maintain the required average. (In other words, to keep smaller specialized classes, schools would have to have larger general classes.)

Diane Dewing, the president of the Ontario Teachers’ Federation, is worried about how school boards will justify certain classes going forward. “We fear that arts classes, which often have small numbers of students, will disappear because there simply won’t be the funding to have that teacher.” She also raises concerns about how smaller schools such as francophone schools and those in rural and northern areas might be disproportionately affected by budget cuts. Larger school districts are already anticipating big changes—for example, the Toronto District School Board has projected a budget shortfall of $67.8 million for the upcoming school year.

Larger class sizes mean students will receive less support and one-on-one time from teachers. There are also concerns about the mandatory high school online courses (the new plan doesn’t specify what kind of courses those will be, only that students must take four), as researchers have pointed out that administrators are often tempted to fill those classes with more students because they aren’t limited by space. And unions argue that overloading teachers with too many students—whether it’s in classrooms or via e-learning—will decrease the quality of education.

“There has just been an increase in an inclusive approach to education—more kids with different needs in classrooms than there used to be—all of that calls for an increase in supports and instead the government is going in the opposite direction,” says Harvey Bischof, president of the Ontario Secondary School Teachers’ Federation (OSSTF).

Both Ford and Thompson have shared a Toronto Sun column pointing to certain studies that say class size has little effect on students; research on the relationship between achievement and class size is widely considered to be inconclusive.

Did the Ford government consult with anyone about these changes?

Thompson launched Ontario’s largest public consultation on education in August of 2018, consisting of an online survey and telephone town halls, and by the time it wrapped last December, a total of 72,000 parents, teachers, students, employers and organizations had weighed in.

Sounds extensive, right? Not so fast. Bischof says the consultations did not address the most significant policy changes, such as cutting teachers or making students take online courses. “It was just political pandering,” he says.

How are students and teachers responding?

Frustrated stakeholders have made their views on the province’s educational plans known, including during the aforementioned walkout and Queen’s Park protest (the latter of which involved teachers who bussed in from across the province).

How is the government responding to pushback?

Ford called the students “a bunch of pawns” and Thompson released a statement that essentially claimed that the walkout may have been organized by the teachers’ unions. “Instead of focusing on political stunts, I encourage the unions to work cooperatively with us on the real challenges facing Ontario’s education system such as the fact that too many of our kids are failing math—graduating without the skills necessary to successfully enter the workforce,” she said.

Apparently, she missed the memo that today’s teens are incredibly politically empowered. On April 8, the student team behind the walkout—called Students Say No—released a statement against these claims: “We would greatly appreciate it if you stopped lying to the people of this province in order to discredit our work…To claim that this walkout was organized, orchestrated, or puppeteered by adults is not only false, but extremely insulting to the young people of Ontario.”

when ford and thompson dismiss us as "union pawns", the message is clear: not only do they think young people are incapable of organization, autonomy, and power, but they're also terrified of the potential that we hold. #studentssayno

According to the 2016 EQAO stats—provincial tests on literacy and math that are administered to students in grades three, six and nine—test scores have gone up in every area since 2003, except for grade six math.

In 2016, half of grade six students failed to meet the provincial standards in math. However, grade nine academic and applied math scores have gone up by 18 and 24 percent, respectively, since 2003.

One thing that’s important to note here: the province is responsible for curriculum creation. “By blaming teachers for grade six math scores when teachers don’t determine the curriculum except in how they deliver it, the government is deflecting from their responsibility for those sorts of issues,” Bischof says.

Is this… déjà vu?

In 1997, former Progressive Conservative Ontario premier Mike Harris called the education system inefficient and too expensive to run. He moved to weaken school boards and grant the province power to determine class sizes under Bill 160. Ontario teachers went on the largest teachers’ strike in North America for two weeks—to fight against cuts to prep time and teaching positions, as well as the potential of having non-certified instructors teach students. The bill was eventually passed.

Neither the Ontario government, nor the striking students and teachers, have shown any sign of backing down. Ontario could start bargaining at the end of this month with teachers and education workers, whose contracts expire at the end of August. Ford is telling teachers not to strike and pull the “nonsense on parents and students” because “they get their three month holidays, they have the best benefit package in the entire country, the best pension in the entire country.”

Considering the way the Ford government backtracked on its sex-ed changes, it’s possible that it will also take the mass protests surrounding these proposed changes to heart. However, Bischof says the government should be making changes for “good empirical reasons” and not based on “a knee-jerk reaction.”

Negotiations are starting, with the OSSTF as the first union to file a notice for discussion to begin.

Also says that government will consider changing expiry dates of future labour agreements to "minimize any disruption to students' ability to attend class." Contracts typically expire at the end of August.

Meanwhile, the province has offered up to $7.35 million to large municipalities and school boards to use on reviewing their budgets for savings. Mayors have pointed out that their cities follow a calendar year budget, not fiscal years, and that they have already passed their budgets. Toronto mayor John Tory added that Toronto already has an annual review process and the province’s offer to fund another review won’t help mitigate any damage.

Large municipalities have begun discussions about either raising municipal taxes or cutting services due to the province’s many funding changes.