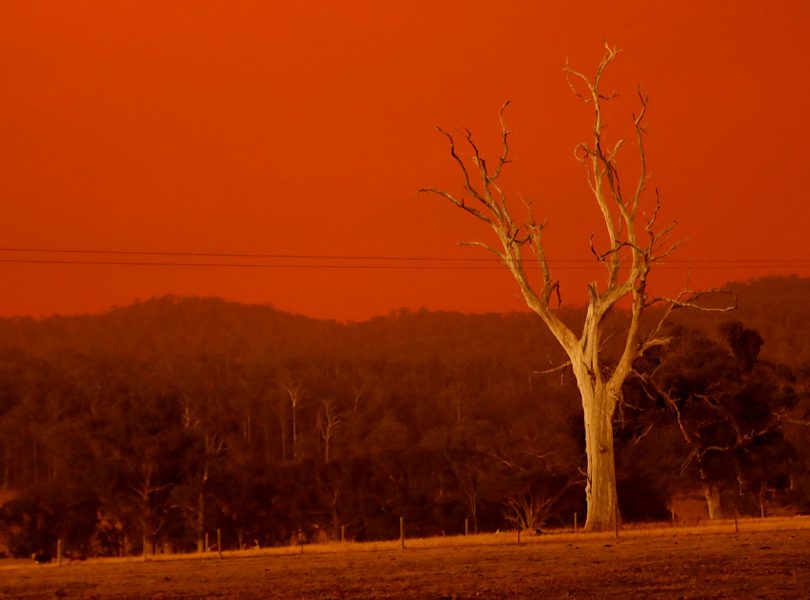 The images of Australia’s out-of-control bush fires resemble something from an apocalyptic film: charred animal remains littering the roadsides, people on once-scenic beaches waiting to be rescued by sea while flames flicker close by, ash coming down like fluffy snowflakes, buildings reduced to dust. They’re distressing to look at but important to see.


The country is no stranger to bush fires, but this is next level. In fact, due to extreme drought and heat (*ahem* climate change), it’s the worst bush fire on record and has been raging since July with no end in sight. So far, 24 people have lost their lives, an estimated 480 million (!!!) animals have perished and over 1,000 homes have been destroyed.

Every state has been affected, with New South Wales (that’s where Sydney and Canberra are located) and Victoria (Melbourne) being hit the hardest. If you don’t have a sense of how vast Australia is, just picture a land mass that would roughly reach from coast to coast and stretch up into Saskatchewan if you plunked it on top of the United States—and it’s all on fire with varying degrees of severity.

As of our publishing date, almost 13 million acres have burned. That’s more land than the California and Amazon fires combined. And to add insult to injury, the Australian prime minster, Scott Morrison, was MIA on a Hawaiian vacation while his country burned.

Wanting to turn a blind eye or offer “thoughts and prayers” when there’s a global catastrophe is a common reaction—it’s really hard to know how to help, especially when you’re far away. We can’t all feed water to parched koalas or offer displaced victims a couch to sleep on, but we *can* all pitch in in varying ways to make a tangible impact for Australia and our future. Here’s how:

Not everyone is financially able to give, but if you can, here are some reputable organizations to send your money to. (And if you can’t donate, keep reading—we have other tips that will cost you nothing.)

WIRES
The Wildlife Information, Rescue and Education Service works to rehabilitate and preserve Australian wildlife. Every year, it helps tens of thousands of animals.

The Australian Red Cross
A well-known charity, the Red Cross is helping victims evacuate and setting up recovery centres.

GoFundMe initiative for First Nations communities
This page has been set up to help displaced Indigenous people and to offer support with rebuilding.

Many of the firefighters on the ground are volunteers. Here’s how to support their efforts:
New South Wales Fire Service
Country Fire Authority
Rural Fire Brigades Association
Country Fire Service in South Australia

No, we don’t have a vegan agenda, just scientific facts on how animal consumption affects the planet. The University of Oxford researchers behind this 2018 study (the largest ever conducted on farming and the environment, BTW) concluded that adopting a vegan diet was “probably the single biggest way to reduce your impact on planet Earth.” It can do way more than simply cutting down your flights or choosing to carpool. (But those are good ideas too.) It won’t put out the fires in Australia overnight, but this lifestyle change will help lighten the load on Mother Earth and help prevent future catastrophes.

You don’t have to be a full-fledged vegan (although doing so can reduce your food-related carbon footprint by up to 73%)—even just reducing your consumption of animal products will make waves. And we even have some recipe ideas here.

Don’t shut up about what’s happening

This one is simple but important. The more people who are aware of these very serious issues and how we can make a difference, the closer we are to change. We need to talk about what’s going on and inform others on how to help. Discuss it with your friends and family, and post about it on social media, whether you have five followers or 5 million. It’s not preachy if you go about it in a thoughtful way. Let’s hold each other accountable and keep the momentum going.

Make your voice heard by calling your local member of parliament and asking about their climate-change plan and how they’re supporting Australia. Again, this isn’t an overnight fix; it’s about holding people in power accountable and keeping the topic at the forefront. When election time rolls around, make sure you vote and that you cast your pick for someone with the environment on their agenda.

Volunteer where you are

If you can’t help on-site of a natural disaster, make your efforts count at home. Volunteer with environmental, resettlement or wildlife organizations in your area or spend an afternoon picking up trash in public areas.