On Justin Trudeau's charm offensive, identifying as a feminist and why women don't want quotas — they want to compete. 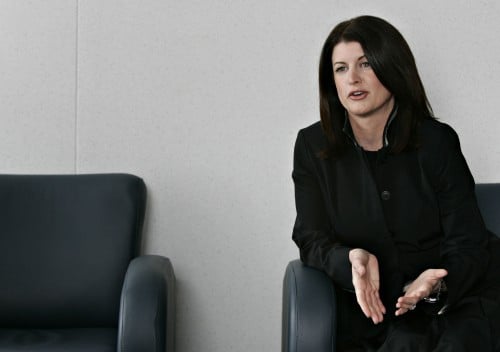 What the Conservatives hoped would be a banner year for their party wound up being a bit of a dud: They called an election and the man they deemed “just not ready” became prime minister with a majority mandate. After ruling for the better part of a decade, the Conservative Party now fills the opposition bench while it looks to rebuild for future generations. But none of that flusters interim leader Rona Ambrose, elected by her colleagues to head up the party until a new leader is chosen in 2017. In a one-on-one interview with Chatelaine, held the same day of the Maclean’s Town Hall with Prime Minister Justin Trudeau, the Parliament Hill veteran says it’s an invigorating time for the Conservatives — and that women have a major role to play in the party’s future.

Today, Justin Trudeau took part in a big town hall with Maclean’s, which he promoted with a video that went viral yesterday, the same day he took kids from the Children’s Hospital of Eastern Ontario to an advance screening of Star Wars. What do you make of this charm offensive?

I think it’s good that he’s connecting with Canadians. That’s part of the job. I think the criticism of him is that he’s not a serious thinker on some of the issues that people need their prime minister to be, whether it’s finance or foreign policy. I think people welcome approachability, but they also need to see that serious side. That’s the place where he still hasn’t proven himself yet. But obviously he has time.

Does it put pressure on you and the Conservative Party to be more accessible than has been the case in the past?

My job is to lead the Official Opposition and be the voice of Canadians who don’t see themselves reflected in the Liberal Party. There are 60 percent of Canadians who didn’t vote Liberal. There are a lot of people who are concerned about their taxes going up, the deficits piling up, that we’re retreating from the fight against ISIS. These are very serious and important issues. Does it mean I need to take more selfies? No.

You wouldn’t pose for Vogue?

Who knows? But these are important issues. It’s fine that you want to take a lot of selfies, but you also need to be a leader on the world stage — Canadians expect that. My job as Her Majesty’s Official Opposition is to hold the government to account on those very serious issues. Will we also have fun? I’m sure we will.

Some would argue that meeting Syrians refugees at the airport is important work and sends an international message.

Any prime minister should be at that airport. That was wonderful to see. But the most serious issue affecting Canadians is the economy, and we haven’t heard a lot from him yet. In the Speech from the Throne, there was no mention of an economic plan, nor was there any mention of the private sector. This Liberal government is about big government, big programs, big spending. It’s for us, on the Opposition side, to represent a contrasting set of values: smaller government, low taxes, less spending and a real eye to making sure that we are focused on job creation, on innovation, on the things that will make sure our economy stays strong. We can’t have the other things in this country that we’re so privileged to have, like a strong healthcare system or a good social safety net, without growth and a strong economy. That’s the top issue for me.

You’ve said the interim leadership role is a good fit for you because you’re a bridge-builder and an organizer. Aren’t those also great qualities for full-time party leader?

Yes, I’m sure they are [laughs]. But this is what I’m focused on. Believe me, it’s a huge challenge to be the leader of the Opposition for the next 18 months to two years, to help renew the party and to take us into a leadership race to choose a new leader.

What are you looking for in a new leader? There’s been a lot of talk about whether Conservatives should choose a woman.

It’s interesting because not only was I elected by my caucus, we had four other women who ran for the interim leadership. The Conservatives are the only party that has ever had a woman prime minister. We’ve always had very strong women in our party and I think part of that is because we don’t adhere to quotas. The women in our party want to compete on an even playing field and they want to win. We have some incredible women, like Lisa Raitt, Candice Bergen, Kellie Leitch, Michelle Rempel. I think we’ll actually have more women running [for leader] than men.

What excites you about what they have to offer?

They’re very strong communicators. They’re very intelligent. They’ve come, most of them, from humble beginnings, have worked so hard, are highly educated, have earned everything they have in their lives. They are confident, articulate, strong and know what they stand for. I think that’s a great example of how women can succeed in politics — or in any field. Politics is not an easy life and there are times when politics is very tough on women. But we’ve seen these women thrive.

Is there a perception that women can’t handle it?

The challenge can be perceptions. But I think we’re eliminating that by having someone like me elected and lead a party. I wasn’t appointed. [The NDP’s] Alexa McDonough was elected, but otherwise, most women who have been leaders of parties have been appointed. It’s important that we’re elected. That adds credibility. But the challenges for women in politics, balancing family and career, are more extreme than most men experience. That’s just part of the way it is.

Trudeau has said he identifies as a feminist. Do you think it’s important to have a feminist prime minister?

I think it’s important that everyone who’s elected takes women’s issues seriously. It’s up to him if he defines himself as such. But it’s also important to recognize that, for instance, ending violence against women is not just a women’s issue. It’s an issue that involves men as well. When people talk about important fiscal policy and say ‘that’s not a women’s issue’ — of course it’s a women’s issue. To me, that’s the most important thing — that women are treated and considered and recognized as full participants in our economy and our society. That’s a feminist vision.

So it doesn’t necessitate a label?

I think you have to walk the talk. I was disappointed that he announced—before he put his cabinet forward—that he would have a gender quota. As a woman, I would rather be announced as a cabinet minister and have earned that position, instead of [Trudeau] saying, “We’re going to have gender parity and, oh, by the way, here it is.” In this day and age, women want to be treated equally. If you’re qualified and you’re credible and you’re strong, you get the job. I’m sure the women he appointed are all those things. There’s no need to say that.

Your shadow cabinet is nearly as equitable.

Well, we didn’t need the quota, and neither did he. You always have to be pressuring leaders to make sure they recognize strong women, there’s no doubt about that. All the work I did about women on [corporate] boards is a perfect example. You may not need to push a quota to get more women on boards, but you definitely have to almost name and shame the chairmen who have no women on their boards and claim that they can’t find any women that are good enough to be on their boards. That’s ludicrous.

Name and shame? You’ve done that?

Do you identify as a feminist?

I have, my whole life, called myself a feminist. But it is a complicated issue because so many women resent the negativity around the word feminist. And that’s too bad. I always say to young women, “You shouldn’t be afraid to call yourself that. At the most basic level, it’s about equality and it’s about women succeeding and reaching their potential.” It is a bit outdated these days.

You think the word is outdated?

I think it is for a lot of younger women. I talk to a lot of younger women who just completely dismiss that movement and say they feel they have the opportunities and they want to compete. And for older women, there’s sometimes a very negative association with the word — that it’s about manhating. I see it as purely about advancing women’s issues and focusing on the things that matter to women in terms of their equality — issues like bringing in matrimonial property rights for aboriginal women. I championed that law.

2015 saw a lot of discussions about sexual assault and harassment, and you’ve been outspoken on these issues. Where do you see that conversation going in 2016?

I think that sexual violence is going to continue to be an issue. I think some women are finally feeling comfortable coming forward, but that’s only some women. There are still a lot of women who don’t feel comfortable coming forward because they’re shamed when they do or they don’t have a good experience in the justice system. Twenty-five percent of women experience sexual assault in university — that’s a huge number. The statistics are staggering about how many women sexually assaulted in their lifetimes. That’s only the women who report. Aboriginal women are five times more likely to experience assault than non-aboriginal women. I’ll keep speaking out — I have my whole life. It’s a really important issue for me.

Related:
The next leader of the Conservatives will be … a woman?
Justin Trudeau’s new cabinet is a dream team — and here’s why
Here’s a full list of Canada’s 88 female MPs