The Canadian Mrs. Universe winner is all kinds of amazing

Less than 48 hours after being crowned, Ashley Callingbull called out Stephen Harper, spoke candidly about assault and challenged our assumptions about beauty queens.

Representing First Nations on the international stage was the best feeling in the world. I'm so proud to be @mrsuniverse2015 ❤️

Alberta’s Ashley Callingbull plans to challenge all the stereotypes you have about beauty queens — and she’s not wasting any time.

Callingbull, 25, from Enoch Cree Nation, made history this weekend in Belarus when she became the first Canadian, and first aboriginal woman, to win the Mrs. Universe crown. Then, with the media spotlight firmly in place, she made it clear that she intends to use her international platform for much more than ribbon-cutting.

Here is a quick guide to Callingbull (whose married name is Burnham), someone we hope to be hearing a lot more from over the next year.

She intends to use her platform for change.

Less than 48 hours after her win, Callingbull took to social media to call on aboriginal people to vote in the upcoming election: 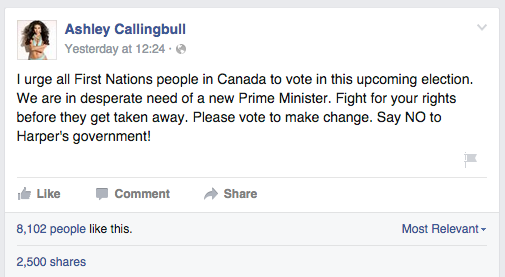 And when she was criticized for making that statement, she fought back: 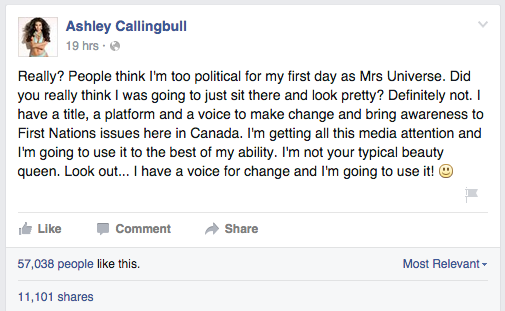 She also committed to furthering the issue of missing and murdered indigenous women:

@AshCallingbull Your support with our Missing and Murdered Native women and children I hope in at the top of your List of things to do..

She entered the pageant for more than a crown.

The theme for this year’s competition was “domestic violence and reflection over children.” As a survivor of both sexual and physical abuse, Callingbull told CTV news that she “wanted to be there for other women, to have a voice for them, because a lot of people can’t talk about things like that. And a lot of people can’t heal on their own. They need someone to guide them.”

She also wanted to celebrate her First Nations identity, wearing a traditional jingle dress for the parade of nations, and singing a traditional song for the talent competition. “A lot of people misrepresent us in pageants,” she told CTV news. “For example, if a Canadian woman is representing Canada, they might wear a revealing, sexualized outfit, with a head dress, and that is a complete misrepresentation.”

Yesterday was the national outfit parade for all the delegates. I wore a custom Canadian Jingle dress & beadwork that showcased my culture 😊 Made by my friend Dabney Warren. ❤️🇨🇦❤️ #GoCanada @mrsuniverse2015

She credits her culture for helping her “heal.”

With her difficult childhood, Callingbull told CTV news that people often ask why she didn’t turn to drugs and alcohol. “What I did, was turn to my culture. I pushed myself into my culture, into my beliefs, and my traditions, and I used that to find myself and to heal.”

Discrimination and racism haven’t stopped her.

Callingbull, who is a trained dancer, actor and advocate, told the CBC she was the target of racist comments when she was a contestant in the 2010 Miss Canada pageant. She expanded on that in a CTV interview: “When I first joined pageants, people didn’t expect me to win, just because of my background. They didn’t even want me to be there… and now I’m successful, I’m not the stereotype people perceive me to be. I’m educated. I do a lot of charitable work. I’m not involved with drugs and alcohol, I’m staying focused and I’m helping people at the same time.”

The best feeling! So surreal 💕 @mrsuniverse2015

Twitter exploded with support for Callingbull — posts crowned her “an inspiration,” “a trailblazer” and “the most interesting person in Canada right now.” Author and fellow Albertan Kelly Oxford penned a congratulations message on Instagram, saying that while she is “typically anti-pageant and objectification of women,” she believes “Ashley will be such a positive inspiration for so many Canadian First Nations girls — who are the group of Canadians needing it the very, very most.”