The Spring Weather Forecast According To Environment Canada 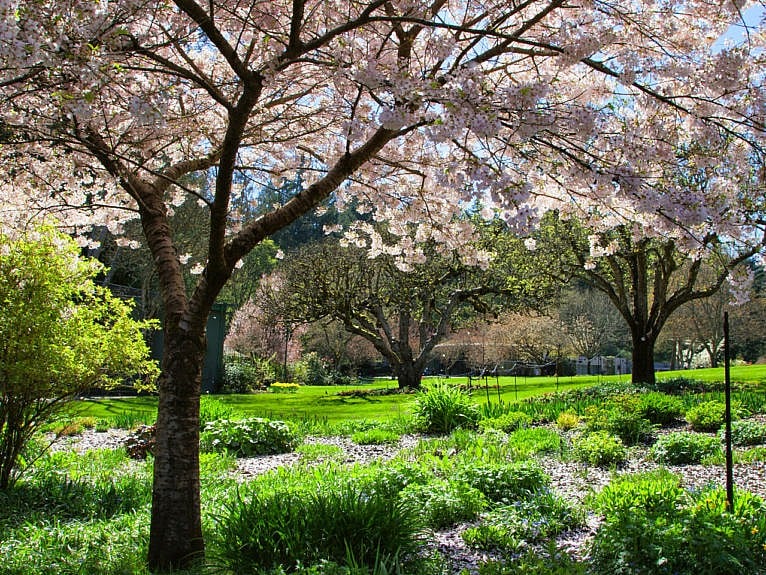 Vancouver in the spring. (Photo: iStock)

While spring doesn’t officially start until the end of March (on the 20th, to be exact), many parts of Canada have already been experiencing warmer weather. So when can we start planting our gardens and getting ready for summer?

Though it’s hard for meteorologists to say exactly what the forecast will be all season long, David Phillips, Environment and Climate Change Canada’s senior climatologist, gave us a nationwide temperature and precipitation forecast for the months of March, April, and May. (Of course, though this is a seasonal forecast, it’s still important to check daily local conditions on an app like Environment Canada’s WeatherCAN app before venturing outside).

While spring tends to conjure images of flowers blooming, snow thawing, and escalating temperatures, Canadian spring is oftentimes just as cold and dreary. “I remind Canadians that in some places, there’s more snow in the springtime than there is in the winter,” says Phillips. “And typically for most places, anywhere between 15 to 30 percent of their annual snowfall comes in spring or after the first of March.” Luckily, the latter half of the season tends to give way to warmer temperatures and milder weather.

Here is what Environment Canada is predicting this winter, region by region.

According to Phillips, Western Canada will have a slow start to spring, with colder-than-normal temperatures forecast. Thanks to cold waters in the Pacific, B.C. experienced a colder-than-normal February, with cool conditions continuing into early spring. Because of this lingering cold, coupled with the wetter-than-normal conditions Environment Canada is forecasting for the region, B.C. and Alberta can look forward to an extended ski season.

The wetter-than-normal weather will also contribute to what is hoped to be a less-intense forest fire season out west, which typically gets its start in May. “May is when the forest floor begins to green up and that can prevent forest fires, but what happens if it’s all dead and dried out and you get lightning, then that becomes an issue.”

Saskatchewan and Manitoba will experience a noticeably warmer-than-normal spring. Phillips says that Environment Canada is forecasting, with pretty high confidence, that the Prairie provinces will be about two or three degrees warmer than normal. “That doesn’t seem like a lot, but it is when it’s averaged out over 90 days,” he says.

Precipitation-wise, the prairies are forecast to be drier than normal. While this is good news on the flood front (less precipitation means that the likelihood of flooding is also lower), it might prove problematic for farmers. “June is their driest month, so it’s never a problem for farmers until May or June,” says Phillips. “Right now, we’re showing drier-than-normal conditions in southern Alberta and Saskatchewan, and if that continues and we don’t get those spring and summer rains then that clearly could be an issue for crops.”

After a mild winter, that trend will continue with Ontarians and Quebeckers experiencing a warmer-than-normal spring. Like the temperatures in the prairie provinces, Ontario’s spring will also be two or three degrees warmer than normal. That being said, Phillips warns those in Ontario and Quebec that “we’ve never had a spring without snow in Ontario,” he says. “It could be warmer than normal, but not a rush to spring.”

This region can also expect normal amounts of precipitation this spring. It’s also looking like Ontario and Quebec will avoid a disastrous flood season this year. “Even though there’s 58 centimetres of snow sitting on the ground right now in Ottawa, there’s been virtually no rain in January and February, so the snowpack is rather dry,” says Phillips. “They shouldn’t worry about flooding like they had in 2017 and 2019.”

After a mild winter, Canadians living in the Atlantic provinces will experience a warmer-than-normal spring. “Atlantic Canada’s really been living in a charmed world,” says Phillips. “They’ve had a few storms from the United States, but not so much to bury them, and the waters in the Atlantic are very warm this year.” In fact, the Atlantic waters are about five degrees warmer than normal, leading to an accelerated beginning of spring.

While the western Arctic looks colder than normal, Phillips says that the eastern Arctic will be normal to warmer-than-normal this spring. This all lines up with a larger trend of a warmer Arctic due to the effects of climate change. “We’ve seen a record year for loss of ice in the Arctic, which is very ominous,” says Phillips.