Should Canada sever ties with the British monarchy?

Does it make sense that Canadian citizens swear an oath of loyalty to the Queen of England? We look at the proposed solution. 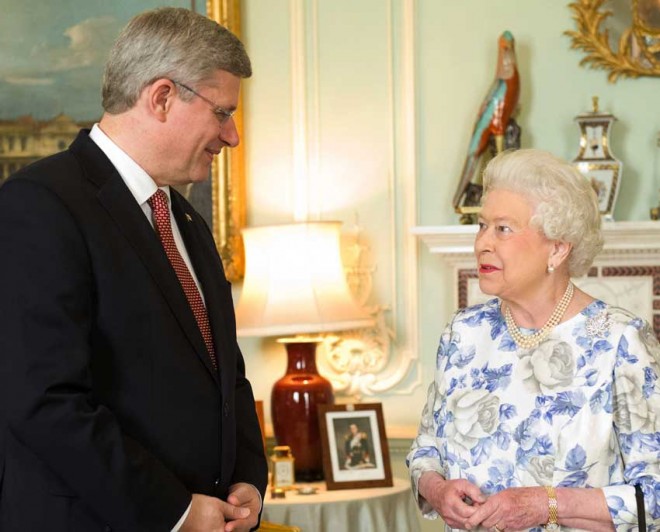 Prime Minister Stephen Harper meets with Queen Elizabeth II at Buckingham Palace in London June 6, 2012. ahead of a lunch hosted by the queen with heads of government and representatives of Commonwealth nations. (Photo credit: SEAN KILPATRICK/AFP/GettyImages)

It appears some leaders are hoping that the Canadian government will initiate a gradual severing of ties with the British monarchy, though the timing may not be ideal — there’s a royal baby on the way!

Post Media reports that NDP MP Pat Martin is suggesting the first step in the long goodbye would be to strike any mention of the Queen in Canada’s citizenship oath.

The Member of Parliament for Winnipeg recently proposed making the change to the oath during a recent session of Parliament. This isn’t the first time Martin has attempted to put the issue on the government’s agenda. He’s reportedly brought up the issue twice before.

The Oath asks new Canadians to pledge their loyalty to “Her Majesty Queen Elizabeth the Second, Queen of Canada, Her Heirs and Successors”.

It’s that phrasing that has some, like Martin, agitating for an amendment that more closely reflects the reality of being Canadian — like the fact that our ties to the British monarchy are more sentimental than real.

Martin would like to see the monarch’s name struck from the Oath and instead replaced with a pledge of loyalty to Canada rather than a foreign monarch.

In an interview, Martin discussed how odd it seemed to him to watch a group of new Canadians swear they would be loyal to the Queen of England.

“It’s just so fundamentally wrong,” he was quoted as saying. “These people are from all over the world — Paraguay and the Congo and the Philippines and Vietnam. Why are they swearing loyalty to some colonial vestigial appendage from the House of Windsor? It’s bizarre really.”

Martin has a point. But then again, the entire notion of monarchy is pretty bizarre when you get down to it, too. The idea that there are such things as kings, queens, princes and princesses at all, and that they come by their right to proclaim themselves as such divinely — wow, that’s kooky. (Please tell me I’m not alone in thinking the whole idea is a tad nutty.)

And yet, despite its absurdity it endures. How to explain that longevity despite its flimsy foundations — now, that’s something Martin may have an even harder time achieving satisfactorily.

What do you think? Should we sever ties with the monarchy? Tell us in the comment section below.