Samantha Youssef on becoming an animator and founder of art school, Studio Technique

Ms. Chatelaine: She went from drawing movie stills to running her own animation school — and was voted a “sexy geek” by Wired along the way 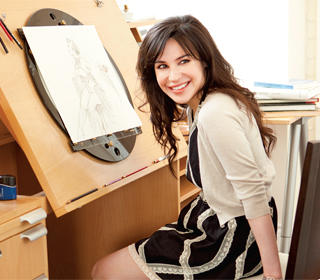 Cartoon sketches line the reception room outside Samantha Youssef’s drawing space at Studio Technique in Montreal. From Day Duck to Aladdin’s villain, Jafar, she’s been inspired by these characters since she was old enough to watch videos. By the time she was three, she’d make her parents freeze-frame VHS tapes so she could draw scenes from Mickey and the Beanstalk and How the Grinch Stole Christmas! Today Samantha does her animation sitting at an enormous desk inside her white-walled drawing room.

Despite her early obsession, Samantha didn’t expect to become an animator. “I thought I’d follow in the footsteps of my parents, who are both surgeons,” she says. Growing up she excelled in math and physics,
but found herself sketching in the margins of her notebooks—to her teachers’ chagrin. Her decision to study art came by chance: She was leafing through a book on the art of Disney at a Montreal bookstore when an animator told her about the animation program at Sheridan College in Oakville, Ont. “Instead of applying to med school, I sent Sheridan a portfolio and got accepted,” she says. “It was a shock to my family. I’d always loved Disney, but nobody—including me— thought of drawing as a career.”

Samantha was one of only four women in her college course, and the ratio is pretty much the same
at work: “There can be a boys’ -club mentality at some studios. They go out for beers and make decisions when you aren’t there. And if a woman succeeds, people are quick to assume it’s because she slept with the right person or because she’s ‘hot.’” That’s why Samantha panicked when she was voted one of Wired magazine’s Sexiest Geeks two years running. “It’s flattering, in a way, but it’s also a concern when you work in a male-dominated field. When you’re a petite girl, people don’t always take you seriously.”

Samantha’s small size has been beneficial in other ways though: She’s taken ballet classes at the Royal Academy of Dance since she was three and workshops at Canada’s National Ballet School. The classes prepared her for animation. “Dancers spend 10 years honing their technique, so when they teachers’ chagrin. Her decision to study art came by chance: She was leafing through a book on the art of Disney at a Montreal bookstore when an animator told her about the animation program at Sheridan College in Oakville, Ont. “Instead of applying to med school, I sent Sheridan a portfolio and got accepted,” she says. “It was a shock to my family. I’d always loved Disney, but nobody—including me—thought of drawing as a career.”

Samantha got her dream job working for Disney in Paris and Australia, and after her contract ended in 2007, she noticed a gap in the market for feature-film quality animation. “Drawing is the foundation animators need—and aren’t getting—in existing computer-based programs,” she says. “My tools are pencils and paper.” She returned to Montreal and opened Studio Technique, the city’s first classical artistic-training studio, and eight months later received a $10,000 grant from the Pepsi Refresh Project. She’s since taught over 150 amateur and professional animators.

Samantha challenges her students to draw for the duration of her classes and is never without her sketch pad and pen herself. “I draw to remember specific moments, ” she says. “I capture unique gestures–how people sit or touch their face–to bring back to my drawing board. My whole life exists in these pages.”

My proudest moment was… when a student at my studio told me my classes restored their love of drawing.

I define downtime as… curling up with my favourite book, Jonathan Strange & Mr. Norrell by Susanna Clarke.

My favourite moment of the day is… that time, early in the morning, just before anyone has woken up — it’s just me and a cup of coffee.