What it feels like to be naked in front of strangers

As an experiment, Marci O’Connor decided to strip for total strangers. She shares what it feels like to bare it all for art’s sake. 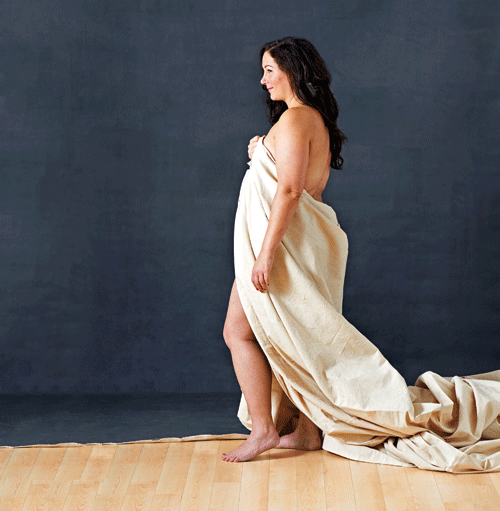 There are nude drawings of me on the internet — and I gave permission for them to be there.

I listen to Katy Perry, live in the suburbs and read a lot of Margaret Atwood. I mean, I drive a station wagon.

Yet there I was on a chilly fall evening, posing and prancing naked in front of 10 total strangers. For three hours, I was a life-drawing model. I’d promised myself I would honour my body and my commitment and do it without being bashful — or throwing up.

A few weeks earlier I’d stumbled on the sketches of Toronto-based artist Kagan McLeod online. I grew up thinking that with my looks, I should have been born smarter — and modelling had never crossed my mind. Yet I was intrigued about what it must feel like to be studied (and drawn) this way. Back in university, I had a friend who supplemented her income as a life-drawing model, and I remembered her telling me they were always on the hunt for “interesting” body shapes.

So I sent Kagan some fan mail, praising his work and asking shyly about becoming a model. Apparently, if you own a dressing gown that you’re willing to take off, you’re in. Less easy was owning up to why I’d want to do it. But I’ve spent an enormous amount of energy tackling enormous body image demons (shouldn’t I be thinner, firmer, perkier?), and this just seemed like the next challenge. After many frantic questions for Kagan — “Will there be men and women present?” (“Yes”); “Can we do this by candlelight?” (“No”); “Has anyone ever fainted?” (“Not even once”) — we arranged a date for me to model.

I was curious about what my husband would think. He likes to see me in the buff, but I wasn’t sure how on-board he’d be with me baring it all for others. Turns out he was pretty cool with it once he understood how important it was to me, or maybe he just reckoned it would lead to more spousal nudity. My boys, aged 11 and 13, thought it was #sogross. Exactly what I’d expected from them, really.

Once I’d committed to the idea, there was some body prep to consider. First, I needed to deal with my bikini line. (I chose the heart-shaped option because it seemed the friendliest.) I also paid more attention to what I ate. As much as this was not about my weight, I’d recently shed 40 pounds, and if I was going to be honest, I knew I wouldn’t have gone through with this otherwise.

As prepared as I felt, there was a moment the night before when I freaked out, unsure if I could go through with it. But then I remembered that when my mom was just seven years older than I am now, she faced her first mastectomy. Her figure was about to change in ways she had no control over. “Yeah,” I thought, “I’m just going to honour the shit out of my body.”

My plan was to sit comfortably at a café before the session and sip on a steamy mug of lemon water. Instead, I found myself in a local pub drinking a glass of pinot noir. And then another. Just like a real model, I told myself.

The studio was in a funky industrial building. The lighting was soft, and there were chairs set up in a semicircle around a white backdrop. Kagan was a friendly, calm presence, and it occurred to me only later how important trusting him was to the evening’s success.

I stepped into the bathroom to undress and threw on an oversized hoodie. I looked at my reflection meaningfully in the mirror and realized I secretly loved what I was about to do, and there was no point in lying to myself about it.

I walked out and introduced myself to the group, and then there was nothing left to do but whip off my sweatshirt and stand naked in front of strangers (many of whom would post their drawings online later). There was nothing to do with my hands and nowhere to rest my gaze. I was nude in a room full of strangers, and now they expected me to pose? What on earth was I doing? I thought, “What if I can’t do this?” But I took a deep, loud breath and found my first pose.

The first part of the evening was broken up into several one- and two-minute poses, which helped get the artists warmed up. As they frantically filled their pages I slowly found my footing and even shared a few awkward smiles with a few of the women in the group (while still actively avoiding eye contact with the men). I started with some yoga-like stretch poses, but my repertoire of poses was quickly exhausted, and I invited the group to call out ideas. “Pretend you’re smashing a car.” “Walk through a creepy haunted forest.” I dissolved into a fit of giggles as I tackled each pose. I felt very young and very old at the same time.

As the night progressed, I became more relaxed. I was awkward, but not unhappy. I was both better and worse at it than I thought I’d be. I felt my cheeks flush and dampness under my arms, behind my ears, between my legs. But I felt seen. And it was thrilling. There was nothing sexual about this, but it was intimate. I went into it thinking it would be one of the most challenging things I would ever do, but it was incredibly liberating.

The last part of the night was far more relaxing, as the poses lasted anywhere from 10 to 20 minutes, and I did them sitting and lying down. By the last pose — on my back with my arms resting comfortably above my head — I had been there for three hours and now had to make an effort not to doze off.

And then it was over. Except not quite.

I threw my hoodie back on, not even bothering with the rest of my clothes, and invited the artists to show me their work. Some of them were just as self-conscious about showing their work as I had been to show my nether regions, but many were happy to let me take a peek, and one even let me grab a bunch to take home.

Looking at the sketches was jarring at first. Some made me feel beautiful and rich and complex and voluptuous. Others left me less sure. Is my brow really that furrowed? Surely that isn’t my stomach? I think I finally get that I will likely continue to fall in and out of love with my body over and over again.

But for now, I’m happily naked on the internet. And I love what I did. I’ve been at the mercy of my body almost my entire life, tiptoeing around it, spending an inordinate amount of time and money cloaking it, and in three hours, with nowhere to hide and under the scrutiny of 10 pairs of eyes, I took back ownership of it. Not only would I do this again (heck, I made $90) but I may even drag everyone I know with me. 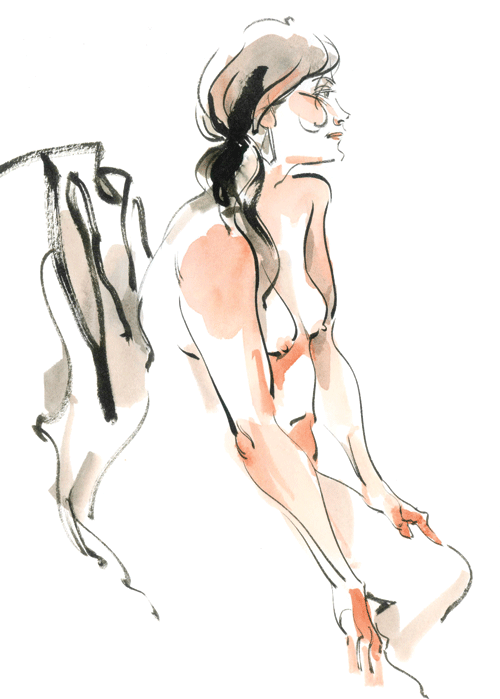