Surviving a plane crash: One woman tells her story 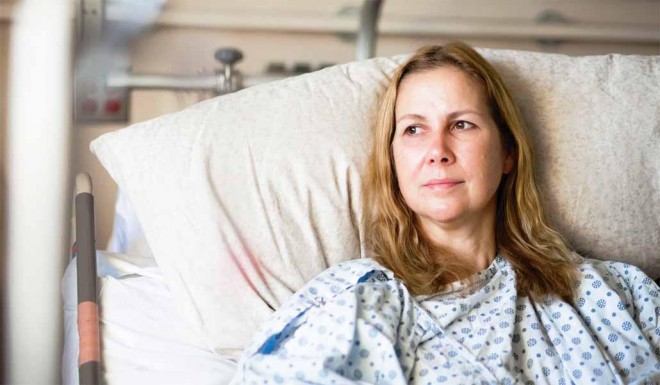 Carolyn Cross boarded a Northern Thunderbird Air flight to Kelowna, B.C., on the afternoon of October 27, 2011, looking forward to her weekend retreat. The 49-year-old mother of three runs her own company, Ondine Biomedical, and was going to share ideas and swap strategies with six other entrepreneurs. Sitting toward the back of the nine-seat plane, she had a kitty-corner view of the cockpit. “I have a very vivid memory of the pilot on takeoff, and he seemed to enjoy the lift. I was looking at the golden pinks and yellow of the sky. The sun was on his face and he leaned back, enjoying the freedom of flight.”

About 15 minutes later the pilot leaned over his shoulder to tell the passengers he was turning back to Vancouver airport because there was a small oil leak and it needed to be checked out.

Carolyn, a nervous flyer, noticed his hand was shaking, and it seemed they were climbing very high for a small plane. “It was a real pronounced shake, almost uncontrollable, and his hand was very whitish. It was enough for me to think, ‘Okay, we are in trouble.’ ” At that point she reached into her purse for her cellphone and began typing goodbye messages to her three kids — David, 15, Jamie, 11, and Julia, 9 — and her husband, Bob Cross, a successful oil and gas entrepreneur, who was in the United Kingdom on business. “I knew exactly what I wanted to say; I didn’t want to scare them and write, ‘Mummy is dying in a plane crash,’” she says. “Mummy loves Julia and Jamie” is the subject line on the email message to her two youngest.

To pieces. I will always be with you.
I will always watch over you
Be kind to each other
Be good at what you do
Be a good role model to others
I am proud of who you are
Love you forever
Mummy

The time of the message was 4:02 p.m. The crash occurred at 4:10 p.m. Once she was sure that her email and texts to her husband and eldest son were delivered, Carolyn says, she was filled with peace. She was prepared to die.“I had always been fearful of crashing to my death. Now I’m actually not afraid of that anymore. It’s rather odd. I had such a sense of peace up there.”

As the plane turned around to approach the airport, most of the passengers seemed oblivious to any problems. The guy in the seat next to her was chatting about his cottage. “Only when we banked really hard to the left did people understand we were in serious trouble. Shortly thereafter, I felt the sensation of weightlessness and realized we were dropping,” says Carolyn. “The last thing I remember is looking down and seeing this patch of green. I couldn’t tell how fast we were falling. But I knew it was a straight-down kind of thing.” Mercifully, Carolyn blacked out and does not recall the moment of impact.

“The next thing I knew, I smelled fuel and immediately jerked awake. I started yelling at the other passengers, ‘Wake up! Wake up! Get out!’ There was a wall of fire on my right.” The plane’s tail had been sheared off and the flames were closing in on her. Carolyn realized the twisted and dislodged seat that she was still buckled into was blocking the exit. “My seat had come out, and I was in the aisle.” She pulled herself free from the crushed metal, but when she tried to stand up, she couldn’t feel her legs. She found out later that the vertebrae in her spine had been compressed. “I fell down hard, which broke my teeth and smashed my head.” She managed to drag herself to the door, where she was lifted out and carried to safety by a bystander, Simon Pearce, who happened to be driving along the roadway with his wife, Kim. 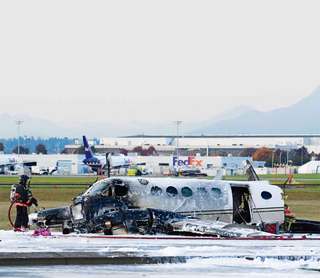 A pilot with Transport Canada who had been trained in emergency situations, Simon says he was simply acting on instinct when he jumped out of his car and ran over to the burning plane. But in Carolyn’s mind, Simon and the many other bystanders who rushed to rescue the plane’s occupants are heroes—and also survivors. “It takes a certain kind of person and a certain kind of madness to step into a burning fuselage that reeks of gasoline to rescue us,” she says. “My trauma on the plane was limited because it all happened so quickly and then I was out. These people had to go in there and pick and choose what they could and couldn’t do with flames approaching them. You don’t just walk away from that.” (Photo credit: Dana Low)

Carolyn found she was still clutching her cellphone. She pushed the button to call home and handed it to Simon’s wife, Kim, saying, “Please tell my family I’m okay.” She collapsed in pain and shock as she heard the conversation between Kim and her family.

The odds of surviving a plane crash vary widely depending on the size of plane (the smaller the deadlier), where it’s flying, stage of flight and so on. Carolyn’s list of injuries from being pancaked between metal and roadway is long: jaw trauma, broken ribs, a fractured pelvis, broken teeth, head trauma and a knee injury akin to having the bottom of your leg wrenched by a large animal.

Carolyn was rushed to hospital, where she underwent an operation on her leg and spent two weeks in recovery. Her rescuer, Simon, came to visit her there with his wife. “There is an energy about her that my wife and I both felt,” says Simon. “She is a force to be reckoned with.”

The pilot, 44-year-old Luc Fortin, was killed on impact, and his co-pilot, Matt Robic, 26, was severely burned and died of his injuries three weeks later in intensive care. But miraculously, all seven passengers survived.

Simon is still haunted by the crash and the death of the pilots, but with counselling he is getting back to normal. “My worst fear was being trapped inside a fiery aircraft.” He has since returned to the skies but says his first couple of flights were difficult, like learning to fly all over again.

Carolyn is consumed by her mission of getting her rescuers recognition. She gave several astonishing media interviews in the days immediately following the crash — “because I thought the media had it wrong.” To her, the story wasn’t about the crash or even the survivors. It was about the bystanders who risked their lives to help.

Survivor and crusader
Carolyn is known for her singular passion, and it is this gigantic drive that fuels her company. “You never make a bet against Carolyn,” says Nick Loebel, her chief technology officer, who has worked closely with her for more than 12 years. “It is not about luck, it’s indomitable force of will.” That’s what helped Carolyn haul herself to the door of the plane. “I realized I needed to get out and I closed my eyes to concentrate all my efforts to move to the exit,” she recalls. She feels she survived the crash for a reason: to bring her cheap, effective superbug-zapping laser to hospitals and clinics around the world.

The laser was originally developed to combat periodontal bacteria, but another near-death experience made Carolyn realize it had a much more expansive use: Her daughter, then two years old, almost died from a misdiagnosed antibiotic-resistant infection. “I was devastated. If I could have traded my life and limbs, I would have. It was the frustration of being able to put men on the moon, and here is this tiny little girl and this hospital and all these great people not able to do anything,” she recalls. “At that point, I became a champion for the antibiotic-resistance cause.”

The crash has intensified what she considers to be her life’s mission: bringing Ondine’s technology to hospitals around the world. Ondine’s concept is brilliant in its simplicity. When a special agent or liquid stain is applied to pathogenic cells like bacteria, and laser light is added, a powerful germ killer is created that doesn’t harm human tissue. Nick describes it as like “pouring bleach on the outside of the bug.” Because the bug doesn’t know it is being attacked and killed, it never has a chance to defend itself from its killer or, more importantly, to form a resistance. The result is a powerful, inexpensive and quick-acting alternative to antibiotics in the fight against superbugs.

Carolyn’s lofty goal is, simply, to change the way hospitals fight infections. By giving admitted patients a quick swab and a zap of Ondine’s laser in the nasal area (where many nasty bugs lurk, and the laser can easily reach), hospitals and clinics can block the bugs from entering the facility, spreading and turning lethal when they do not respond to today’s overused drugs. “There are barely any new antibiotics being created,” explains Carolyn. “It costs a billion and a half dollars to come to market, 10 to 15 years to get through the Food and Drug Administration; it’s way too much money and risk. So we’ve got an existing arsenal of antibiotics that are becoming more and more used and abused.” Changing the system sometimes requires a steamroller, someone like Carolyn, who refuses to give up. “There is a reason I was spared, and I know what it is,” she says.

In fact, rather than retreat to lick her wounds and reconnect with her family after the crash, Carolyn feels she has to work harder and smarter. “It kind of pissed me off, because I realized the company is so vulnerable to my health, and that’s not good enough.”

Picking up the pieces
Coming to terms with the horror of the crash has been hard on her husband. “He was away, and it’s always worse for a spouse when there is so much out of one’s control—the potential devastation to our family and way of life,” she says. “I think he has a renewed sense of the fragility of life and the importance of doing things that are meant to be done and not sweating the small stuff.”

In the same way fate seems to keep knocking on Carolyn’s door, she felt the benefits of her determination first-hand. After the crash, Carolyn was taken to Vancouver General Hospital (VGH), the first major institution to roll out Ondine’s technology. Like all patients undergoing surgery, she was zapped clean by Ondine’s laser. Carolyn was released from VGH on November 10, at 4:30 p.m., two weeks to the hour after she was rushed in. In a triumphant email sent from her hospital bed to her company, she wrote she was in good spirits, with a “newfound appreciation for how great it is to be getting back to a normal life.”

For Carolyn, that means returning to work and to her quest: the global fight against antibiotic-resistant superbugs—even if she has to get on airplanes to do it . “I have a very profound sense of my calling. My family understands that. I am more driven now than ever. I am determined to make a difference.”