Jessica Wynne Lockhart shares why she wants desperately to walk down the aisle — but not as a bride. 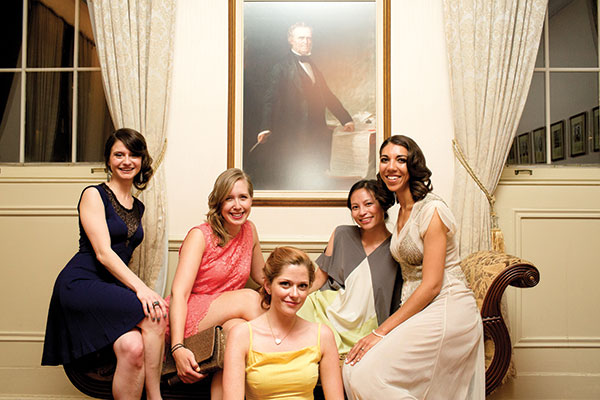 Carla is one of my closest friends. So when the invitation for her wedding arrived, I should have been thrilled. Instead, I felt a familiar pang of disappointment. For many women my age, the engagement of friends can be a harsh reminder that we’re still very much alone. But for me in particular, engagements are a reminder that at the age of 29, I’ve yet to achieve  bridesmaid status in a wedding party. Instead I’ve always been relegated to the role of drunken guest dancing inappropriately with the bride’s uncle.

This may seem trivial, but you should know that ever since I was a child I’ve coveted the flouncy dresses and handfuls of flowers that go with being one of the chosen ones walking down the aisle. Back then, I wanted nothing more than to be a flower girl. Unfortunately, by age six I was already past my prime and was forced to move on to another goal: becoming a bridesmaid.

But year after year, wedding after wedding, I continued to sit in the pews, watching my friends march toward commitment. I tried not to take it personally. I know that choosing bridal parties requires great diplomacy. It’s a decision often based on promises made in the second grade or familial obligations designed to keep the peace. It’s not necessarily about who is the oldest or closest friend.

I also know the pitfalls. Being in a wedding party can be more work than fun — and it’s expensive. My cousin Katherine, everyone’s go-to bridesmaid, estimates she’s spent $5,000 on weddings in the last two years alone.

I understood all of these things, but that didn’t make me want it any less. Just because you know it’s going to be a terrible party doesn’t mean you don’t want to be invited. As each wedding season passed, I couldn’t help but wonder if I’d ever be more than the peripheral female friend.

I began to think maybe there was something wrong with me. Perhaps none of my friends thought I was capable of spending my weekends creating Pinterest-inspired Mason jar table decor. (They may have a point. After all, even in high school, when they were all flipping through dog-eared wedding magazines, I was the one reading back issues of National Geographic.)

On Carla’s big day, all eyes were on the bride as she walked down the aisle, carrying a bouquet of peonies. But I was fixated on her two sisters. They looked beautiful in pale pink dresses that perfectly matched the interior of the reception hall.

Later that night, after the tables had been pushed aside, Carla tracked me down on the dance floor. “The next song is for you,” she said conspiratorially. Moments later, a familiar pulsating beat filled the room. I grinned. As Bonnie Tyler’s “Total Eclipse of the Heart” spilled from the speakers, I twirled in my yellow vintage dress, its skirt fanning out around me. There’s the wedding party and then there’s the wedding party. And even though I may never be a bridesmaid, I know that my friends will always trust me to keep the dance floor covered. Bring on the uncles.