How Cookbooks And James Barber Helped Me Find Fat Joy

Food media is rife with fatphobia—and it hindered my love of cooking for years. 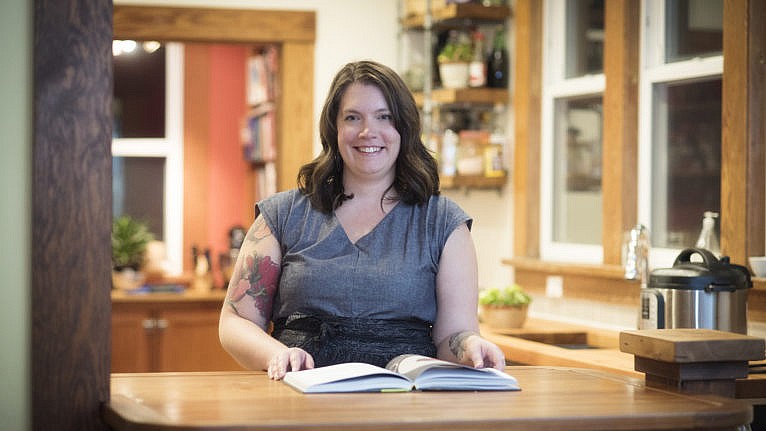 As a child, whenever my grandparents visited from Kelliher, Sask., I’d rush home from school, take my afternoon snack of whatever grandma had baked, and settle onto the couch with grandpa to watch The Urban Peasant, a cooking show on CBC. I’d only watched The Urban Peasant with him, and it became a tradition I looked forward to when they stayed with us in Victoria, B.C. to escape the cold Prairie winters. The effortless, carefree way James Barber approached cooking was captivating. To a kid whose favourite foods included Campbell’s tomato soup made with milk and fistfuls of crushed saltines, James was fearless; he added bags of dried shrimp to a soup or tinned ones to a salad. He talked about Mexican and Japanese dishes I’d never heard of and was suddenly excited to eat. “That looks pretty good,” my grandpa would say, sitting beside me. Until Barber, the only people I watched in the kitchen were my grandma, mom and dad. For them, cooking often seemed like a job or a responsibility, but on James’ face I saw joy and pleasure.

Up to this point, I had grown up believing I could love to cook and eat in equal measure. Then one day in the third grade, a single interaction fractured my relationship with my body and food. Before recess one day, a kid named Nico, who’d been my classmate since kindergarten, made a remark.

“Did anyone feel that?” he said. “Maybe it’s an earthquake.” Living in Victoria, B.C., meant always preparing for The Big One, but on that day the earth wasn’t shaking; I was the punchline. He could barely get the words out as laughter bubbled up. From that day on, he’d call me names like “Megaload” and “Sumo-Megan,” and his words changed who I saw in the mirror. I was a fat kid, and I learned, in a world that valued thinness. I was undesirable. The mythology constructed around fatness told kids, teens, and adults that their bodies were the result of a calories-in, calories-out calculation. The foods I enjoyed, like grilled cheese sandwiches, became forbidden. To eat them was a sign I wasn’t strong enough to control my unruly body.

I grew up surrounded by mixed messages about food. The cupboards were stuffed with cookbooks like The Moosewood Cookbook, The Silver Palate Cookbook and Company’s Coming. But like many homes in the ’90s and early 2000s, the kitchen counters were cluttered with Weight Watchers points calculators and pamphlets for Jenny Craig. I was in high school when I weighed in at my first Weight Watchers meeting, and by then I’d been counting points, calories, carbs, and grams of fat for several years.

My relationship with eating was strained, but my love of cooking grew from my family’s love of food and being in the kitchen. My mom scribbled recipes for dishes she saw on Barefoot Contessa, and my dad experimented with meals from the cookbooks my mom bought. In my late teens, an older woman told me, “The way to a man’s heart is through his stomach” and I took that to heart. For almost a decade, I’d make decadent brownies, handmade pierogies, and fresh ravioli with the goal of getting a boyfriend. With my first serious boyfriend, I spent hours making creamy mac and cheese and juicy meatballs to save a relationship I knew was falling apart. I was playing into two tropes as I cooked for others, especially men: the sexist responsibility of women to nurture and build a beautiful home; and, as a fat woman, I could enjoy food if it didn’t pass my lips.

As an adult, I bought expensive chef knives with the money I squirrelled away from minimum wage jobs. I collected cookbooks, starting with the Rebar Cookbook, later adding Breakfast Lunch Tea from the Rose Bakery in London. I experimented with combinations of hazelnuts, dried apricots and white chocolate in biscotti, and hosted dinners for friends and roommates where I served grilled spot prawns, bacon-wrapped rabbit, and porchetta-inspired pork tenderloin. I cooked for myself like I was doing math. If I ate a burger for lunch, I made a salad for dinner. If I skipped lunch, I cooked for hours making spaghetti and meatballs. I took the greatest joy in making food for others. The smiles and moans of delight were better than enjoying the food—or at least that’s what I told myself. 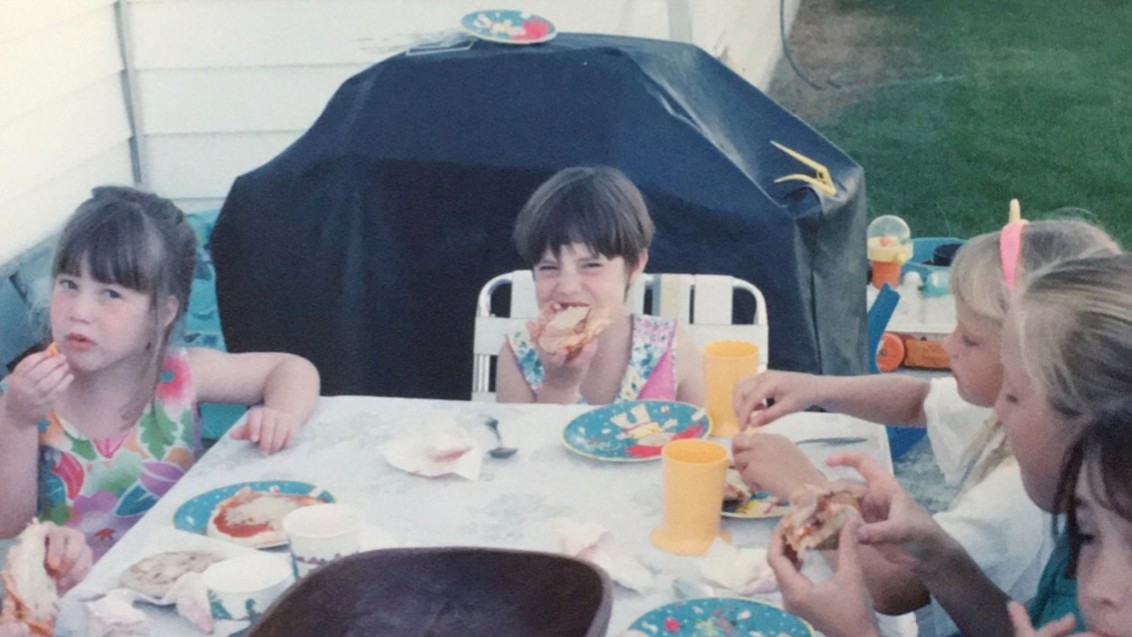 Fat stigma extends to cooking. As a mid-fat woman (fat activists created four gradations based on U.S. Women’s Clothing Sizes because experiences vary based on a person’s fatness), it’s often felt like I only have permission to enjoy cooking and food as long as I’m feeding my family and friends. Since Leave it to Beaver, women have been reminded that we should be good cooks, but I remember watching Monica on Friends—who, it had been established, had been fat in her teens and 20s— cooking for others. Her friends devoured and celebrated the food she made, but I don’t ever remember seeing her sit down to join them at the table.

Food media—my beloved James Barber, notwithstanding— has largely reinforced fat stigma’s abstract ideas of health. Cookbooks reflect celebrity culture by putting people on the covers instead of food. The person who made the cookbook often seems more important than the recipes themselves. And the person on the front—often thin and white—in their immaculate, modern kitchen creates a dream of who you could become, one recipe at a time. In 2021, Julia Turshen, one of my favourite cookbook authors, published a healthy comfort food cookbook titled Simply Julia. Her goal was to redefine “healthy,” a word often misused in the genre. “Cookbooks can affirm things without ever needing to be direct,” Turshen wrote in The Washington Post at the time. “Remember that cookbooks aren’t just things we read—they’re manuals for what we put into our bodies.” In cookbooks, this happens through things like suggesting chicken breast as a “healthy, lean protein” instead of chicken thighs, or zucchini instead of pasta.

But fat activists are working to remind us that health isn’t defined by specific ingredients or body size. On an episode of Turshen’s podcast Keep Calm Cook On, fat activist Aubrey Gordon said, “Cooking should be this sort of unfettered expression of love and joy. And I genuinely feel like our conversations about weight loss and our biases against fat people and against becoming fat ourselves … is just such a wet blanket, and obscures that love and joy that can and should come with cooking.” Fat people don’t see themselves represented in food media, which works to remind us that cooking isn’t something fat people should do.

The body positivity movement has pushed more open conversations about fat shaming and fat phobia into the public arena, but fat activists like Gordon—who is the author of What We Don’t Talk About When We Talk About Fat—note that while the range of “beautiful” bodies has expanded, it still often excludes disabled, large and very large fat, trans and racialized people. The movement has also been quick to celebrate victories without acknowledging the work done by Black activists, including Margaret K. Bass and Johnny Tillman, who were part of early organizing and activism around fat liberation. Fat activism goes beyond body positivity to demanding better access to health care, wage equity for fat people, and that society recognize the sometimes-daily harassment and abuse large fat people face.

Four years ago, I started a new kitchen habit. I’ll set the timer on my camera, pose in my kitchen and then post the photo on Instagram with a pithy comment related to my mood and my outfit. These pictures appear alongside bubbling lasagnas and glistening chocolate cakes. Though I share the pictures on social media, the act itself—taking the photo, writing the caption, posting—is more for me. According to anti-fat stigma and rhetoric, fat bodies should be hidden, not celebrated. I’ve lived with the weight of those words on my hips and stomach, my back and thighs since I was a kid, and it was exhausting. I didn’t want to cover myself anymore or treat my body as a source of shame. Since then, I’ve become known in my online community for these kitchen portraits.

When I think of those afternoons on the couch with my grandpa, I can’t remember what James Barber was making, but I do remember his smile. He radiated a feeling of great happiness. It didn’t matter that he zested a lemon wrong or cut his finger; he was joyful. As a kid, I didn’t see that cooking could be a gesture of love, but it has become that since. When I step into the kitchen, pull ingredients from the fridge and cupboards, cooking isn’t just about feeding my family. In a fat body it’s an act of rebellion. It’s an expression of joy.