Imagine using leaves because you can't get feminine pads

When Rita Natalaga first got her period, her aunt told her she was going to have to stay home from school until it was over. Like Rita, millions of girls in rural Africa have nothing but leaves and scraps of cloth to get them through their periods. 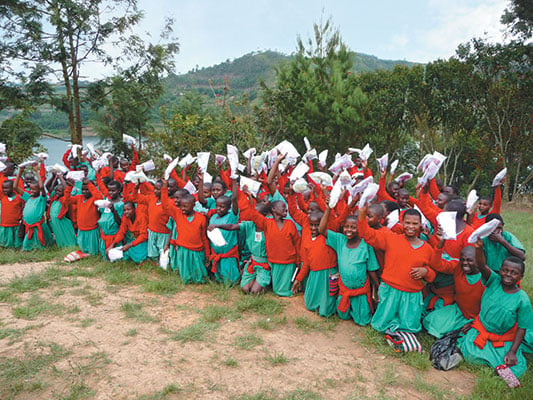 “I was so scared,” says Rita. “I’d never heard about this happening. I had no choice but to pull out an exercise book and tear out a page,” she says, standing in the scorching school playground and speaking through a translator. “Then a friend gave me a sweater, and I tied it around my waist.”

Research shows one in 10 African girls skip school during menstruation or drop out entirely because they don’t have access to sanitary pads or tampons. “Women and girls use paper, leaves, old clothes and other materials, which are unhygienic and cause infections, leaking and loss of confidence,” says Anthony Jjuuko, the part-time headmaster of St. Matthew Katimba primary school in the Sembabule district of Uganda .

He recalls seeing a girl in his classroom with blood leaking down her legs being teased by boys. The distressed student, 15, dropped out of school. Sanitary products do exist in Uganda, but they are prohibitively expensive and often hard to find outside the capital, Kampala. The majority of dukkas (small shops) on the dirt roads in the countryside don’t stock any. Tampons are hard to find even in the city, and most rural women have never heard of them.

Even visitors to Uganda can find themselves caught short, which is what happened to Sophia Klumpp. Five months after arriving in Uganda to volunteer with a community development project, the 26-year-old McGill graduate had her own emergency and struggled to find pads. It was a problem she hadn’t encountered before. “I’d backpacked all over the world, and I’d never thought about how women and girls in developing countries cope when they get their periods,” says Sophia. 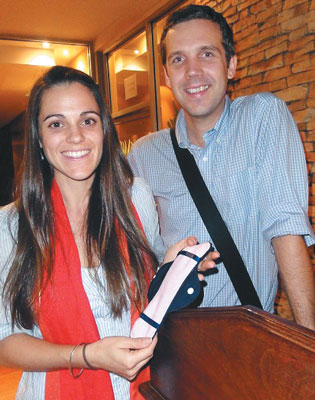 One day at work, Sophia and her partner, Paul Grinvalds, were visited by a graduate student they’d met, Carrie-Jane Williams. They got to chatting and Carrie-Jane showed them some washable cloth Lunapads (Canadian ecofriendly sanitary products) she’d brought with her to distribute to Ugandan girls. Inspired, they organized an impromptu chat that afternoon with a few village girls about menstruation and showed them the Lunapads.

The experience started Sophia and Paul thinking. A month later, in January 2009, the couple decided to make their own version of the Lunapad. With the help of a local tailor, 22-year-old Hamidah Nakiyemba, and two sewing machines, they rented a tiny room in a village and embarked on a six-month pilot project. They worked long hours, sitting on the floor, with Sophia tracing the fabric, Paul cutting the pieces and Hamidah sewing the pads.

Two months into the project they started feminine hygiene talks at local schools, explaining to the students how the cloth pads worked. “The girls’ reaction to the product was the tipping point, the beginning, the revolutionary moment for me and Paul,” says Sophia.

A few weeks later the headmistress of a government boarding school heard about the project and asked to meet Sophia and Paul. The girls at the school had been pulling pieces of foam out of their mattresses and using them to absorb their menstrual flow. “The students blamed the torn mattresses on rats,” says Sophia. “There wasn’t much the headmistress could do, because most of the girls’ parents couldn’t afford pads, and she didn’t have the finances to supply the school.”

However, the parents could afford the pads Sophia and Paul were making. By June the workshop had expanded to three tailors and two cutters. “I’ll never forget the morning when Hamidah opened the doors and found a girl her age waiting outside,” says Sophia. “The girl told Hamidah, ‘I heard you’re making cloth pads; I want to buy one,’ and I thought to myself, ‘Wow, this might really work!’ ” 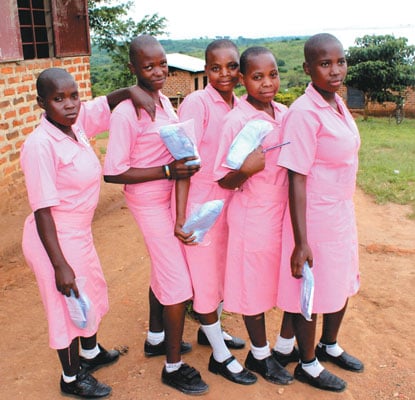 Sophia and Paul have now been running Afripads for just over four years. They manufacture low-cost washable cloth pads that last up to a year and cost 30 percent less than any alternative. They’re sold across Uganda, and more than 100 NGOs distribute them to girls in need across Africa, from Kenya to Sierra Leone.

“Afripads is about so much more than sanitary pads,” says Sophia. The company tries to have a positive effect on every level: It employs local women in rural areas, to drive rural industry as well as give practical skills and financial independence. Last June in Paris, Sophia and Paul won the Social Entrepreneurship Award from Kering Group (formerly PPR Foundation, the luxury group behind such names as Gucci, Yves Saint Laurent and Stella McCartney).

“Every day we are demonstrating the power of a simple innovation to transform lives. We’ve reached over 150,000 women and girls so far. We’ve faced a lot of challenges, but this is what fuels our passion and keeps us going.”

For the past three years, headmaster Anthony Jjuuko has been organizing reproductive-health talks for the girls at his school. Now he is thrilled to be able to give out free samples of the pads.

Goretti Nasolo, 14, who has used papers and rags since her first period, is excited about taking home an Afripad. “I’m happy to have learned about this,” she says, clutching the pale pink and blue pads. “I will tell my family about them. I think if I can teach my sisters about this, they’ll be able to help themselves and they won’t have to use old paper. With Afripads I will no longer miss school because of menstruation. I will be able to walk confidently and be sure that I don’t smell bad. No one will know I have my period.”

Click here to find out how to support Afripads.