The Two Questions I Want To Ask Federal Leaders

'Every single party, to varying degrees, appears to be in denial that this country is in the midst of two major crises: genocide and ecocide.' 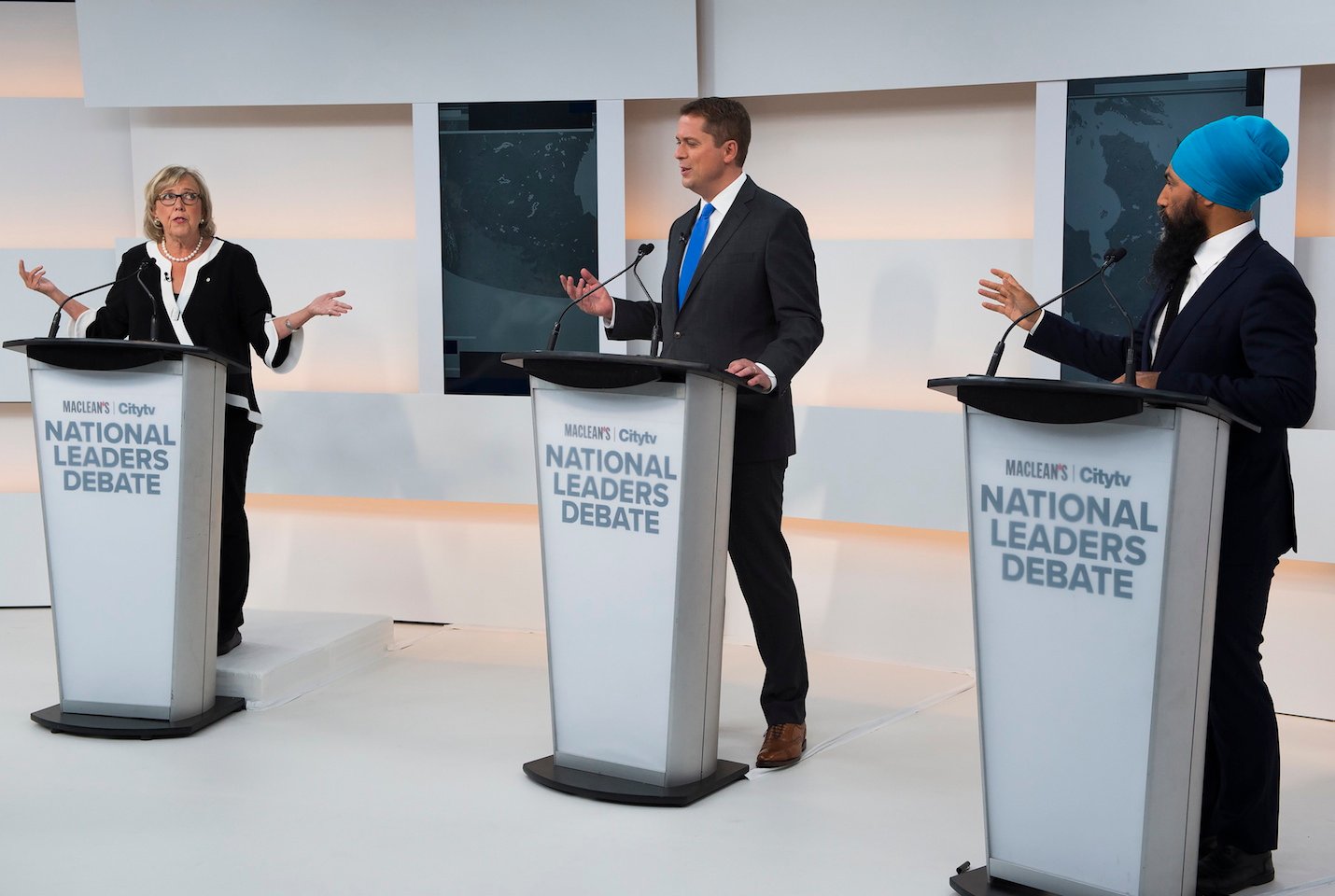 This federal election is unfolding as though we’re living in a vacuum—as if this election were happening in the same old status quo context that Canada has enjoyed for the last 150 years. The focus, once again, is on the usual issues: jobs, taxes and the so-called “middle class.” While climate change is one of the key issues on voters’ minds, the parties are acting as though we still have decades to iron this all out, when we need radical and even uncomfortable action—immediately.

Every single party, to varying degrees, appears to be in denial that this country is in the midst of two major crises: genocide and ecocide. To be campaigning to the middle class, while Indigenous peoples and the planet are dying before our eyes is unconscionable. Considering Greta Thunberg, a 16-year-old child, has inspired millions worldwide to protest and pressure their governments to take real action on climate change, I am astounded that Canada’s party leaders continue to be so blinkered.

The first federal debate was as disappointing as the party campaign platforms. The host asked predictable questions that betrayed the urgency of our situation. These debates have long ignored Indigenous peoples and grassroots perspectives. Which is why I would like to host the next debate and ask the tough questions of greatest concern to Canadians and Indigenous peoples. As host, I could ensure that none of the party leaders side-step the questions and actually address the issues with the gravity and urgency they require. (In fact, after the Leaders’ Debate Commission invited Maxime Bernier, leader of the so-called People’s Party of Canada—a party that according to the polls has little chance of electing anyone—to participate in its French- and English-language debates on October 7 and 10, I created a hashtag on Twitter #invitepamtothedebates).

Here are the questions I would start with:

What’s your comprehensive plan to accept responsibility for, end and make reparations for genocide in Canada?

In June, the National Inquiry into Murdered and Missing Indigenous Women and Girls found Canada to be guilty of both historic and ongoing genocide. Genocide is the most profoundly immoral and devastating crime that can be committed by a state against a group of people. The high rates of sexualized violence, exploitation, disappearances and murders of Indigenous women and girls, has been laid directly at the feet of all levels of government in Canada, which created, reinforced and maintained racist and sexist Canadian laws, policies and practices that violate human rights. Of the 231 recommendations made by the inquiry, the most important one was the call for an urgent national action plan to stop genocide and to make reparations for its victims. Yet, on the campaign trail, no one has outlined a comprehensive plan to end genocide against Indigenous women and girls with the exception of Elizabeth May’s Green Party, which committed to implement all the recommendations of the report.

The NDP’s Jagmeet Singh came out early and accepted the inquiry’s finding of genocide, but his platform refers only to ending discrimination and is silent on how this would be achieved. Pre-campaign, Trudeau’s Liberals agreed to respond to the inquiry sometime in the future, but their election platform appears devoid of such a plan. On the other hand, Scheer’s Conservatives and Bernier’s People’s Party outright deny that Canada is guilty of genocide. The Bloc Quebecois has been notably silent on the issue.

Meanwhile, Indigenous women and girls continue to be abused, exploited, trafficked, disappeared and murdered at rates many times that of Canadian women. They continue to be subject to forced and coerced sterilizations, over-representation in prisons, sexually abused by police officers and prisons guards, have the highest rates of child apprehensions and are the number one target of human traffickers. Yet, Canada has no plan to end the genocide.

What is your comprehensive plan to address climate change within the urgent timelines required?

Through its destructive environmental laws, policies and practices, Canada has contributed significantly to the global climate change emergency. In fact, if you count up all the carbon this country has released since 1850, we’re ranked tenth of the world’s biggest emitters, says environmental scientist Katharine Hayhoe. If that wasn’t bad enough, the recent governmental report Environment and Climate Change confirms that temperatures have been rising twice as fast in Canada as the rest of the world, with the Arctic hit the hardest. We’re seeing the effects of it already with severe weather, floods and droughts across the globe, and  Indigenous and impoverished peoples are often the most affected. It’s also important to remember that Canada’s extractive industry, which has had devastating environmental impacts on the lands, waters, plants and animals, has also been linked to the high rates of violence, disappearances and deaths of Indigenous women and girls near development sites. Canada’s mining industry for example, is one of the most sexually violent and lethal worldwide. Both the federal government and industry groups like the Prospectors and Developers Association Canada have noted, Canadian mining has a major human rights problem.

Climate change will eventually affect everyone, including the middle class and ruling elites. Addressing the climate emergency requires an urgent, crisis-level national action plan that is targeted and comprehensive, which includes a massive overhaul of Canada’s laws, policies and practices. Sacrifices will have to be made by everyone, be it issuing carbon taxes, funding renewable energy, providing job retraining for those who work in the non-renewable energy industry and changing our agricultural practices. We know this will be hard—it requires a massive change to our way of life. However, the most difficult task will be getting the current ruling elite and their political parties to open their eyes and make these election issues.

Up until now, this election has just been business as usual. All parties have failed to address these two national crises in any substantive, and most importantly, public way. It’s urgent that we understand we can’t do politics as usual any longer—people are dying and so is the planet. Issues like the economy, manufacturing, international trade and technology are important, but a responsible plan for those issues cannot be developed outside the reality of the emergencies before us. Everything about Canada’s federal spending and future planning must be tied together. Election campaigns that target their so-called voting base leads to governments that only serve their like-minded constituents while ignoring the legitimate needs and concerns of others (who are often the majority). Similarly, federal election debates, which isolate issues from their underlying root causes (for instance, how immigration is often related to climate change) don’t give Canadians the proper context from which to judge the better policy overall.

It is disappointing that the national debates are unlikely to address any of these real issues—especially now that Maxime Bernier has been invited to attend as leader of the People’s Party of Canada, even though his support is currently hovering at less than three percent. His inclusion not only makes a mockery of the election debates, but risks turning it into a carnival sideshow—yet another distraction from the real conversations we should be having about the future of this country. Even worse, his inclusion in the debates helps normalize climate deniers, genocide deniers and those who dismiss the basic human rights of Indigenous peoples, women, and immigrants. There is also no counterbalance to such extreme views—not in the parties or in the debates.

Canada can do better in this election—our collective future depends on it. It’s long past time we started talking about the biggest issues facing this country. If others won’t ask them the tough questions, let me.

Dr. Pamela Palmater is a Mi’kmaw lawyer and member of Eel River Bar First Nation. She is a full professor and Chair in Indigenous Governance at Ryerson University.

Clarification: On October 8, this piece was amended to reflect that there was only one host at the first federal debate, and edited to clarify that the Leaders’ Debate Commission invited Maxime Bernier to attend its debates on October 7 and 10.