Are You Inadvertently Supporting Trump’s Re-Election?

Many U.S. companies that operate or sell their products in Canada either directly or indirectly support President Donald Trump. 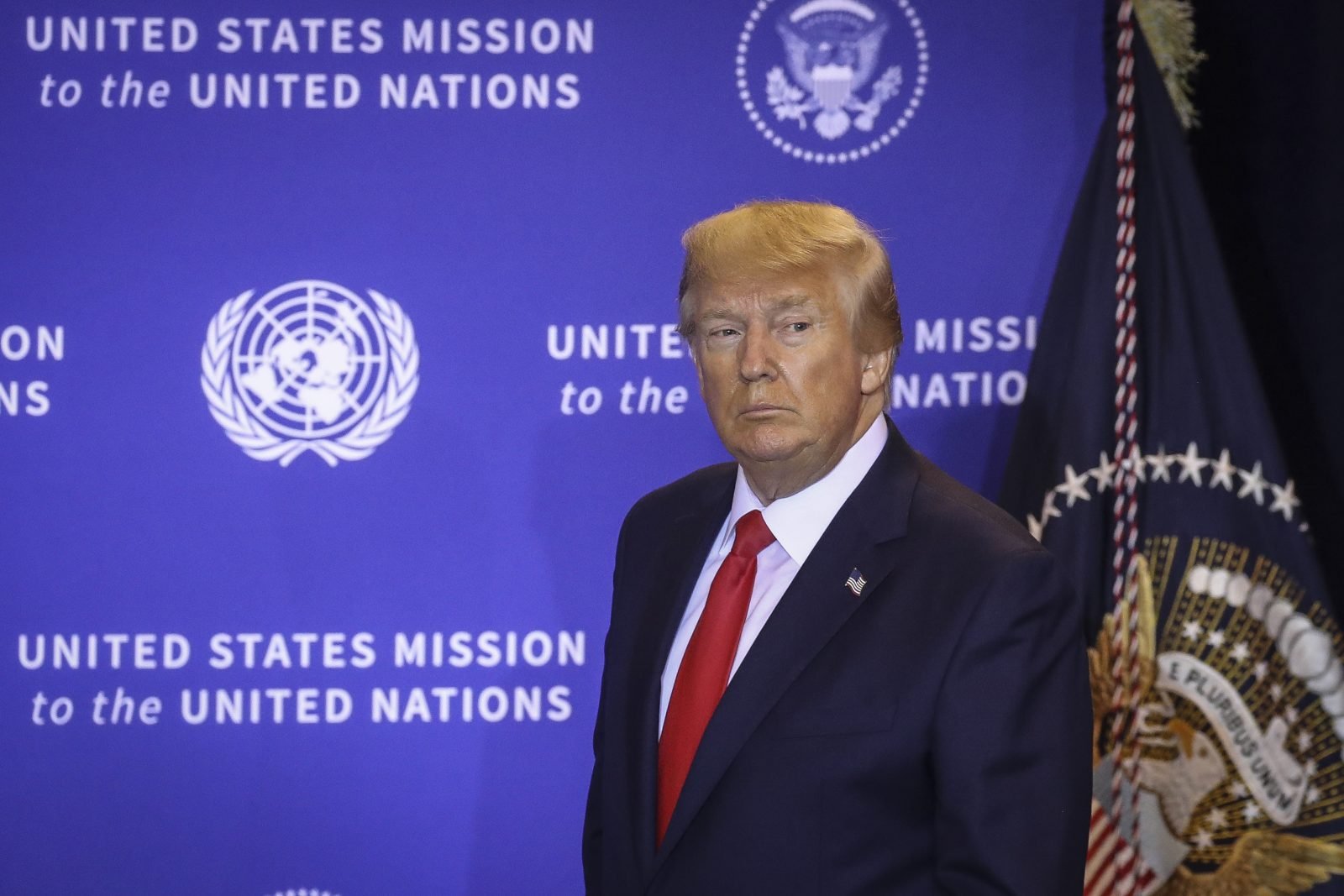 Last summer, the internet went into boycott mode after it was revealed that American businessman Stephen Ross was throwing a $250,000-per-ticket fundraiser to raise money for U.S. President Donald Trump’s re-election campaign, reportedly collecting around $12 million. Ross, who has a current net worth of approximately $7.6 billion, is an investor in dozens of well-known companies including Equinox, the upscale gym chain, and Soulcycle.

As the 2020 election approaches, more and more businesses are announcing their opinions on Trump, some through their social media and others with their wallets. Ross is far from the only tycoon whose politics are prompting protests—a surprising number of businesses are financially tied to the 45th president in some way.

And a lot of them operate in Canada, too. Here are 19 U.S. brands with a Canadian presence that donate to Trump’s campaign

Earlier this month, Robert Unanue—the Spanish-American CEO of the popular Latin American food brand—visited Donald Trump at the White House and declared that America was “truly blessed” to have him as president. This led to significant backlash from the Latin American community, including calls for a boycott from both Hamilton creator Lin-Manuel Miranda and Representative Alexandria Ocasio-Cortez. Despite the furor, Unanue refused to walk back his praise during a subsequent appearance on Fox News. First Daughter Ivanka Trump later tweeted a photo of herself holding a can of Goya beans, along with the brand’s official tagline: If it’s Goya, it’s got to be good—a potential ethics violation for the White House official. Not to be outdone, President Trump later posted a photo of himself with a full range of Goya products on Instagram. (Also worth noting: Unanue is a Republican donor, but to a relatively modest extent.)

If it’s Goya, it has to be good. Si es Goya, tiene que ser bueno.

Last summer, Home Depot co-founder and former CEO Bernard Marcus announced he would support Trump’s 2020 re-election campaign, having already donated $7 million in 2016. The Canadian arm of the company was quick to point out that Marcus had been retired from the company for more than 15 years and has since tried to highlight its support for progressive causes. While it’s true that Marcus last held an official position with the brand in 2002, the 90-year-old billionaire says most of his personal wealth is tied up in Home Depot stock. There are over 180 Home Depot stores in Canada.

High-end gyms SoulCycle and Equinox have distanced themselves from Trump in the past, claiming that “no company profits are used to fund politicians.” But the fact remains that the lifestyle-focused exercise chains are majority-owned by Ross’ RSE Ventures, reportedly bringing in over a billion dollars a year. They have locations in Toronto and Vancouver.

One way that companies can display support for a political campaign is through a political action committee, or PAC, which is a group formed to support and fund a particular candidate. TACO PAC, described as a way to provide “quick-service franchise restaurant operators with an easy and effective way to participate in the political process,” is a collection of  U.S.-based Taco Bell franchisees who made the maximum donation to Trump’s campaign in 2016. Though it has yet to donate to the re-election campaign, TACO PAC has a long history of supporting Republican causes, and one of its major franchisees has made large personal donations. (This specific franchisee also owns significant numbers of Pizza Hut and Wendy’s franchises in the U.S.)  Taco Bell has over 20 franchises across Canada, although Taco Bell Canada has stated it does not donate to political campaigns and cannot control donations made by franchisees.

One company that doesn’t shy away from its link to Trump is World Wrestling Entertainment (WWE), owned by Linda and Vincent McMahon. The McMahons have been enthusiastic supporters of Trump for years, throwing some $6 million towards his initial run for the presidency in 2016. Linda was Trump’s pick to lead the Small Business Association, but she stepped down to lead a Trump re-election PAC, to which she’s already contributed more than $300,000. WWE holds events across Canada and has an exclusive pay-per-view agreement with Sportsnet 360.

Trump also has allies in the Ultimate Fighting Championship (UFC). President Dana White is a fervent supporter and friend of the president, but it’s Frank Fertitta III, owner of the limited liability company that runs the UFC, who has given the most to his campaign. Fertitta III, and current UFC CEO Lorenzo Fertitta contributed a million dollars each to a super PAC that supports Trump’s re-election, and made rolling personal donations in 2019 to the tune of $700,000. UFC is aired on pay-per-view channels across Canada.

The Molson Coors Brewing Company PAC and related individuals have made donations to many Republican causes and candidates, but the brand has been under extra scrutiny for the political leanings of Pete Coors, its former chairman. Coors is a top individual contributor to Republican causes and personally gave thousands to Trump’s election campaign, as well as throwing him a fundraiser back in 2016. Molson Coors has a number of subsidiaries with a Canadian presence, and a stake in Ontario’s The Beer Store.

It might not be a household name, but shipping and office supplies company Uline is a huge business, bringing in a revenue of an estimated $5.7 billion per year. The owners, Elizabeth and Richard Uihlein, are quiet but steady Trump supporters, donating over $500,000 to his inauguration and fundraising for his campaign in 2016. They’ve already given $2.5 million to conservative PACs ahead of the 2020 election, and at least $750,000 to Trump-specific PACs in 2020 alone. Uline has warehouses near Toronto and Edmonton and provides core business supplies for many Canadian companies, from office chairs and packing boxes to safety vests and industrial light bulbs.

Snapchat is another company that links back to Stephen Ross—the start-up is one of the crown jewels in venture capital firm Vayner/RSE’s portfolio, which is partnered with RSE Ventures. Vayner’s CEO, Gary Vaynerchuk, has distanced himself from Ross’ politics online—and actually donated to Hillary Clinton’s 2016 campaign— but he does seem to enjoy hanging out and talking sports with the conservative billionaire. Snapchat has a global reach and is regularly used by Trump himself.

As a company, New Balance has flip-flopped on Trump depending on how his trade tariffs affect it, but owner and chairman Jim Davis is more settled in his support, donating nearly $400,000 to his 2016 election campaign.

Marvel has boycott supporters divided. While chairman and former CEO Isaac Perlmutter is a large individual donor to Trump and Republicans, giving over $360,000 to a Trump fundraising committee, he no longer directly oversees much of the company. Boycotters suggest contacting Marvel directly to encourage them to cut ties with their chairman.

The political situation at Estée Lauder has been especially fraught recently. Ronald Lauder, heir to the makeup giant and current board member, believes Trump to be a “man of incredible insight and intelligence,” and has donated almost $1.6 million to his political efforts in total. In late May, the company contacted its employees expressing general support for the racial justice movement in the U.S., suggesting they take part in Blackout Tuesday and pledging to donate $1 million to racial and social justice causes. Employees were quick to point out the hypocrisy from a company directly associated with such a vocal Trump supporter, and following a petition calling for Lauder to be ousted from the board, Estée Lauder upped its donation to $10 million over three years, though Ronald Lauder remains in place. Estée Lauder is sold across Canada, and also owns M.A.C, Bobbi Brown and Clinique, as well as more than 20 other makeup, skincare and perfume brands.

One of the major stakeholders in Revlon is Ronald Perelman, a 77-year-old billionaire who gave $125,000 to the Trump Victory fundraising committee in 2017. Perelman’s daughter, Debra Perelman, is the current CEO of the Revlon company, which also owns the Almay and Elizabeth Arden brands, among others. Revlon products are found in stores and pharmacies throughout Canada.

Australian company Bluestone Lane Coffee is another member of the RSE Ventures family, with locations across the U.S. and one in Toronto.

The prepster company is part-owned by Linda Bean, granddaughter of OG founder Leon Leonwood Bean. Linda got in trouble with the FEC for exceeding the personal donation limit to Trump’s 2016 campaign, to which she has donated many thousands of dollars. L.L. Bean tried to distance itself, but Trump’s personal shoutout to the company four days’ after its statement—which encouraged people to “buy L.L. Bean”—somewhat undermined the company’s claim that it wants to “stay out of politics.” L.L. Bean opened a Canadian flagship in Oakville, Ont. in 2019.

The Formula One Group oversees all Formula One operations, including the annual Canadian Grand Prix held in Quebec. It’s 100 percent owned by Liberty Media, which is a company that doesn’t lack for Trump donors—chairman John Malone and CEO Greg Maffei gave personal and company donations to his inauguration that totalled $1M. Malone has made it clear that he hasn’t changed his mind about the president, sending thousands in support over the past year.

Restaurant chain Momofuku is primarily owned by celebrity chef David Chang, but Stephen Ross’ RSE Ventures has a minority stake. Since the backlash against Ross-owned brands began, Chang has pleaded with Ross to cut ties with Trump. Momofuku and offshoot Milk Bar have locations in Toronto.

The dating and socializing app—which has built its brand on feminism and female empowerment—might not seem like an obvious company to link back to the current U.S. president. Bumble’s parent company MagicLab sold a majority stake to the Blackstone Group in late 2019, whose CEO Stephen Schwarzman is a loud and proud Trump supporter. Earlier this year, Schwarzman gave a whopping $3 million to a Trump Super PAC, alongside countless other Republican donations. He’s also a respected friend and personal advisor to Trump and has advised the president on foreign policy as well as coronavirus response. Bumble reportedly has four million users in Canada.

In July, the Swedish oat milk brand Oatly sold a $200 million stake in the company to a consortium that includes Blackstone—the same from the Bumble deal, headed by diehard Trump supporter Stephen Schwarzman.