This tireless craft maven is building entire worlds out of little more than paper and glue. 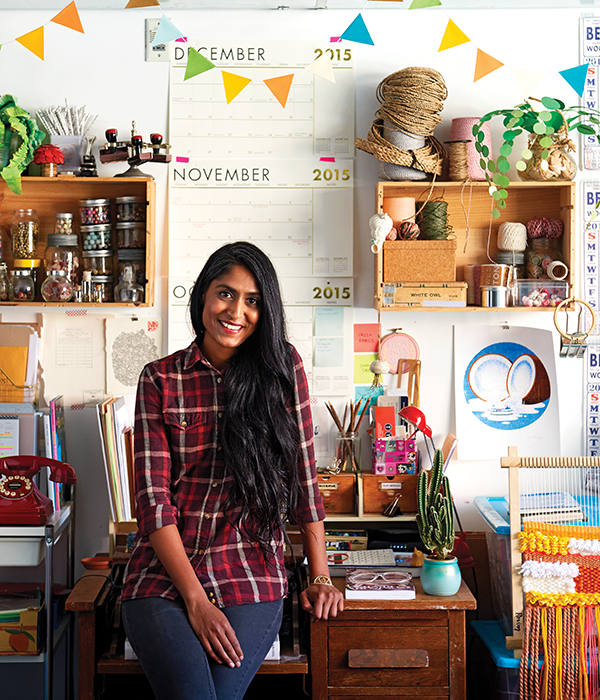 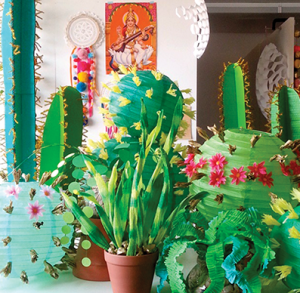 A lime-green and gold-spiked cactus garden sits in a vintage-furniture shop in Toronto’s west end. Further south, hundreds of paper clouds hover above illuminated high-rises on a theatre stage. A little east, in a bookstore’s front window, five octopi beckon with glittering tentacles from a dreamy under-the-seascape. Once you start looking, you can find Kalpna Patel’s charming, perfectly Instagrammable works all across the city — entire worlds fashioned out of paper and glue. In December, she brings her expertise to City of Craft, one of Toronto’s largest independent craft shows, filling a 100-year-old building to the rafters with gorgeous creations. And this year, she also happens to be running the whole shebang.

A philosophy major who’s been crafting for ages, Patel got her official start at the first City of Craft show in 2007, selling jewellery and stationery. She soon handled the event’s decor, stringing up intricate doilies one year and paper bunnies the next. “It was a fun community thing that grew and grew, and decor was my way of making the show look better,” Patel says. “But it led to window displays and event decor, because I had experience decorating huge spaces.”

By 2012, Patel was putting together displays for Type, the Toronto bookstore where she works part-time (“Oh, you’ve got to have a day job,” she says). Since then, she has helped revitalize Scarborough storefronts with window installations, “showing there really is art and culture in the suburbs.” She made paper candles and cake for Margaret Atwood’s 75th-birthday party. Working with collaborator Sean Martindale last summer, Patel turned 1,500 pounds of cardboard into a 425-square-foot box fort for the Pan Am Games, using panels decorated by elementary students across Ontario that promoted diversity and inclusivity in sport.

Related: 20 ways to get your holiday craft on

Although budget is always a concern, Patel prefers using low-cost materials because they show “what’s possible with such simple things after a little bit of effort,” she says. Patel’s parents, who immigrated to Canada from India in the ’70s, worked long hours for low pay at factories, her mother doing piecework and her father making parts for airplanes. “It feels strange to me to really enjoy a job,” she says. “I think I reconcile it by keeping my work accessible. If my mom walked by a storefront and saw what I was doing, she’d get it. I like that I can make things that people with a wide range of experiences can appreciate.”

Though Patel tried to carve out a vacation this summer, she spent most of it organizing December’s City of Craft. “It’s important to me to give makers a platform for their work,” she says. “Five thousand people come through the door.” But she admits she has a tendency to take on too much: “I do work alone and it can be exhausting — I figure out one form and duplicate it a few hundred times.” That purely physical, repetitive action can start to feel awfully like factory work, the exact thing Patel’s parents didn’t want her to do. “But it’s nice to say I can actually feed and house myself by doing this. I never feel like I’m flaking out.”

Check out City of Craft in Toronto, December 11-13.