From music festivals to 1950s CIA mind-control experiments, this visual artist is never short on inspiration. 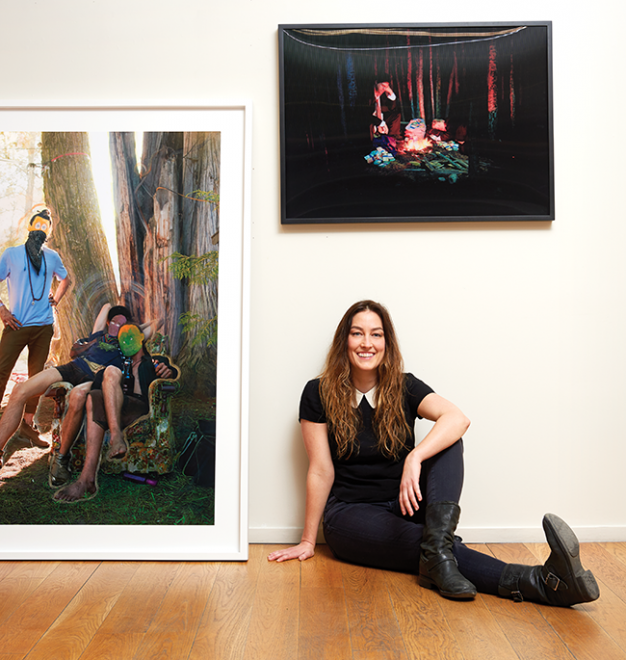 Sarah Anne Johnson likes to joke that she approaches her art like a typical diplomat. “I always see both sides. Whenever I come up with an idea, I want to show it from at least a couple of different perspectives.” In her work, that translates to slathering photographs in technicolour glitter, choreographing strange modern dances and building surreal dioramas. “Maybe it’s a bit of ADD,” Johnson says. “But part of what I love about art is seeing what these hands can do.”

Both the Canadian and international art worlds think those hands can do plenty. The Guggenheim Museum in New York, the Art Gallery of Ontario in Toronto and Ottawa’s National Gallery of Canada have all shown her work. And last year, she was shortlisted — for the second time — for the Sobey Art Award, the country’s most prestigious prize for homegrown artists under 40.

Johnson’s original focus, though, was theatre: She studied acting in New York in the early ’90s, returning to Winnipeg three years later, unemployed. Her parents urged her to enrol in a few university classes, so she signed up for art courses. “They were like, ‘That’s your backup plan? Fine art?!’” Since then, she has hitched a ride on an Arctic sailing ship for her haunting photo series “Arctic Wonderland” and built an illuminated fireworks sculpture for the Winnipeg Art Gallery’s centennial.

For the 2015 Sobey, Johnson created Hospital Hallway, a claustrophobic, disorienting space where viewers feel a loss of body and mind. It was inspired by her grandmother’s connection to the U.S. Central Intelligence Agency’s mind-control program MKUltra, where dangerous experiments were performed on unaware American and Canadian patients in order to develop new interrogation techniques. In the 1950s, Johnson’s grandmother sought treatment for postpartum depression; instead, she was subjected to LSD injections and electric shock treatments. Three decades later, she spearheaded a class action lawsuit against the CIA. “It’s a really important piece of Canadian history and my family history,” Johnson says.

While working on Hospital Hallway, Johnson was also finishing “Field Trip,” a photo series about the outdoor music festivals she attended in her 20s. In the photographs, showing this month at the McMichael gallery in Kleinburg, Ont., trees and lakes turn fluorescent purple and turquoise with a little help from Photoshop, while festival-goers are sprinkled with glitter and painted with cartoon faces. It points to her decision, made early in her career, never to let the limitations of photography stop her from creating the art she dreams up. “I didn’t want to only be able to take photographs. I just wanted to make work all the time: whatever, whenever, wherever.”