This young chef’s serious charcuterie chops are the talk of Cowtown. 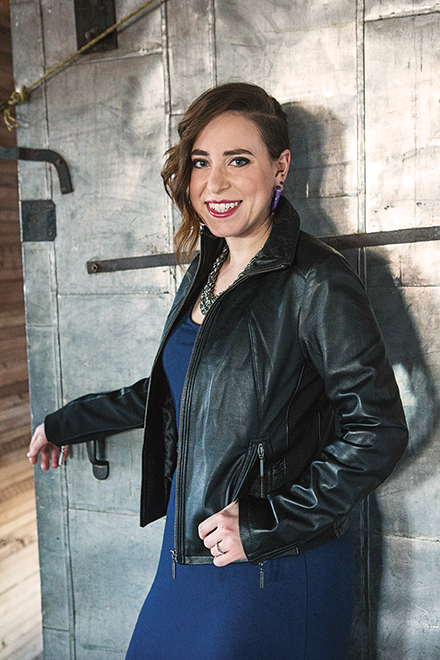 Jessica Pelland is pretty comfortable with a shiny cleaver in her hand. She can butcher an entire animal, breaking down a cow into everything from a classic rib-eye to beef-tongue pastrami. Last year, her skills with cuts and charcuterie helped the 28-year-old take home the $10,000 prize on an episode of Food Network’s Chopped Canada. Now, she’s set to open Charbar, an Argentinian-inspired eatery in the heart of Calgary.

Jessica established her reputation at the award-winning Charcut Roast House, learning from co-owners and chefs Connie Desousa and John Jackson, who assembled a stellar crew of female chefs, then tapped Jessica as the executive chef and co-owner of their new outpost, Charbar. Opening this spring in Cowtown’s burgeoning East Village, the seafood- and beef-focused restaurant is housed in a historic former warehouse alongside fellow tenants Phil & Sebastian Coffee Roasters and Sidewalk Citizen Bakery. “We’re trying to create a hyper-local, made-in-Calgary vibe,” Jessica says about the space.

At Charcut Roast House, diners dig into beef heart, bone marrow and pig’s-head mortadella. She’ll apply that same head-to-tail approach at Charbar, where the proximity to the Bow River provided inspiration to expand beyond flesh to fish. The raw bar will offer dishes like shrimp ceviche with toast, accompanied by fried rosemary and cancha (Peruvian corn).

Cooking with ingredients like cancha is relatively new for Jessica. Her first job, right out of high school, was at an all-day family restaurant. “I peeled 150 pounds of potatoes a day,” she says. “A lot of people would think that’s a terrible job, but I found my calling.” Eventually, she landed a position at the University of Calgary, cooking for its campus bars and catering banquets. At the same time, she enrolled in the cook apprentice program at the Southern Alberta Institute of Technology, where she was introduced to whole-animal butchery, a skill that would serve her well at Charcut. “When I started, I would go in on my own time to help break down a pig and learn about offal,” she says. “I’ve gained a real appreciation for the whole animal.”

At home, however, she likes to keep things simple. When friends come to stay, Jessica—who lives with her husband and daughters, Desiray, 7, and Freya, 2—gets up early and prepares a feast of eggs Benedict. “I’ve done an Asian-inspired benny using lemon grass and ginger in my hollandaise,” she says. “Eggs Benedict is like a blank canvas—you can do anything with it.”

Sometimes a blank canvas is not so inherently tasty—like the mystery items Jessica was presented with on Chopped Canada. It takes creativity and tenacity to turn beef short loin, hummus, yellow mustard and candied-fruit rolls into an appetizer in only 20 minutes, and it takes genius to make it delicious. It’s those qualities—but, happily, not those same ingredients—that Jessica brings to Charbar.