How To Help Someone Leave An Abusive Relationship During The Pandemic

And why there's never been a better time to advocate for systemic change. 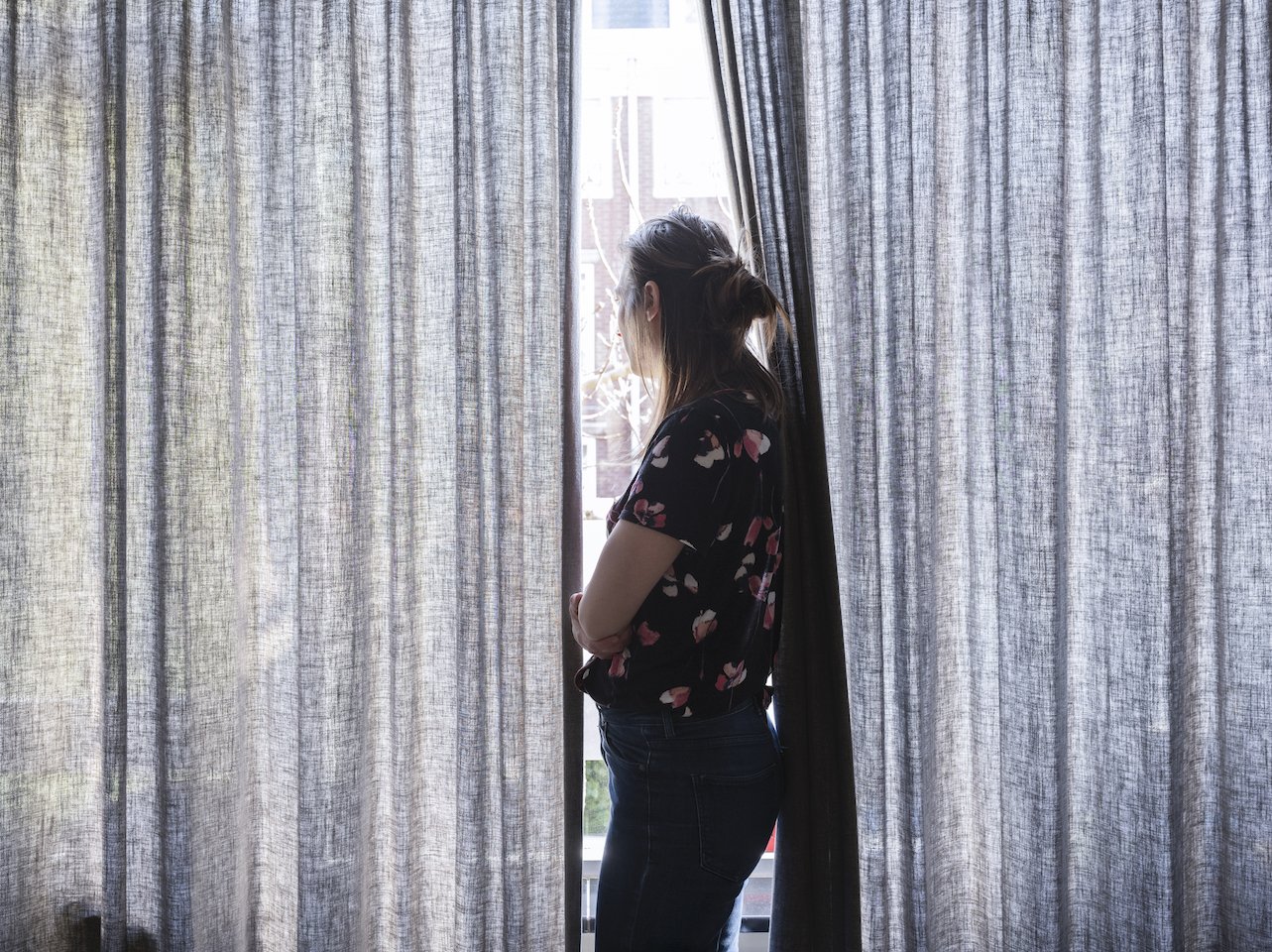 The ways to support a woman transitioning out of an abusive relationship don’t change greatly during a pandemic. You still need to believe her when she tells you things are bad. You have to stay in touch. You have to abstain from judging her when she stays. And you need to tell her what local supports exist. However, some actions are now even more crucial as a result of the strict social isolation measures brought on by COVID-19.

“Check-ins are more important than ever,” says Ginger MacPhee, executive director of Chrysalis House, a shelter in Nova Scotia.

Phone calls, texts, FaceTime, socially-distanced driveway chats—staying in touch however you can is imperative. Smith sees a direct parallel between the isolation brought on by public health measures and that which is endemic to abusive relationships.

“Both involve isolation and fear and terror and the inability to connect with someone else.”

Use code words or visual signals

Communicating distress when you’re under the thumb of an abusive partner is always a challenge. During social isolation, when women are living under duress 24/7, it can be even more difficult. Smith encourages people to establish code words or visual signals to overcome these challenges.

She mentions one woman who incorporated the colour of her T-shirt into her safety plan: “It was a flag she used to communicate with people in her life when she was outside gardening.” Depending on what colour the woman was wearing, her neighbours and friends would know whether she was okay—or if she needed them to call 911.

MacPhee suggests asking questions that demand only yes or no answers—“Are you in immediate danger?”—so women don’t have to describe anything but can easily indicate whether they need help.

The Canadian Women’s Foundation has created a hand signal for women to use if they can’t verbally communicate their distress. Smith advises people learn it.

The Canadian Women’s Foundation is encouraging people in abusive domestic situations to use this hand signal in video calls if they need help during the pandemic.

Abusers have gotten creative in their approach to harm, says Smith. She’s had women tell her some men are purposely flouting social-distancing rules in the hopes of infecting their partners.

If you’re concerned about the immediate safety of a loved one, treat it as an emergency. Don’t be afraid to tell a friend or family member you will come and get them—even if you have to do so wearing a mask and gloves.

Assure her that shelters are open and safe

As in non-pandemic times, familiarize yourself with local supports so you can share the information. During a pandemic, it’s even more helpful to let women know shelters and support services are still open and that they’ve adapted to respect social-distancing guidelines and public health concerns.

On March 18, the federal government allocated $50 million to help domestic violence shelters, sexual assault centres, Indigenous on-reserve emergency shelters and various other gender-based prevention services and supports meet the immediate demands of operating under COVID-19. Canada’s more than 550 shelters and transition houses got about $26 million of that money (Quebec is distributing its portion of the funds on its own).

The money was used to purchase necessary PPE and cleaning supplies, pay staff and provide wage increases, as well as fund alternative housing.

“We usually operate at capacity or over-capacity, but we’ve had to reduce to 75 percent capacity so we can accommodate social distancing measures,” says Smith. “Now intakes are screened and isolated for a period and counselling is done largely over the phone or virtually via iPad.”

Though shelters like Interval House have had to reduce their capacity to maintain social distancing, many have also worked with local partners to find alternative safe housing.

“If a woman is reaching out for safe shelter it’s our job to find it.”

It’s not just shelters that have adapted.

Luke’s Place Support and Resource Centre in southern Ontario’s Durham region, a non-profit that helps women fleeing abuse navigate the family court system, has established a virtual legal clinic to connect women with lawyers throughout Ontario, says legal director Pamela Cross. (Rise Women’s Legal Centre in B.C. also has one.) Taking advantage of this service can help women identify if their situation represents an urgent legal matter that can be dealt with immediately, including having an abusive partner being removed or resolving an access or child-support issue. (The courts are still open for urgent matters.)

Luke’s Place also offers educational resources to women on how to search for support safely online. For instance, Cross notes, some websites have a “leave site” button that immediately redirects to an innocuous site like Google or the Weather Channel. “That way, the abuser is unable to see what she was looking at.”

Other positive changes to pass on: Legal Aid Ontario has suspended its financial eligibility test in cases of family violence during the pandemic. So, Ontario residents who want to start a proceeding or need legal advice can get help without jumping through this bureaucratic hoop.

“That is good news,” says Cross.

Continue to advocate for large-scale change

As domestic violence rates surge around the globe as a result of pandemic-related social isolation—and Canada recovers from its worst-ever mass shooting with apparent roots in domestic violence—it’s clear no single action is going to vastly improve the lives of the more than 68,000 women and children that seek safety in domestic shelters in Canada each year.

Women’s lives will not get measurably better if domestic violence shelters remain understaffed and under-resourced, if affordable housing options remain elusive, if family courts continue to ignore family violence when determining issues of access, if society fails to address how racial and economic inequities create and perpetuate harm, and if we as a collective society continue to behave as if violence against women is a one-off instead of the urgent global epidemic that it is.

Experts and survivor advocates are speaking plainly: what’s needed is the same kind of collective action and centring of expert advice that is being put into effect to deal with COVID-19.

The political will is there too.

Coronavirus has revealed the cracks in Canadian society’s foundations, especially as it relates to violence against women, says Lise Martin, executive director of Women’s Shelters Canada, a non-profit that advocates for women’s shelters nationally. (It also distributed the federal funds to shelters on behalf of the government.)

The federal government has been responsive about repairing the cracks that have arisen as a result of the pandemic. More importantly, they are doing so in consultation with the people who understand what’s needed most.

But while that $50 million addressed immediate needs, it doesn’t touch the harm done to these services as a result of chronic underfunding, says MacPhee.

Most experts and advocates believe once social isolation measures are relaxed, there’s going to be a surge of women seeking supports, from shelters and transitional housing to legal advice.

Monsef echoes this concern and says her team is working on the next stage of support with surplus demand in mind.

The Minister is encouraged by the way in which this crisis has brought provinces and territories into increased collaboration with the federal government, and she’s celebrating seeing things she formerly saw as “blue sky” ambitions—like deeming gender-based violence workers as essential and bumping up their salaries—come to fruition.

“We campaigned on a National Action Plan to prevent and address gender-based violence,” she says. (That plan had called for the government to invest $30 million.) “The ongoing COVID-19 pandemic has provided clear evidence that a comprehensive and robust National Action Plan, created in partnership with provinces and territories, is needed to address to gaps in the social and economic supports for women and children facing violence and abuse.”

For Martin, the crisis has made it clear that we need a “much bigger” plan than what was originally proposed. (For an example of what that might look like, check out this blueprint.)

So what can you do? Call your MP and MPP and let them know you want the issue of addressing violence against women to become a priority, and that you support the implementation of a comprehensive National Action Plan.

“The most significant action we all can take is collective acknowledgment of the epidemic of gender-based violence and the need for a committed and comprehensive societal approach to supporting victims and preventing further violence,” says Martin.

“If we do it small-scale, we are tinkering. It won’t lead to large-scale change.”