She became an icon with her portrayal of TV's most liberated woman in Sex and the City. Here, she opens up about her personal battles, life at 51, the return of Sex and how far a little Samantha Jones can take you. 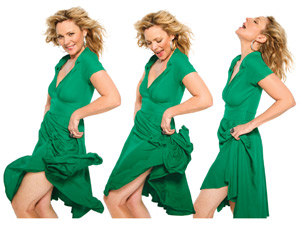 Once upon a time, there was a popular TV show about a gal in her thirties making her way in the big city. She had funny experiences with men, and fraught ones too, and every so often would sit down with her girlfriends to hash out exactly what was so great about being single. The show ran for seven years, and its playful face of feminism helped change the world. It certainly changed Kim Cattrall’s life.

She was a teenager growing up on Vancouver Island when she first saw The Mary Tyler Moore Show. It spoke to her. “I loved that fantasy of being single and having a job that you love and a workplace filled with people who are eccentric and dysfunctional,” she explains. “That really captured my imagination.”

In time, life taught Cattrall not only that she could make fantasy her reality, but that the two sometimes twist together like dancing strands of DNA in a high-school science textbook.

She is perched at the moment on a banquette in the pocket-sized in-house café of a photo studio on the west side of Manhattan, winding down from a long day spent half pretending, for Chatelaine‘s cameras, to be Samantha Jones, her onscreen alter ego from Sex and the City.

Only a few minutes ago, Cattrall was all jutting body parts for the camera – breasts and elbows and hips, oh my – but now the mascara has been wiped off, the hair extensions tucked back into the stylist’s tool kit, the outfits already on their way back to Toronto. She is relaxed and natural and looking a youthful 51 in jeans and a loose-fitting cream-coloured sweater.

In a surprisingly gentle voice, Cattrall is trying to parse exactly what SATC bequeathed to women (other than permission to spend far too much on footwear): “Being single always had such a negative connotation when I was growing up. If you were single you were unwanted, you were unattractive, you were undesirable,” she notes. “I felt that. If I didn’t have a boyfriend, I didn’t have an identity.”

While SATC originally aired only on HBO, in syndication it has been everywhere, pulling in new audiences of giddy single women and making old fans feel as if it never went away.

When the post-feminist series signed off in February 2004, Cattrall resisted pleas for a feature-film version, saying producers had provided her with neither a script nor a salary offer that was satisfactory. She fought it out. (And even Sarah Jessica Parker, SATC‘s alpha earner, has acknowledged Cattrall’s battle was justified: “If I had thought it was any of my business at the time,” Parker said recently, “what I would have said is, ‘Isn’t it okay for Kim to think that the money wasn’t right?'”)

And now, fans finally have their movie. For Cattrall, though, the four years leading up to this point were an intense time of separation from the series, full of the highs and lows that come to many women (and men) when they crash into their fifties. That’s one of the reasons – other than money – she says it took so long to acquiesce to requests for a movie; she needed to take stock of her life.

“I look back at those four years – I can’t believe I got through it,” she says, with a faint shake of her head. “My job of eight years was coming to an end, and I was going through a really rotten divorce, and my dad was diagnosed with dementia, which was the cruelest thing of all.” She was also playing jack of all trades with her Toronto-based company, Fertile Ground Productions; producing a documentary and a companion reference book, Sexual Intelligence; and writing an advice book for young adults, Being a Girl: Navigating the Ups and Downs of Teen Life.

“I wasn’t really thinking about anything other than what was right in front of me, and dealing with so many personal and professional conflicts, and I think that’s why it was so important for me to go home and be around people that I had known for decades. People came back into my life that I hadn’t seen for a very long time.”

Home is still Vancouver Island, where her middle-class British family – her father was a builder and ex-officer of the British Army, her mother a housewife – settled after leaving post-war Liverpool in the late 1950s. There, no longer at the mercy of producers, Cattrall spent time with her family, helping her dad.

Home is also Toronto, where Cattrall still has many old friends from the days when she was part of the city’s 1970s alternative-theatre scene. It was a world away from sleepy Vancouver Island, but her family cheered her along, driving halfway across the country to Toronto to see her star as Janet in the The Rocky Horror Picture Show.

In the early 1980s she made the jump to movies, standing out in proto-Samantha roles, as a sexually voracious gym teacher in the frat-boy comedy Porky’s, and as a love interest in Police Academy. Both roles, in a way, prefigured the jobs she would land over the next decade, playing lively variations on shopworn male fantasies: a mannequin come to life in Mannequin, and a member of Captain Kirk’s crew in Star Trek VI: The Undiscovered Country. If the parts weren’t deeply written, their paydays allowed her to keep returning to the theatre.

SATC, which came along in 1998, finally mined Cattrall’s unique talents, giving her a role that blended aggressive sexuality, physical comedy and haughty urbanism that glanced back to the grand old days of female vamps like Mae West. With Samantha Jones, Cattrall was both everybody’s fantasy and nobody’s baby.

In the new film, Samantha is the same sexually brazen, independent woman, now bicoastal and five years into a monÂ­ogamous relationship. She lives in L.A., tending to the personal and professional needs of her hunky actor boyfriend and PR management client Smith Jerrod, though she jets back to New York often enough to shop and lunch and drink and gossip with Charlotte, Miranda and Carrie.

The movie retains the series’s saucy nature, featuring one scene in which Samantha adorns her naked body with homemade sushi for her boyfriend to enjoy as a Valentine’s Day surprise. “Could I do that as Kim? No. No!” says Cattrall in mock horror. Really? She has body issues? “I’m a real woman,” she laughs. “Of course I do.”

Samantha was an act of fearlessness. But it wasn’t her only one. After SATC went dark, Cattrall flew to London to tackle the gruelling lead role in a 2005 West End production of Whose Life Is It Anyway?, winning praise as Claire, a quadriplegic fighting for the right to die. Like Samantha, Claire will not be denied what she desires. “I was looking for something that was so completely different, but that had aspects of what I had been doing,” Cattrall explains.

She enjoyed being back in the land of her birth, and back onstage: The following year, she starred as an abandoned wife in David Mamet’s crushing drama The Cryptogram.

When she returned to this side of the pond, she made herself a new home, buying an apartment on the Upper East Side. Her previous place was too full of memories of her marriage to her third husband, Mark Levinson. Together, they had written the bestseller Satisfaction: The Art of the Female Orgasm, in which Cattrall revealed her own story of a late-blooming sexual enlightenment; but the book was more successful than the marriage, which finally shuddered to a close in late 2004. Nowadays, when strangers tell her how inspiring they found Satisfaction, she smiles modestly and thinks of the book as the child that she and Levinson never had.

So, in a way, the new apartment is Cattrall’s first adult home, and it is a new beginning. “I was always living ‘student lite,’ because I was never home,” she recalls. “I’d get up at 5 a.m., and I’d go to bed whenever I’d get home from filming. I felt it was time to kind of take care of myself, buy myself an apartment and have it decorated. And now I wake up and think, Hey! I like this! This is good!” She laughs, a cascade of ripples that is more effervescent, and less self-conscious, than Samantha’s throaty chortle.

By the time cameras began rolling on the SATC feature last September, Cattrall was ready for it. “I’d missed Samantha in a lot of ways. I’d missed being written for like that. And I missed the chemistry that we had,” she says.

“It felt like an old glove. I felt like I was bringing more of myself. And I think one reason is that in those four years between the show and the movie, I turned 50. That’s a huge milestone for a woman. But you turn 50 and the next day it’s like – it’s no different.” She found herself, almost imperceptibly, relaxing more in her performances.

In her personal life, too. Since 2004, Cattrall has been playing a real-life version of Samantha Jones, dating the 29-year-old Canadian personal chef Allan Wyse. The fact that he lives in Toronto is just fine with Cattrall. “He has his own life, you know? It’s really nice to be with somebody who loves what they do and doesn’t get freaked out or possessive or jealous or anxious when you’re not there.” At the end of the series, Samantha and her boy toy, Smith Jerrod, walked off into the sunset; in the new film, they run into trouble. So the fact that Cattrall has herself landed and kept hold of a younger fellow suggests that she has not just made fantasy her reality, but in fact has trumped fantasy itself. She is told it must be fabulous to have a 29-year-old boyfriend. “You ain’t kiddin’,” she says in a throaty purr that is, for a moment, unmistakably Samantha. And then Kim Cattrall smiles, almost bashfully, and Samantha Jones is gone.

Are you having enough sex? Take our quiz and find out.